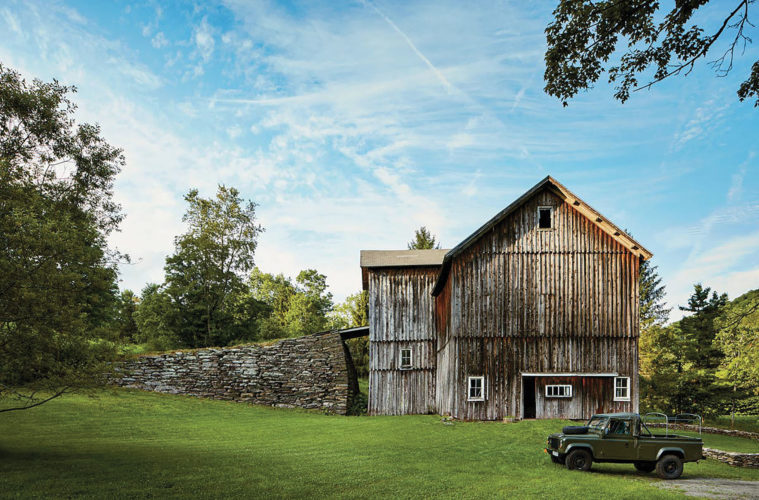 Spring greeted New England with the usual mix of sunshine, alluring warm days, heavy rains and lots of mud. The Easter Bunny had to bring along a snow shovel in order to complete its work. Our dirt roads began to resemble the trails in Jurassic Park after the dinosaurs had run amok; the paved roads look like the ones crumbling in the movie 2012.

Despite the many challenges we confront, readers took the time to share their Sightings with other enthusiasts. We thank all of you for your contributions and hope that you’ve found time for your Land Rovers, too.

It’s always helpful for veteran and novice Sighters alike to review the rules that govern when we award a coveted mug:

Rule #2 – If your Sighting doesn’t really surprise you, it won’t surprise us, either — thus we can’t award you a mug. We’re delighted, but not surprised, that Land Rovers appear in British television programmes, British publications, films with British themes and shows about African safaris. These Sightings are appreciated, but not mug-worthy.

Rule #3 – At an ever-changing date before publication, we close off the Sightings; for this issue it was April 30, 2020. If we’ve mentioned the Sighting in an earlier issue, we might not mention it again. If you’re new to the family of Land Rover enthusiasts, you may not have known that your Sighting appeared in an earlier issue.

Advertisers continue to adore Land Rovers. Adam Setliff, Flower Mound, TX, spotted a Discovery II in the opening sequence of a Method Race Wheels commercial online. Huckberry, featured in our Fabulously British column in a past issue, is so in love with their Land Rovers that they’ve named a pants line “Rover” and tout it on the rear of a Range Rover, noted Mike Howell, Seattle, WA. Jason Sheehy, Mount Sterling, OH, spotted the Range Rover classic tailgate in an online ad for the British shotgun purveyor James Purdey and Sons. Lyndon Nolan, Boise, ID, was pleasantly surprised to see a Defender 110 on the home page for the California-based Nomad Goods. Brian Dodge, Litchfield, NH, and Gary Hatch, Lancaster, OH, couldn’t miss the Series Land Rover on a Buffalo Jackson Trading Company social media ad.

Ann Williamson, Sharon Springs, NY, and her son, George, spotted a Series Land Rover in another online ad for the South African leather goods company, Melvill and Moon. Mark Lambton, Dennis, MA, and Rob Gatnik, Milton, MA, spotted a Series Land Rover on the back cover of the Free People catalogue. The VOORMI Company put up an outerwear online post that featured the front fender flare of a Defender, noted Randy Webb, Halifax, NS. Steve Stricker, Oxford, MS, enjoyed seeing a Hagerty television commercial with a Defender fording a river. Gary Hatch, Lancaster, OH, and Jacob Berchtold, Lake Oswego, OR, noted a Scottish Land Rover crossing a stream in the Best Made Field Guide. Peter Haarala, Herriman, UT, shared an online ad for Skyroam, a remote connectivity company, who sought to project its image through the wings of a Defender. Jason Sheehy [see Rule #6] noted that a Defender 110 is used in a Drive Coffee Instagram promotion. Ryan Lowe, Ellington, CT, was attracted to a Mavic Air Instagram feed, not only because of its product, but because of the Defender 110 in its ad.

Magazine articles often feature Land Rovers. Engine Professional is the quarterly publication of the American Engine Rebuilders Association and P.T. Schram, Churubusco, IN, enjoyed reading an analysis of a Series I engine rebuild. P.T. spotted a Range Rover Evoque in a Jalopnik online story about the pandemic’s impact on Chinese auto production. When Architectural Digest sought to impress readers in an article on Tory Burch, they staged a shot of Ms. Burch in her Defender 90, in front of her mansion. A New York Times article on upstate New York farmhouses celebrates “Americana”, but the featured farms also include Defenders in their accompanying photos, noted Loic Fabro, Herndon, VA. Bill Schimikowski, Westborough, MA, enjoyed seeing a Range Rover Classic on the cover of Field & Stream magazine. Eric Sousa, Melrose, MA, owns and enjoys the “exceptional cargo capacity” of his Discovery 5, and noted that when a Boston TV station needed to show a shopper hoarding toilet paper, they chose a man stuffing multiple cases into a Discovery. Clay Devening, Lexington, VA, liked reading about the 1959-60 Trans Darien Expedition in National Geographic. Josh Sabo, Montvale, NJ, found a January 2018 cover of the Jehovah’s Witnesses’ Watchtower magazine, with a Defender 110 on an airstrip in Bolivia. Isabelle Atkinson, Williamstown, NJ, comes from a Land Rover family with an ’04 Discovery II and an LR4. In a LOCAL Life South Carolina magazine article, she noted that a local business executive showed off his ’87 Land Rover 110 and his Porsche 917K replica — nice combination!

Television producers and filmmakers alike appreciate the impact of Land Rovers in their productions. Perhaps the best evidence of this comes from P.T. Schram, Churubusco, IN, who spotted a Stage I 109” in a documentary about Stanley Kubrick. P.T. also spotted a Series Land Rover in Costa Rica in the film, The Last Thing He Wanted, and a Fox News story on an LR3 or LR4 crushed in a Zagreb earthquake. A sharp-eyed Ben Sands, Gaston, OR, watched an orange Discovery II and a Range Rover Sport in the background of a Curb Your Enthusiasm episode. Gretchen Lane, Saco, ME, was pleasantly surprised when a Series III Land Rover appeared on an episode of The Guild as “they usually deal in higher-end cars.”

In person Sightings are increasingly reported to us. Kraig Mackett, Perrysburg, OH, noted an LG display at his Costco featured a Defender sending up a rooster tail of water. George Hughes, Flemington, NJ, spotted a Defender 110 adorning the packaging of a High Sierra lumbar support cushion — which seems appropriate. Chris Browne, Sherborn, MA, noted a BBC report on mass teddy bear hunts meant to ease tension in children during the pandemic — a 110 in New Zealand, “loaded for bear,” caught his eye.

We’ve mentioned these before, but we want to commend Sighters for sharing their finds with us. Tom Martin, Chardon, OH, enjoyed the Pelican case online ad using a Defender roof for visual impact. P.T. Schram, Churubusco, IN, spotted a black Defender 110 in an episode of Narcos. KC Jones, Santa Ana, CA, Tyler Neilson and Nora Thomas, Savannah, GA, who was “off school because of the pandemic” spotted a Series IIA in a Land’s End catalogue — continuing a company tradition. Ann Williamson and her son, George Nelson, Sharon Springs, NY, enjoyed watching Cars 3 for the first time and seeing a “Range Rover, just like the one we own,” on the screen. Lisa Monish, Pensacola, FL, enjoyed the Defender 110 on the Matador Nanodry towel website. Matthew Flanagan [see Rule #6] noted a Land Rover 110 on the home page of Firestone Tires.