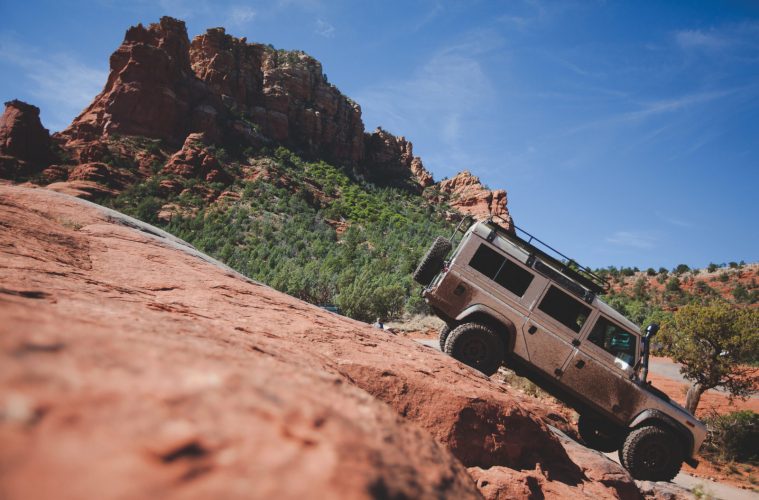 Letters to the Editor: Holiday 2015

Dear Rovers North,
We are overlanders from Brazil who met Jeff Aron- son of Rovers Magazine at the Overland Expo in Flagstaff, AZ. We are in NY driving north to Canada in the next few days. I don’t know if we are going through Vermont and Montreal, or Port- land and Nova Scotia, but it would be great to touch base. By the way, we have a huge crack in our windshield and I’ll probably need to substitute it. Is there anyone I could talk to get an estimate to change the windshield?
Dan Suguio
Defender 110

[Thanks for the link to your website, www.zanzando.com. If you stop by Rovers North in Westford, VT, I’m sure we could help you find a replacement for your windshield. We enjoy meeting overlanders on their world travels —ed.]

Dear Rovers North,
As an avid photographer, I recently began researching wet plate photography and stumbled upon Borut Peterlin in Slovenia on YouTube. Borut is quite a character and actually well known. He acquired his Land Rover so that he could build a dark box, install it in the vehicle and travel off-road to shoot wet plate collodion on sight. More recently, he has added photography safaris to utilize his talents and his Land Rover.
Adair Wymore
Oxford, MS

[It’s always great to see Series Land Rovers in daily use. Thanks for the tip; we’ll enjoy watching his videos —ed.] 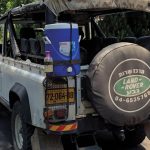 Dear Rovers North,
During a visit to see my daughter, Jenny, who works in Israel, I found this Defender at play. In classic Land Rover style, you’ll note it’s parked in a “No Parking” zone in Kfar Blum in the upper Golan reion. This is the most popular kayak and rafting area in Israel, where the Hatzbani and Jordan Rivers merge to form the Jordan River which flows south to the Sea of Galilee.
Michael and Jenny Smith
Montgomery, AL

[That must have been a wonderful trip, Michael, capped by spotting the Defender! —ed.] 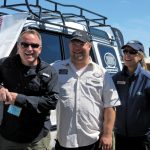 Dear Rovers North,
We’re very excited about the registration for the Western National Land Rover Rally in October. Right now we have just over 100 Rovers from 16 different states and three countries. We thank you in advance for your support and hope that Rovers North can attend this event!
Doug Lawyer
Chairperson, Western National Land Rover Rally
Sedona, AZ

[Zack Griswold of Rovers North has reported he had a terrific time at the event. Congratulations to everyone who made it happen —ed.]

Dear Rovers North,
A photo in a local magazine featured a series Land Rover and that triggered a memory. I’m a friend of the guy who owned the Land Rover dealership in Charleston, SC, back in the 1960s. Donald Brown and his parents had a small foreign parts store on the south side of town, west of the Ashley River. At different times they were dealers for SAAB, DKW, NSU and Rover. When I met Donald in 1974, he was driving a Rover P5 sedan. He had been a Land Rover dealer back when all you did was show you had a place to work, buy a kit of parts, and be able to go to Jacksonville and get the vehicles.
John Dillingham
Canton, GA

[John, we know you go way back as a Land Rover enthusiast and reader of Rovers Magazine. Thanks for sharing the memory! —ed.]

Dear Rovers North,
It was great to meet Zack Griswold and Jeff Aronson at SCARR in Texas, and again at the Sand Rally in Florida. I’m looking to see if there are other enthusiasts in Louisiana who would like to join me in creating a Louisiana Land Rover Owners Club.
Tony Parr
Livingston, LA 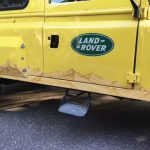 [What a great tribute to the Camel Trophy years, Dave. Thanks for sending the photos —ed.] 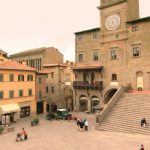 [Land Rovers are much loved in Italy and are used by the police and military there. We hope you saved us a piece of cake —ed.] 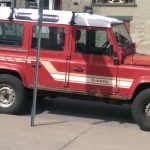