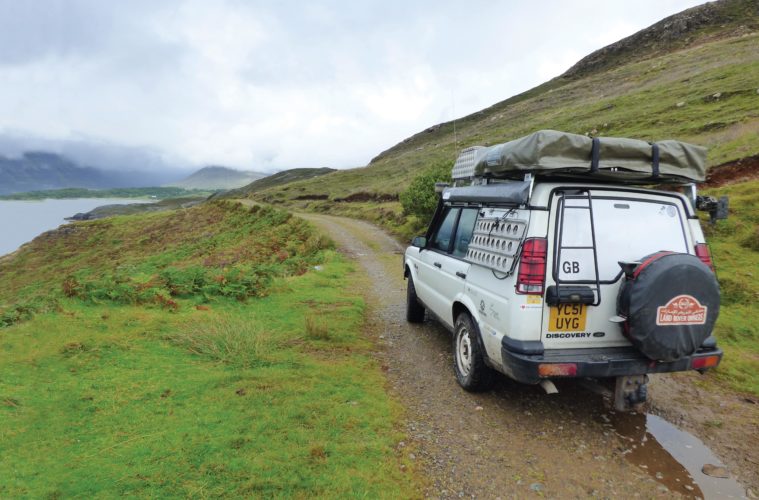 It’s very apparent that there’s a huge disparity between the prices of the early Discovery models and Land Rover 90/110s and Defenders on both sides of the Atlantic. A good project Disco can be picked up for around $2,000–$3,000 in the US – and for around the same in Sterling in the UK. Defender prices can rise to ten times this – or even more. It’s this price difference that makes many Land Rover owners look at the Discovery – in many cases, with the hope that the vehicle can be turned into an overland or expedition vehicle.

However, is it a realistic hope that a Discovery I or II can serve as a proper overland or expedition vehicle? Is a vehicle anywhere from 25–31 years old a good choice for remote travel? Not only a good choice but a very realistic one.

I’m lucky enough to own both a Discovery I and a Discovery II, and I’ve worked on them to the extent that I press them into daily driver service and regular, single-vehicle remote desert travel. My Discovery I has just brought me home safe from the deserts of Oman to my base in the United Arab Emirates (where I live for half the year) and my Discovery II took me to the Sahara this last summer from home in the UK; before that, in 2018, she carried me across Europe, through the Balkans to Albania and Italy.

The Discovery is the vehicle that saved Land Rover in 1989. When the Series and Land Rover 90/110 models had become too utilitarian in the face of more comfortably appointed US and Japanese competition, the Discovery arrived as a mixture of the off-road capability of the Defender combined with elements of Range Rover comfort. The Range Rover itself had vanished far upmarket; no longer the farmer’s family car – more the car of the landed gentry,

Those early Discoverys in some cases led a pretty hard life. Many were worked on by non-specialist garages, unfamiliar with the Land Rover marque. Some were worked on by mechanics whose willingness was not matched by their capabilities. Some may have been fitted with substandard parts because of the perceived lower value of the vehicle. Depending on climate, the Discovery I can suffer from rear body rust and the Discovery II can develop rot in the rear chassis. New replacement parts are available, and given the relatively large number of Discoverys sold in North America, you can find used parts where new ones are NLA. Either vehicle, when properly maintained and prepared, has proven to be a very reliable vehicle. The challenge for any new owner of a used Disco is unravelling the trail of lesser-quality parts and frequent mechanical bodges before committing the vehicle to serious remote-area travel.

So, given the availability of Discovery Is and IIs at sensible prices, how suitable is this basic model for overland use? Overlanding legend Tom Sheppard, leader of the first expedition to cross the Sahara in motorized vehicles (Land Rover FC 101s), and an ex-Discovery I owner himself, once said to me that an issue to overcome is the balance between cabin space (large), engine bay size (again, relatively large) and cargo area, which in the D1 at least is relatively small, especially when travelling with more than two people. The D2 addressed this with about a foot of extra room in the rear. It’s true, however, that both models lack the cavernous space of, say, a 110. The solution is vertical storage, whether in drawer systems or lockers, or using the dog guard as a storage device in itself, perhaps with pouches attached to it, going upward. Many users also convert the two rearmost side windows into side lockers, giving access to 300 liters of easily-reached storage when the back doorway is full. Drawer units can be custom-made quite easily. If purchasing new, look for drawer systems like those of Front Runner, which use South African military-spec Wolf or Wolf Cub boxes. These mean you can store equipment in the drawers, or remove the entire box from the slider to move equipment to where it’s needed in camp.

However, as with backpacks, if you have a big space available for storage, you will fill it. Many find that the restrictions on storage and weight in the early Discos concentrate the mind and so ensure you take merely what you actually need! The 1992 Anglo-US “Atlantis of the Sands” expedition led by Sir Ranulph Fiennes, the British explorer, and Nick Clapp, the California archaeologist known as the “real Indiana Jones,” used Discovery Is to find the Lost City of Ubar in the Arabian desert. It’s also true that the Camel Trophy competition used Discovery I as a superb vehicle for its trips – though with a beefy roll cage that boosted roof storage limits hugely – and of course a huge wagon train of Defenders following to carry the rest of the kit!

The relative mechanical and electrical simplicity of the Discovery I/II provides another huge plus point. Though the design depth and width of the engine bay make it a bit harder to work on than a Defender, it’s still pretty easy to get at – the sheer size of the space helps. There isn’t the same acreage of wiring that you find in later models. The engine choices are more straightforward – the venerable Rover V8 block is well-known, and once you address the tendency of older engines to drink water, they provide “enough” power (as Rolls Royce describes it!). The 200/300 Tdi engines are highly regarded as overland workhorses. For my Discovery II, I removed the original V8 and dropped in a Tdi engine and drivetrain for greater simplicity and improved fuel mileage in the desert.

It’s a real fact, also, that seven hours in a Discovery leaves you a lot less frazzled than seven hours in a Defender – plus you can hold a conversation at something less than a yell during those seven hours. You’ll probably travel further too, thanks to the higher gearing of the Discovery transfer box. The lateral space, and front and rear legroom, are all much greater in a Discovery. Plus the seats are far more comfy (though the storage space underneath is considerably less). This means you don’t need the ‘elbow sticking out of the open window’ driving position – unless you like it! They tend to be more family-friendly too – climbing into a Discovery, and seating once inside, is far easier than in the 1950s-era ergonomics of a Defender. And the air conditioning, if fitted, is more effective.

I’m not poking at Defenders, by the way; I own two, one in which I’ve racked up 350,000 miles – mostly African. I think Defenders are the best cars in the world! But, like really big dogs or heavy draft horses, they are an acquired taste – much more old-school. A Discovery is much more of a vehicle for all seasons and all reasons.

It has been suggested that you should drive an overland vehicle as if it were glass – it has to get you home again, often from pretty wild and woolly places. This is true, but there are times and places where only a big right foot and some serious axle twisting will get you through. Discovery I/IIs possess these capabilities in spades, along with a merciful lack of the (if admittedly very effective) electronics you find in later Land Rovers. Instead of Terrain Response you find enormous axle travel, a torquey engine, good approach and departure angles (the reason for the shorter trunk size) and a proper center diff lock. It doesn’t matter that a Discovery I is 31 years old; that old dog doesn’t need new tricks – when well-maintained, it remains a tough and capable expedition and overland vehicle in all respects.

The early models of the Discovery addressed what the market required at the time – more creature comforts and road performance, traded off against slightly diminished utility and the extreme off-road capability of the Defender. They did it very successfully, becoming the biggest-selling SUV in both the UK and Europe at various times. At the same time, they proved themselves very useful and capable overland vehicles, many of which still chase horizons in the Americas, Europe, Australasia and Asia – and will do so for many years to come.