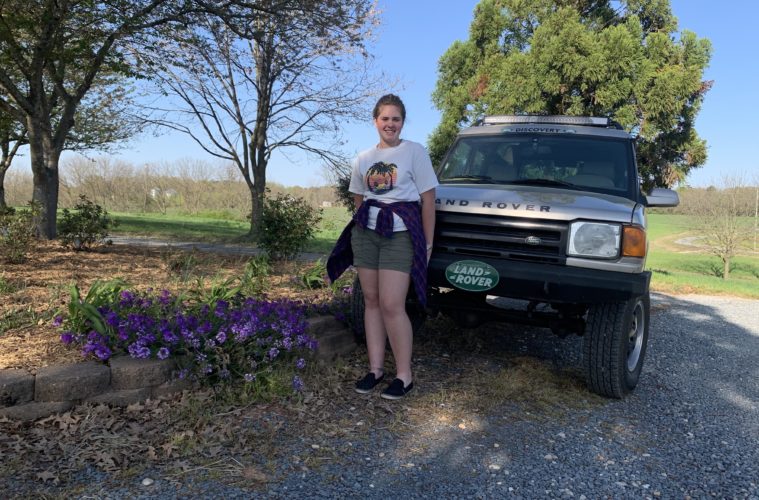 If people were machines, life would be easy; one action toward another person would cause a predictable reaction. It would be the same every time – no mood swings, no quirky responses, no different styles and no mystery. Every interaction would be formulaic, determined by the machine. All you must do is start up the machine. But people are different. Every person has different genetics, has had different experiences and has different reactions. There is no easy-to-read manual, “Repairing People For Dummies,” with big pictures and large print. It’s also what makes people so fascinating.

People are made up of flesh and blood; old Land Rovers are made from aluminum and steel. Every hammer-driven rivet, every hole drilled by that guy who never could get them centered, every wire that’s over-crimped by a fun-loving, left-handed enthusiast. All of these things make a Rover a Rover, giving each one an undeniable character – just as peoples’ quirks give them their character. So, every time you try to do something and it isn’t a 5-minute ‘fix,’ every time that plug and play part has to be drilled and cut to fit, every time you lose the ½ inch wrench and the holes won’t line up, remember – if it always started when you turned the key there would be no adventure, no romance, no light in your eye when you hear that engine purr. There would be no memories of “hold the flashlight straight.” No feeling of pride when the guy at the Post Office asks my dad, “Where’d you get that thing, Bo?!” No holding hands because there’s not enough heat – again. No friends made with that guy at the gas station who shares your passion. No seeking out hills to make a possible push-start a bit easier. No fun.

You may get sick and tired of everything going ‘wrong.’ The parts never seem to fit – nothing works how the Green Bible says it will. But, this is what makes Rovers so fascinating. Without this there would be no room for creativity, no sketching the design out to customize it to your taste. You would never learn the lessons you receive from Land Rovers if everything went as planned. Many of my earliest memories of these vehicles came from the moments that messed up our whole day.

Our Land Rover story started almost 60 years ago. As a kid, every Sunday, night my dad, Dale Knepp, would huddle around the TV with his family to marvel at the Series Rover on Mutual of Omaha’s Wild Kingdom. It would take 30 more years for his dream of owning a Land Rover to come true. In 1993, at age 39, he purchased the first NAS Defender 90 sold in Charlotte, NC. Two years later he met a fellow nurse, Renee Griffin, who later became his wife and my mom. He would pick her up in his AA yellow topless 90 for countless chilly dates. Little did she know she would one day be trekking up the sides of trails in the Uwharrie National Forest with two toddlers. She would help put on graphics, hand him tools, bring him cool drinks on those blistering summer work nights when his hobby became his vocation. He had no clue she would later be in the passenger seat in the middle of Belize, with 2 kids in the back, reading an English map and looking for Spanish road signs. He didn’t realize she would be playing a real-life game of Pictionary trying to ask some Mexican gentlemen for tools, or helping push-start the car each morning. Neither of them knew what they were getting themselves into. Through their Land Rover experiences, they created a truly wonderful life for each other, and for us.

My greatest Rover adventure to date is from another country altogether. I was a wide-eyed and bushy- tailed third-grader, adorned in my wide-brimmed floppy hat, poking out of the window – well, at least as far as I could get out a window that only goes half-way down. I was soaking up the scenery of a new place for me – Belize. As we trekked through the jungle to our platform tents in a Defender 130 I was sure to keep my eyes open for a blue morpho butterfly (still on my bucket list to see). We would later watch the locals traverse the river in their dugout canoes, and fall asleep to the sounds of howler monkeys playing in the trees.

The next morning we ventured out in the Defender to explore the ancient pyramids, and later to volunteer at a nutrition center for children in the mountains of Guatemala. During our time in Central America we crossed rivers and saw a lake situated inside a volcano. For me, the most amazing parts were my cultural experiences. I lived the most amazing Easter week of my life. On Good Friday people lined the streets and crafted the most exquisite ‘murals’ on the pavement with dyed sand that was brushed away by traffic the next day. The local people spent an entire week celebrating their religion with parades and reenactments. It was unlike anything I’d ever seen before, or since.

A few days later in Mexico we piled back in the Rover after filling the truck with fuel, and ourselves with some delicious, albeit orange, chicken sandwiches as our last stop before returning to the States. Dad went to start the 130 – nothing. We had traversed three countries and now we were sans so much as a buzz. As we were trying to figure out what the remedy might be, we met a few very kind Mexican gentlemen. They were nice enough to give us a push; the Rover started up again, and we were on our way. The adventure certainly did not end there; we drove all the way back to “North Cackalacky” (military brat slang for North Carolina) parking on top of hills and thoroughly enjoying every moment.

Spending around 4,000 miles in an aluminum projectile with a 10- and 8-year-old may not sound like your idea of fun. Some thought my parents were out of their minds taking two kids on a 3+ hour plane trip to a different country altogether, and driving back in a car that we had to push start every morning. They’re wrong.

I learned lessons there that I can’t even put into words. Those two weeks I spent accidentally kicking the seat in front of me, squeezing out of those slanted second-row Rover doors, losing my patience with my brother and learning all the little quirks in a Rover that you don’t even think about until you’re in the backseat for 100+ hours – they form some of the best moments of my entire life.

I truly believe that this is what makes the Rovers so extraordinary: the people – those you meet along the way and the memories you make with them that will stay with you longer than any possession you may buy. Saying you are a “Rover person” is not just owning a Landie – anyone with money can purchase a title. It’s being part of an international community that shares an unrivaled camaraderie, like our local SC Lowcountry Rovers. It’s helping out a friend who doesn’t know that one trick, it’s meeting someone on the side of a highway to give you a hand. It’s learning not to get in too big of a hurry, but to slow down and enjoy the adventures of life with the people you love.

Six months ago I finally got my driver’s license. I had started learning by traversing the driveway with my mother, Renee’s, guidance in our gold ‘06 LR3 (Goldie). I had the blessing of a quarter-mile long driveway to learn the art of driving from my parents, and I had started driving the 30-second trip to church around the corner at age 13. Now, I spend my afternoons in low range in a gold Discovery I Tdi, going up and down the driveway with my dad and brother trying to learn the art of feeling what is going on under the hood, and how and when to change the gears myself – instead of letting a machine do it for me.

Growing up, our Land Rovers enabled me to go on adventures without ever leaving the garage. I used to sit in our tri-colored, hodge-podge Defender ‘90, named “Fish Taco,” and pretend to drive. Where to? I had no idea, but I can assure you I had the time of my life. My heart fluttered with the fantasy of one day being able to master one of these machines myself. My mind exploded with the possibilities of the places I would go and the cool things I was sure I would see.

Through my Rover adventures, I have lived the words “perseverance” and “adventure.” Our Land Rovers, and my family and friends who love them too, have steered me as much as I have them. They’re a part of my DNA. I learned countless lessons from the Land Rovers and from the people I love who brought me along for the ride. Don’t fear adventure: go explore the world, play in the mud – enjoy life. You only get one crack at it.

So, the next time you grumble about ordering parts all the way from Rovers North and contemplate selling your Land Rover to get a new Bronco or Jeep, think of the fun, remember the memories, fill up the fuel tank, laugh and let seat time in your Rover help you experience the richness of life.