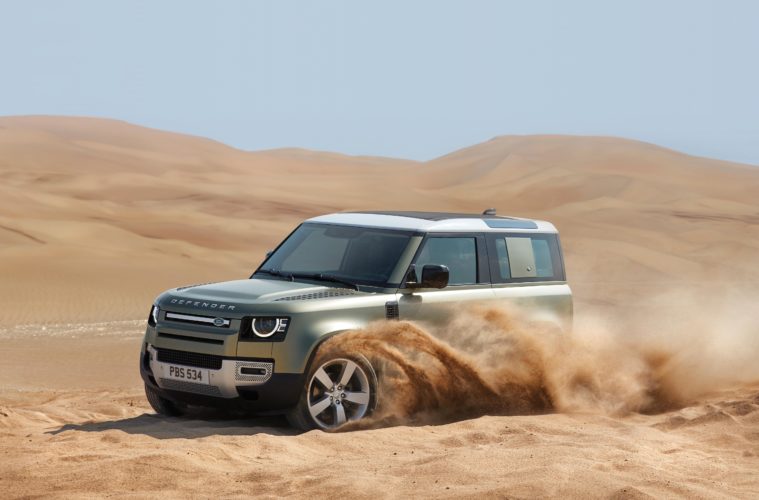 When the Land Rover 90 succeeded the Series III in 1984, Series enthusiasts complained of how “big” the new model had become. The Land Rover 90 morphed into the Defender 90 in 1991; now it’s the turn of those owners to moan about the corpulence of the 2021 Defender 90.

It’s true – the new Defender 90 is longer, lower, wider, and heavier. The original “90” actually had a 92.9-inch wheelbase, but the new one stretches “90” to 101.9 inches. It’s 8.1 inches wider and a whopping 917 pounds heavier. The culprits are the required crumple zones as well as RoW pedestrian safety regulations. Fuel economy is 22 mpg highway and 17 mpg city, for an EPA average of 19 mpg.

The extra safety features reduce the approach angle from 51 to 38 degrees. On paper, this makes it less desirable off-road, but the Terrain Response 2 and other drivetrain features make it far more capable off-road than its beloved and coveted ancestor. For example, the new Defender 90 can tackle a steep approach at an angle without slippage, rather than head-on, minimizing the impact of a reduced approach angle. That’s also thanks to the additional 10 degrees of side slope tilt over the classic 90.

The new 90 handles better due to its torsional rigidity (three times stiffer and ten times more rigid than the original) and independent front and rear suspension. The front-seat passengers will enjoy more comfortable seats; your friends in the rear will still feel cramped. Everyone will also have every safety, connectivity and emissions feature required for and expected in contemporary vehicles.

There’s every reason to applaud the driving capabilities of the Defender 90, just as we did with the Defender 110. It shortens the already impressive D7x aluminum platform from the 110, and shares a similar engine, transmission and brakes with its larger sibling. From the A-pillar forward, they’re very much the same vehicle – until you open a front door.

If you’re of a certain generation, you remember the struggle of opening the gargantuan, heavy doors of two-door cars. Maybe you had to buckle a squirming child into a car seat, too. It did not take many repetitions to convince you that your next vehicle would have four doors. The new 90 moves the front seat forward electronically – albeit slowly – in an attempt to lessen the gymnastics required to access the rear seats. I wear leather hiking boots daily and my big feet could barely squeeze past the seat back. Once you’ve squirreled yourself into the rear seats, you’ll probably want to stay put.

Land Rover promotes its optional front jump seat. When folded down, the seat back becomes a cubby box and drink holder. Flip it up as a seat and offer it to someone with whom you’re really close. You’ll find the fixed headrest blocks rearward vision through the rear-view mirror. Conveniently, the rear-view mirror can become a screen for the rear camera, assuring rearward vision.

With the rear seats in place, there’s only about 18 inches of free space between them and the rear door. The rear seats do fold forward (as do the rear headrests, but they drop only to a 60-degree angle. The rear compartment also has a permanent beam to protect the rear seats from cargo. Folded down, you can still carry a lot of items in the rear tub, but they’ll need to be soft bags or foldable pieces of kit.

Here’s the solution for Land Rover. Create a “rear seat delete” option that makes the jump seat standard and opens up the rear tub for kit. How often does someone with a Defender 90 or Series SWB carry more than 2–3 people? That will open up the rear space to about 50 inches in length, with sufficient height and width for an outdoor kit or work tools.

With the same engine, transmission and Terrain Response 2 on the 90 as on the 110, it’s clear that its on-road and off-road capabilities far exceed those of our classic Defenders. You could make a Defender 90 your only vehicle without compromising road speed or safety. The wheelbase and overall length of the new Defender 90 (101.9 and 180.4 inches, respectively) match those of the Discovery I (101 and 178.7 inches, respectively), so you know it’s nimble enough for any parking maneuver or off-road challenge.

My test vehicle on the media drive was a Defender 90 First Edition (starting at $64,100). This package featured the Ingenium MHEV 3.0L 6-cylinder (395 hp, 406 ft lbs torque), electric traction control and dynamic stability control – all useful when the top speed is 129 mph (electronically limited) and 0–60 mph takes only 5.7 seconds [7.7 seconds with the I4 engine -ed]. Standard wheel size is 20 inches, shod with Goodyear Wrangler P255 60VR20 tires. Among the First Edition’s many standard features are a generously sized electric folding fabric roof and air suspension. The former gives the cabin the essential [to me] open air feel; the former includes the obvious benefits, as well as a raise-lower switch in the rear to make hitching up a trailer or loading the rear tub easier. It also comes with a folding front jump seat, ClearSight rear-view mirror, front fog lights, useful roof rails and a host of interior and entertainment enhancements.

From behind the steering wheel – my favorite place – the new Defender presents an inviting and very familiar feel. You’ll find the fully adjustable seats provide you with the same position as any classic Defender 90 – but more elbow room; the view over the hood and back to the rear allows you to easily see the corners. The gearshift lever sits just where your hand expects it to be, and the touchscreen buttons and Terrain Response options appear as intuitive as any controls found on contemporary vehicles. Bulkhead shelf parcel holes and a grab bar remain as per the classic Defender; you can even hose out the interior if required.

Off road, the Defender 90 features over 19 inches of articulation with its independent front and rear suspensions. A two-speed transfer case and locking center differential are standard; an electronic locking rear differential comes standard on certain packages. In a classic Defender, you would lock the central differential manually using the high-to-low range gear selector. In the new Defender, drivers can prevent cross-axle slip using the Center Slip Limited and Center and Rear Slip Limited options on the central touchscreen controller. In addition, there is a choice of three settings for the throttle and gearbox response, steering and traction control, allowing experienced off-roaders and all-terrain novices to tailor the vehicle set-up to suit their requirements. The system allows four individual profiles to be saved, so different drivers can quickly activate their preferred settings. Or you could just let the Terrain Response 2 system identify the surface and tire bite, and make the adjustments for you.

The new Defender also offers a Wade setting within the Terrain Response 2. When crossing water, this setting eases throttle response, shuts off heating or air conditioning to outside air, locks the driveline, increases the ride height and activates the Wade Sensing screen to see the depth and possible obstacles around the Defender during the ford. When you look under the hood or even inside the cockpit, you see from the positioning of the components that Land Rove anticipates a water crossing might exceed the “approved” depth of 35.4 inches (wink, wink). The same ClearSight Ground View technology also helps when cresting inclines to show the hidden area directly in front of the vehicle on the central screen; of course, you could also set the handbrake and get out of the vehicle to look before cresting the hill.

As Land Rover could not arrange for off-road opportunities on this media drive, I can only note that the same drivetrain on the Defender 110 media drive [see Holiday 2020 issue -ed.] made it supremely capable off road.

Joe Eberhardt, JLRNA’s President, reported to us that with over 16,000 new Defenders sold in the US, it’s now the second most popular model here behind the Range Rover Sport. Rob Filopovic, JLRNA’s Director of Product Planning, said, “the Defender 90 represents the second phase of Defender in the US, with more phases to come.” [Does this mean we’ll see the rumored Defender 130 pickup or Station Wagon in the future? -ed.] Despite its greater dimensions, the new Defender 90 imposes similar limitations in carrying capacity as its ancestor, but for me, it comes the closest to capturing the spirit of my Series IIAs – but without the hardships.