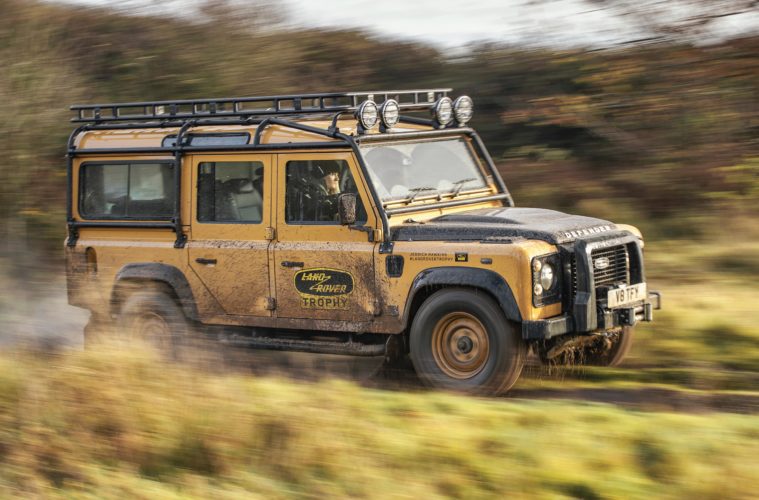 Land Rover had pulled out of North America by the time it launched the Stage I V8 in 1979. Enthusiasts here had to wait until 1993 for the V8 Defender 110, followed in 1994 by the V8 Defender 90. When the new Defender arrived, it came with Ingenium 4 and 6 cylinder engines but, starting in June, Land Rover will return to a V8 for the Defender model.

“There’s a real heritage to the presence of a V8 in the Defender,” said Land Rover UK’s Adam Southgate in an exclusive interview. “The V8 was under consideration since the creation of the new Defender. Two years ago, the adaptation of the V8 to the new Defender became a rapid development project.”

The engine is the 5.0 liter derivative of the AJ133, with 518 hp and 461 ft-lbs of torque, a significant increase from the 395 hp/406 ft-lbs of the Ingenium 6. I wondered how Land Rover would engineer the new Defender 90/110; Adam, the Senior Manager for Motion Systems at JLR, helped me understand the upgrades required for this new model.

“For the Defender, the main changes are in the calibrations of the engine. The throttle mapping is different. As the torque curve is very important in the Defender, the transmission calibration changes are most important. The maximum torque output of 461 ft lbs is available between 2,500–5,500 rpm. Terrain Response 2 will continuously optimize torque to suit the precise conditions. Each driving mode has its own calibration; holding onto higher gearing enables us to take advantage of the torque. Whether in Comfort [normal Drive -ed], Dynamic or Sport modes [using the gearshift or the Terrain Response -ed], the Defender has settings appropriate for those requirements.”

“We determined that the Defender must match its character within its Comfort mode. We want it to feel effortlessly capable on all surfaces. The V8 does this. We didn’t want to make it a screaming sports car, but you might feel that way in the Dynamic. It feels like a Defender rather than trying to make it into a Range Rover Sport SVR.”

When asked about the bushing and shock absorbers, Adam noted that “The bushings are different due to the different diameter of the sway bars, but the target torsional and radial rates are the same; no other suspension bushings were tuned specifically for the V8. The rear subframe braces required significant stiffening to deliver the steering connection.”

With more horsepower and torque should come a different driving experience. 0–60 is over in 5.1 seconds. Adam said, “The 90 V8’s steering is very much like the I6 petrol’s. Originally, the Defender had slower steering, and we chose a faster rack. There’s a different calibration because of the weight change, and we wanted to retain the proper amount of steering feel. Whether with the I4/I6 or the V8, we’ve built in understeer.”

“We’ve also built in a new active electronic differential and a yaw controller. The clutch plate in our second generation locking differential reacts in 1.5 milliseconds; we’re particularly proud of this JLR-designed controller. It estimates the load and friction level of any surface to enhance the operation of the traction control system, and does so in concert with the torque output, not just the throttle position.”

The same systems recognize changes in body angle and front/rear pitch, such as if the Defender enters a slide. “Softening the dampers [shock absorbers -ed] reduces snap oversteer. The traction control system will allow more slip, identifying the real speed of the vehicle to account for wheel slip. The stability control can recognize changes in speed yet stop the wheels from spinning uncontrollably.”

“The yaw controller aids in cornering. The rear differential stops the Defender from wanting to rotate. The JLR-developed algorithm is more pre-emotive, developing better purchase earlier in any action. It lets you have fun – safely – on loose surfaces. If you want the Defender to be, it’s your personal rally car!”

Every enthusiast knows that Defender 90 V8s can wind up in wet, snowy and muddy conditions, so I asked Adam if the digital control features of the suspension and electronic differential will be weatherproofed effectively to assure operation in hostile environments and over the long life-span of a Defender.

Adam responded, “To ensure that the electrical systems are as rugged and robust as the rest of the vehicle, Defender was the first new Land Rover to benefit from enhanced validation testing, the result of a £37 million investment in new facilities and infrastructure. As a result, the new EVA 2.0 system has been through the most comprehensive development program the company has ever completed, ensuring every aspect of the vehicle lives up to its rugged reputation.” Here’s hoping that a decade from now, enthusiasts will find the “rugged reputation” well deserved.

Three years ago, Land Rover Classic announced the creation of the Defender Works V8, available in a 90 SW or 110 SW version. They took a used 2012 – later Defender kitted it out with a 5.0L engine, ZF 8-speed transmission, electronic suspension wizardry, and sporty interior fittings. It was an extravagant way to celebrate Land Rover’s 70th anniversary that sold out immediately upon its announcement.

If you have 195,000 British pounds ($275,000 US) lying fallow, there’s a new iteration of the rebuilt Defender. Land Rover Classic has announced the creation of 25 Defender Works V8 Trophy vehicles (ineligible for US importation until they’re 25 years old).

The refurbished and much-breathed upon Defender 110 Works V8 Trophy features the same 5.0L V8, 8-speed transmission, Recaro seats, even a designer analogue clock like the ones from 2018. The all-leather interior and carpet might not be amenable to the expected mud, but you’ll love the echoes of the Camel Trophy in the exterior paint color with your name/nationality on the door.

If you purchase one, you’ll be invited to a three-day, off-road competition at Eastnor Castle, the long-time home of Land Rover’s off-road testing. You’ll receive personalized instruction from Land Rover Experience guides as well as the chance to compete in an off-road event on the 66 miles of trails on the castle grounds.

By the time we go to press, all 25 will likely be spoken for, but it’s comforting to know that Land Rover respects its heritage enough to support the rebuilding of its classic Defenders.