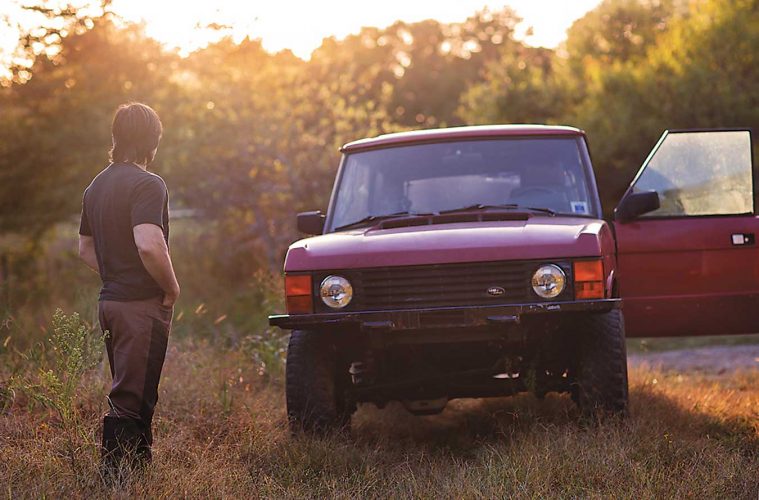 My interest in Rovers began as a young man living in Nashville, when my mom would take my brother and I to her friend’s house. The Hamilton’s lived elegantly in a massive, English Tudor-style house. I went to school for a while with Gray Hamilton, and later with his older sister, Carrie. We would all hang out in their carriage house, connected to a carport. Underneath it rested a silver, mid to late ‘80s Range Rover Classic. I remember being quite consumed with the presence of that Rover, while I ignored the Jaguar XJ-6 parked beside it. 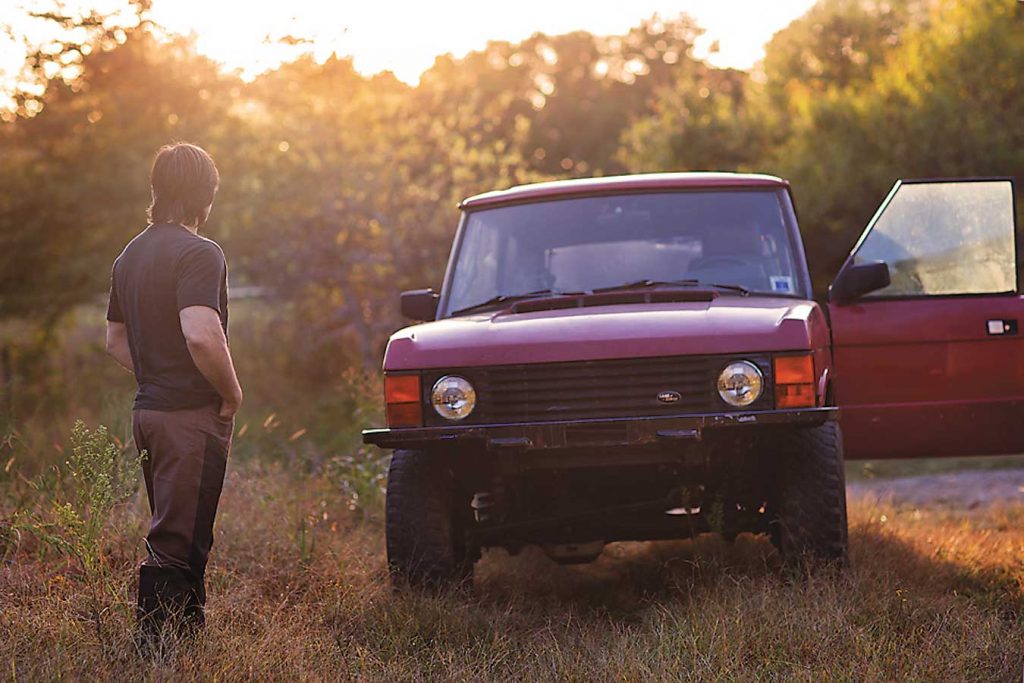 Fast forward a few years: As a high school freshman in 1989-90, I’d walk to school and always see Carrie, a senior, drive past me in the family’s Range Rover, usually in the afternoons. Given that Land Rover did not start importing the Range Rover until 1987, this was a new vehicle on the status scene. She’d drive it to school and everyone driving their beaters would throw insults like, “Spoiled rich girl!” and give her mean looks—obviously, they were jealous.

As a smitten freshman I did not share their feelings; I knew her as a friend, she was easy on the eyes, and I loved her Range Rover. While it’s true the family had money, most people didn’t realize she inherited the Range Rover because of a death in the family. One day she drove by and I stuck my thumb out—much to my surprise she picked me up. My delight grew as the reality set in very quickly that my peers envied me, sitting next to a beautiful older girl in a luxury SUV. From that point on, I decided that I had to have one (or, five) of those Range Rovers. But, of course, they were unattainable at my age. 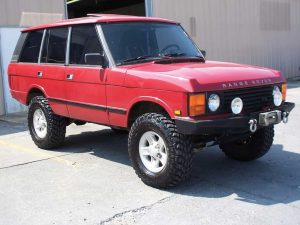 During my college years at Auburn University in the late ‘90s, I would get on the Land Rover forums; lusting over them only made me want one more. I knew I had to have one, but they were still fairly expensive… ugh, the pain! After my college years, I moved to Alpharetta in 2000. Driving through town one day I saw a 1988 Portofino Red Range Rover at a NAPA Auto garage. It was kitted-out with 2-inch lift Old Man Emu springs, BF Goodrich KM1’s and Safari Gard rock sliders. It looked rather beat up from hard off-roading. Inside, the headliner was completely gone. Outside, it had dents all over, a very loose front end and a drivetrain with high mileage.

Did I care? Nope. I just knew that I had to have this thing.

Back then you didn’t see many Range Rovers with extra off-road kit, so I had to ask about it. I figured the truck was there for repairs, so I went inside and asked the guy behind the counter—who owned the Range Rover? He told me it belonged to a guy named Matt Hubbard. I asked if he knew if Matt was interested in selling it and he said, “Actually, I think he does want to sell it, because he wants to fund his Porsche racing.” My heart started racing after hearing that. 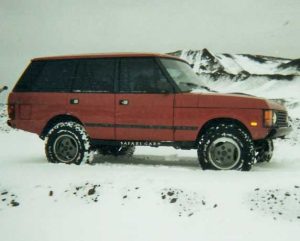 I gave him my phone number to give to Matt and it wasn’t long before he called me. We discussed the history and how it got so beat up. We both knew it was kind of a piece of junk. It had high mileage and he showed me pictures of it on its side where it had been partly rolled and stuck in mud halfway up the side of the truck. Still, I didn’t care because I wanted one so badly. I figured I could get it inexpensively, because it was so beat up. We agreed on $2,700 and I bought it.

All of my vehicles receive a girl’s name, so I named her “Jill” (because she was “jacked”). I slowly pieced that truck back together—repaired all the busted side markers and tail lights, purchased all kinds of used parts on eBay to get the interior complete, refinished the wood trim on the doors, made a few minor mechanical repairs here and there, and cleaned it up nicely. After some research, I found out that it came originally from Hennessy Land Rover, here in Georgia, which explained the lack of any rust. Once she became road-worthy, I drove Jill up and down the East Coast. I took her to Tennessee, Florida, and Pennsylvania, where it spent the winter with me and handled amazingly well in the snow. 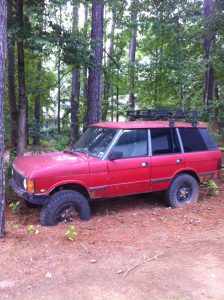 While I was staying with family in Pennsylvania, however, I began to freak out because I was young and unfamiliar with Rover quirks and vehicle repair, especially a crusty, old British one. I was concerned that it wasn’t going to last very long, so I put it up for sale in 2001. Jay Meredith, from South Carolina, who owned the now-defunct Land Rover Exchange (LRX) website, purchased it from me and had a transporter pick it up. I’m not sure how much time passed, but I started to really miss that truck. I called Jay and asked if he wanted to sell it back to me. He said that he would, but it wasn’t the same truck. Jay fixed the ticking in the engine (which turned out to be the push rods), had all of the dents removed, and had it repainted. I drove to South Carolina and coughed up the cash to get it back. The Rover looked great. 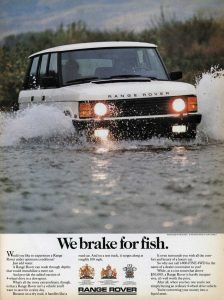 Once again, I started to freak after some time passed. I felt like the truck was going to fall apart. So, I put it back up for sale. This time, a Rover enthusiast, Tom Hyslip, from North Carolina, purchased it from me in September 2002. Tom made his own modifications like switching the original wheels, building a custom rack for the cargo area, and changing the black bumpers to chrome bumpers. I’m not sure why, but he removed the rock sliders. He also did some really cool modifications to give it more off-road prowess.

Again, it weighed on me heavily that I sold it—and I needed to get it back. I just couldn’t seem to get away from Jill. I tracked the Range Rover by keeping in touch with members on the DiscoWeb forum. Eventually, I saw that Tom put her up for sale, but Joel Mercer, who owns Buckhorn Imports, snatched it up. By the time I contacted Joel, he had put it up for sale and sold it to an enthusiast named Romaric Dautun. I told Joel how much I missed it, how I had already purchased it twice and that I wanted to get it back again. He told me to see if Romaric would give it up. I contacted Romaric, and he thought hard about it and almost sold it to me, but decided to hold onto it a little longer. 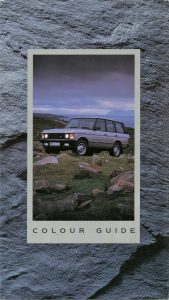 Every few months I would call or email Romaric to see if he would sell it to me. He told me that if he ever decided to sell it, that I’d have first dibs, so I left him alone thinking that he would get back with me in the near future. Two or three years passed and I emailed Romaric asking him about buying the Rover. He said that he moved to New York and left it at his parent’s house in North Carolina. His parents moved back to France; they didn’t know about the deal that deal that Romaric and I had, so they told Romaric’s brother to put it up for sale. 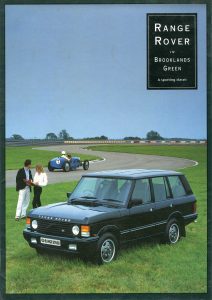 Again, I just barely missed the sale of the Rover because someone else snatched it up. That someone was Joel Mercer. In one way, I was relieved that it was still around and that it didn’t go to a salvage yard. In the other sense, I had a feeling that if Joel bought it for the second time that he was going to want to keep it forever. I immediately called Joel to see if he remembered me and he did.

The Range Rover had slid downhill. It was left under pine trees with a leaky sunroof for several years. The nice paint job had oxidized and water had damaged the front seats and created some rust on the floorboard. Although it was still in pretty rough shape, Joel had begun to remedy some of the cosmetic issues. I was happy that Jill was still alive, but I knew that it would be a tough task to get the Rover back, especially now that Joel had invested a good bit of time fixing it up. After a few emails and phone calls, I couldn’t convince him to sell me the truck. A few more anxiety-ridden emails and calls later, Joel finally agreed to sell it to me. During our last conversation, he made it very clear to me that I was absolutely the only person to whom he would sell this truck. 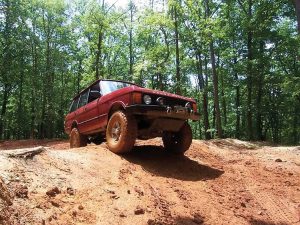