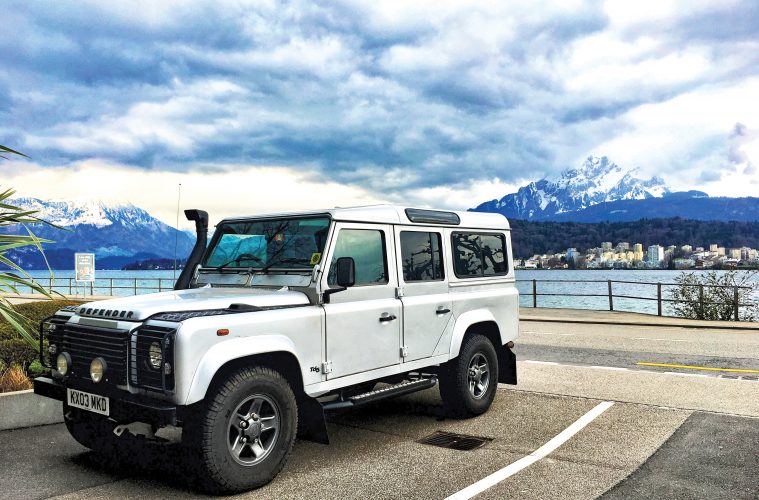 Tom Montague March turned one year old recently and has now spent 33% of his life in a Land Rover. How many adventurers can make that claim? 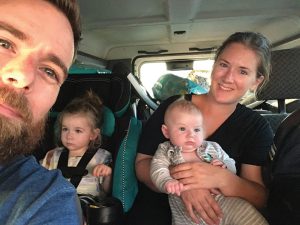 Along with his parents, Tyler and Jessica Montague March, and his three-year-old brother Henry, Tom recently returned from a four-month trek across the European continent. Two moments in the trip really stood out: their newly-purchased ’03 Defender 110 Td5 provided their transport, and in Vatican City, Tom received a papal blessing.

The Cambridge, ON couple were married in a manor house in the UK a decade earlier, so it might seem obvious that a Defender would enter their life. Tyler and Jessica attended Ontario’s biggest British car show and while Jessica generally enjoys British cars, her opinion of a Defender leaned towards meh while Tyler’s marched towards yeah.

While US enthusiasts must wait for 25 years before they can legally import a non-compliant Defender, Canadians need only wait for 15 years. Tyler took this into account when planning a European trip in conjunction with Jessica’s upcoming maternity leave. The couple has set an ambitious life goal for their family — they want to visit every country on the globe. That goal, and a favorable exchange rate had them plan for visits to the Balkan countries of Kosovo, Albania, and Macedonia. 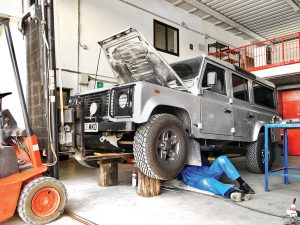 As Tyler recounted in an interview, “Once we mentioned those countries to car rental companies, their rates went through the roof. One demanded $12,000! We wanted to spend as much time as possible in Europe during our long leave, and traveling with two young boys, life would be easier if we had a large enough vehicle for all the necessary stuff. I thought, why not apply the $12,000 towards the purchase of Defender that could return with us to Canada?”

“An ex-pat British couple had set up a Land Rover shop in Ontario, and they connected me with friends in the UK. That really helped save my butt as they examined Defenders I found online and gave me ample reason to reject them. We centered on this ’03 Defender 110, as I figured it would be the perfect overland vehicle. A bonus is that it’s relatively easy for a Canadian to register a car in the UK.”

“Last April 2018, we flew over to pick up our Defender. We had asked a shop to refurbish the brakes and suspension. Henry’s friend, ‘Mr. Golden Sun,’ shone too brightly in his eyes and I had the windows tinted. The shop even left the Defender at a hotel near Heathrow and it awaited our arrival. I’d never driven a Defender — a manual one at that — nor driven a right-hand drive vehicle before.” 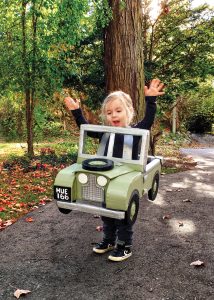 Their itinerary had them board the ferry from Dover to France, and their route took them through Belgium, Luxembourg, Switzerland, and Italy. A month in Tuscany offered intense insight into the daily life in rural Italy. “We lived in a really small village, a good fit for us. Our Defender, a noisy one from the start, had become really loud. When I crawled underneath, I found the exhaust had completely rusted out. At the local pizzeria, I asked around about a repair. No one responded until a local recognized me as the guy with the Defender. I found myself in a tractor repair shop, in which a forklift raised the front to allow for the necessary welding.”

Back in 2016, an earlier visit to Italy found Tyler, Jessica, and then-newborn Henry in Vatican City, standing with their son along the Pope’s route. When the security guards saw Henry, they offered a Papal Blessing. What are the chances it might happen again, this time to Tom? Most remarkably, it did occur again, this time for Tom.

The extraordinary network of enthusiasts dazzled Tyler throughout their travels. While driving in France, another Defender driver waves at them. “Why did he wave?” asked Jessica, “Was that like a Jeep wave?” Tyler explained, “It was NOT a Jeep wave. It’s a Land Rover wave. You’re immediately friends!” While in Italy, “I spotted a Defender with the Puma bulge hood. I’d not seen one, so I stopped. I don’t speak Italian and he didn’t speak English, but we did share and stare at our Defenders!”

In Liechtenstein, the family drove to the top of hilltop vista. Jessica wanted to walk down a path to give the older boy some exercise, and Tyler would drive the road to the base. He explained, “We thought they would exit in the same area, but we were wrong. When I realized my error, I drove back up the hill and spotted another Defender beside a house on the road. I knocked on the door and the very helpful enthusiast helped me find my way to Jessica. Was he just a helpful guy or was it a Land Rover thing? I think it was the latter.” 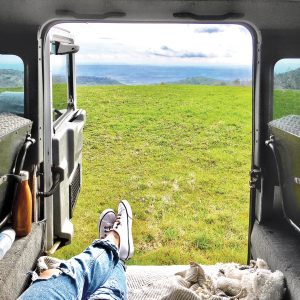 “In Bari, Italy, just as we were to board the ferry across the Adriatic to Albania, my power steering started to fail. I gave up trying to find power steering fluid in Italian. We’d connected with a British ex-pat who runs a tour service in Albania, so I called ‘Ed’ to explain our plight. He loaned us his Discovery II, provided us with the most scenic route to Kosovo and Montenegro, and oversaw the repair of the power steering in the Defender.”

For the remainder of our trip through Austria and Germany, Tyler found the connection afforded by his Defender opened doors throughout the continent. They shipped it from Hamburg to Montreal, and now, “Gertrude” the Defender now resides with them in Ontario and awaits her next adventure. Wherever they choose to go, they know that Land Rover enthusiasts will be standing buy in case of a rescue.