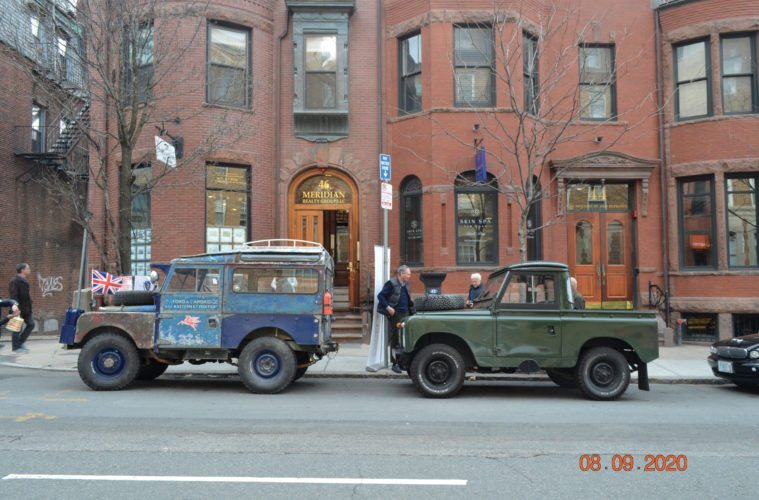 When you go will you send back

A letter from America

Take a look up the rail track

From Miami to Canada

The Proclaimers, “Letter from America”

As reported in Rovers Magazine [Winter 2020 issue], the Rover Owners of Virginia accepted the challenge of coordinating a tour of North America for “Oxford,” the Series I that has twice made the trek between London and Singapore. Obviously, plans went on hold pending decisions related to the pandemic, but Oxford did receive royal welcome in Virginia, Maine, Vermont, New Hampshire, Massachusetts and New Jersey.

On February 1, I crossed the threshold of Sarek Autowerke, Glen Allen, VA, to attend the annual general meeting of the Rover Owners of Virginia. I left the 21st century and took a step back in time.

There sat the 1955 Oxford First Overland vehicle, the very same 86” Series I that traveled from London to Singapore and back, twice! I rested my palm on the flat fender, feeling the rough layers of textured patina that told a story of several lifetimes — a story that would now continue thanks to the efforts of UK enthusiast Adam Bennett and ROAV President David Short.

Below the Oxford Rover sat a shiny new baking pan, placed carefully beneath the oil pan to catch any drips. While my Series IIA suffers from a certain amount of oil incontinence, ironically this much older vehicle left only a tiny sparkling droplet, hinting of a recent oil change.

Examining the back of the vehicle, I reached up for a moment to rub my fingers along the unique slats designed to hold the tent frame up near the roof. I could sense in my fingertips what it must have been like for the original crew to set up their tent each night in strange and different lands as they trekked across the Middle East and Asia.

David Short explained the genesis of its US tour. “The idea was to celebrate the 65th anniversary of the original First Overland, as well as the release of the new Land Rover Defender. Getting it over to the US was a challenge. First, Adam Bennett signed the Series I over to his son, Miles, so he could ‘import’ the Rover temporarily during a ‘vacation’ in America. It’s like a tourist visa. ROAV member Doug Crowther of Dividing Creek Imports donated his time to complete the importation for us. While ROAV has taken the lead, we wanted this to be a grass roots, enthusiast-led and supported year-long event.”

I sat in the driver’s seat, and gazed up through the rectangular opening in the roof from where the expedition photography and filming was done. I imagined the hot sun of the Persian desert pouring through as the vehicle rolled through endless sands. It dawned on me that this also was a good source of ventilation. I’ve got the tropical roof on Elsa, and I’d not opened the tiny oval vents since I’ve had the vehicle. I was now determined to try them out. I had to laugh that it took sitting in the Oxford to inspire me to do work on my own Land Rover. I knew I would not be the last person to touch this special vehicle and sense its energy, and I knew it was time for me to jump into my IIA and go adventuring again.

I asked David Short one final question about the Oxford. “How does it drive?”

“I have a 2015 Disco Sport which drives glass smooth, right?  I have a 1980 Series Stage One which is a bit punchy, if you will, a bit rough. And this is another level down, it’s full contact driving. There’s a lot going on in the cab, you gotta pay attention. It’s a bit noisy and a bit bumpy, but it’s fun! It’s sport. You’re not riding, you’re driving.”

Knocked Them Out in New England – Jeffrey Aronson

Not long after its US premier in Virginia, ROAV stalwarts trailered Oxford to the Maine Winter Romp. As befits it exalted status, it made its grand entrance in the conference room of the ostentatiously-named Best Western Plus Waterville Grand Hotel. It’s likely the first time a vehicle has ever been driven — deliberately — into the hotel.

Kim, Kourtney, and Khloe Kardashian vamping into the that room together would not have torn eyeballs away from the presentation of Oxford. To great applause and many toasts, David Short, Bruce Fowler and Peter Vollers presented Oxford to a fawning audience of hundreds of enthusiasts. Thoughtfully, a similar baking pan resided under the oil pan to prevent soiling the floor.

The next morning, Bruce Fowler took it out on the snow-covered trails of the Maine Winter Romp. You marveled as it seemingly walked up the slick, steep Power Line Hill, wended its way to a central clearing and then tackled trails that you might think require a torquey diesel or a Rover V-8. Nope!

With the help of Peter Vollers, who trailered Oxford to Vermont, it made an appearance at an Owners Day at the Land Rover Experience in Manchester, VT. Gene Schubert, a Land Rover Experience Instructor and Rovers North staffer, said, “I got to drive it all day! Sitting in the driver’s seat, starting it up and heading out brought me back to how they — the original team and the re-creation team, must have felt. I really admired their fortitude. The adventurers and overlanders today, driving modern Land Rovers — they have it so soft. Later in the day, I parked it next to a new Defender 110, and no one really looked at the new one!” Rovers North provided a copy of First Overland to every participant at the Owners Day.

It then headed east to Hancock, NH, the home of enthusiast Paul Odelson. As he said in an interview, “It was New Year’s Eve, and I had a couple of cocktails. I said there was no way ROAV would let me create a small event in my hometown, and a larger one in Boston. To my delight, they agreed!”

Paul works in real estate at the Boston branch of the international Engel & Volkers. Should you wish to learn polo in Germany or Majorca, E&V partners with Land Rover in running polo schools, so the link to this historic Land Rover made sense to Paul. As the impact of the pandemic grew (and before the imposition of state restrictions) Paul decreased the size and scale of the event, but not its impact. Claus De Bansa, Brookline, MA, brought his ’66 Series IIA RHD to the Back Bay event site. Ed and Shyana Harper, and their daughter, Evelyn, couldn’t contain their excitement. Shyana, who grew up in Sri Lanka, immediately contacted her brother, Nilhan Weerasinha, a Series III enthusiast, in Sri Lanka and photobombed him! Paul summed up the evening. “Here we are with the world shutting down, and a Land Rover came to the rescue.”

At the end of the evening, Bill and Patty Cooper, Blairstown, NJ, trailered Oxford to their home, only to find that public gathering restrictions ended their plans to entertain mid-Atlantic enthusiasts. As we go to press, Oxford’s tour will take a hiatus at the home of David Short, Sterling, VA. When it can go on the road again, I predict it will continue to be a smash success!

[Donate to the Oxford’s USA Tour at https://www.roav.org/oxforddonate-ed.]