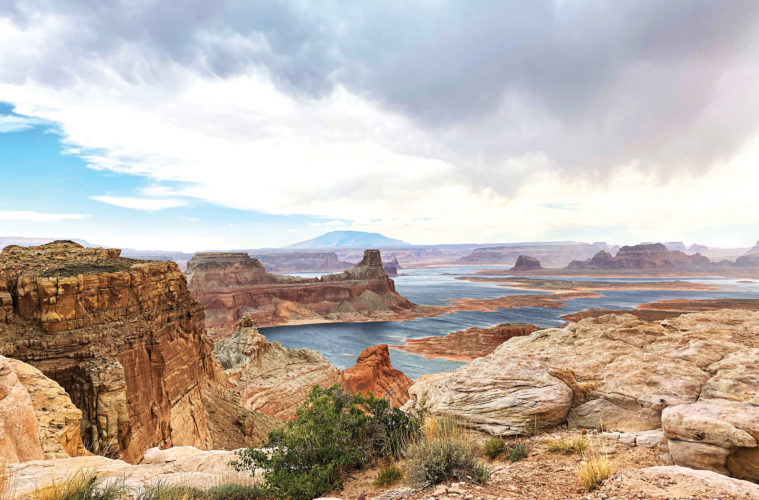 When you’ve been at home safely with two preschool-aged children for a long while, and then receive an invitation to a 9-day camping trip, you simply must say, “Yes!” Kiddos bouncing off the walls, or bouncing down a dirt road? It’s no contest.

The Arizona Land Rover Owners created an east to west traverse of Utah sticking to as many dirt roads as possible. We met up the first night in Cortez, CO, about as far south as you can go. Our group included Arizonians Andrew and Joan Pollack in their LR4, Dirk and Laurie Van Dyke, LR3, and Doug Lawyer in his 4×4 Ford Econoline camper, Casey Edwards, San Diego, CA, in a Discovery I, and me in Layla, the LR4.

As I headed to our first campsite in the Canyon of the Ancients, about 30 minutes outside Cortez, I remembered my Rebelle Rally compass and map training — but forgot the rigorous daily preparation that accompanied it. That’s why it took me an extra hour to find the campsite when I had to rely on my intuition and iPhone (with no service) to find the campsite! I was beyond elated when I came across a group of Land Rovers cheering as I pulled into our spot, nestled in a rock outcropping. This was just the beginning.

For anyone that enjoys camping (and a lot of people that don’t) something about campfires draws you in. That first night, as we all sat around watching “Channel 1,” I knew I was in for a great adventure. We had innumerable constellations above us and a roaring fire going. This is how life was meant to be lived.

The next day we packed up and hit the road by 9 am. We headed to Hite, UT, to gas up before airing down for our dirt trails. That day we passed one of my favorite monuments, Chocolate Fins, near Canyonlands National Park. Not many places in the world boast such architecture. As we zig-zagged around the fins, their thinness constantly amazed me. Mother Nature really creates the most compelling spectacles.

Our campsite that evening was at the Dirty Devil River. If you off-road, you probably understand when I say there is something just fun about a water-crossing, even a small one. This was a full-sized river, at the bottom of a canyon, with our campsite on the other side. We safely crossed one by one and then picked out flat spots to camp as the majority chose to sleep in our Rovers. Although its name would suggest otherwise, the Dirty Devil was actually a light blue and invited you in. I think all of us stuck our toes in at least.

As we sat watching “Channel 1” that night, with the full moon rising over the canyon walls, the current economic climate seemed so far away. Whose turn was it to feed the fire next seemed like a much bigger issue.

The days melted away as we zig-zagged through the lower part of the state. We attempted to cross the Henry Mountains, that so far had only been passable once out of the seven previous times’ tries. As we neared the top, the snow drifts started creeping out farther and farther into the road. It is a bit nerve- racking when your Land Rover starts sliding towards the edge of a cliff and there really isn’t anything you can do about it. The next snow drift we came across we all broke out shovels. I walked ahead to see if we were just going to find more. About half a mile up the mountain the trail became impassable. At least we also got to practice our reversing skills on the side of a mountain! Always a bright side!

On Skutumpah Road we came across a “Road Closed” sign; however it afforded us a drive through Bryce Canyon, my first since my childhood! I made a mental note to bring my kiddos back as soon as possible. One of my favorite sayings as we drove through the diverse terrain of Utah was, “If you don’t like the scenery, wait 10 minutes!” We would go from a deep canyon, to winding across the top of a mesa, and then through what seemed like a large open desert area, but this too would change as soon as you became accustomed to it.

One day we got to Alstrom Point, above Lake Powell, and the view seemed so magnificent I swear we entered another world. However, the wind was blowing so hard I could lean into it. We had planned to camp here for the night, but the thought of one group’s tent flying off the edge or trying to cook dinner seemed a bit unreasonable. So, after enjoying a beverage and the view for a good amount of time we moved farther down the road to a more sheltered location in a canyon.

On the fifth night we made camp at Dinosaur Tracks, near Hole in the Rock trail. We found ourselves joined by many visitors enjoying the same natural wonders. The dinosaur tracks themselves were up a small hike on an overlook from our campsite and hardened in rock. There was a sign as you departed on the trail there that said to “contemplate the dinosaur’s lives,” so that became the theme of the evening. “What would the dinosaur do?”

The next two days formed our grand finale. After a short time spent on the highway, we dropped into a gorgeous canyon to follow the East Fork Virgin River. Well, when I say follow, it was more like cross it 27 times on the way to a stunning campsite on a sandy beach. This night we set up some tables and chairs, as well as a few lights, and all ate together, with the sound of the river in the background. A surreal, otherworldly experience, but also as civilized, friendly and down-to-earth as you can get.

A trip of this length affords many bonding experiences between jumping cars, sharing food and discussing life around the fire. You get into a groove and everyone becomes just that much better of friends.

The next morning, we planned to leave going up the sand hill at the end of the canyon. However, I absolutely hate to admit, but the Ford Van (that had been converted to 4×4) was the only one that summited. Maybe the Rovers just wanted to play in the water another 27 times, as I know I enjoyed our alternative exit!

From there we headed south across the border a bit to Arizona, to check out White Pocket. I’ve always been obsessed with the Wave, but it’s nearly impossible to see, and basically a tourist trap now, so I was elated to learn about White Pocket. The rock formations and caves that create this naturally beautiful area are astounding to see. Even some relatively flat ground I parked my rig on to camp had zebra stripes under it.  Simply thinking about what had to take place to create this natural wonder boggled me mind.

After setting up camp at White Pocket, everyone basically dispersed to go explore, not coming back for a while. I found myself exploring a cave that you could tell had been lived in by every sort of animal, but most recently a pack rat, so there was a good amount of pottery and treasures from all over the desert.

Crossing back into Utah, we made our way over to Honeymoon Pass, our last campsite for this excursion. As we began along the trail a sign read, “…After 1877, the Arizona Mormon settlers also traveled to St. George, Utah, to conduct church business and have their marriage vows solemnized in the newly-completed St. George Temple. So many newlyweds traveled the wagon road that it came to be known as “the Honeymoon Trail”. I could only imagine traveling by covered wagon compared to our Rovers with aired-down tires!

The last evening together proved too windy for a fire, but the sunset and good company made up for it. We all watched the stars and recalled our favorite parts of the trip. None of us wanted to return to society, but we were out of popsicles and steak, and really, we could return anytime.