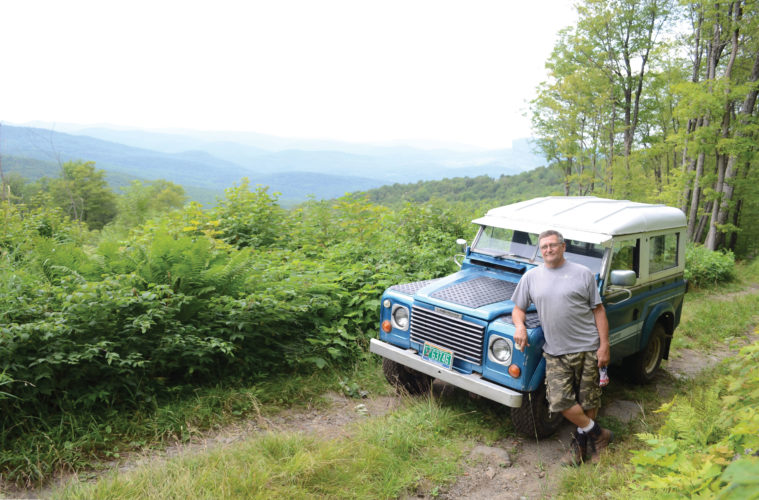 Central Vermont is blessed with some jaw-droppingly beautiful vistas. Glenn Parent especially appreciates one such view not far from his home, where the soft Green Mountain ridgelines cascade upon each other as they fade into the distance.

If you want to take in this view, you’ll need a vehicle that can handle a narrow, twisting, steeply undulating trail that snakes relentlessly upward through the densely wooded hills. Fortunately for Glenn, he has three such vehicles, each wearing the Land Rover oval.

For me, the Land Rover has always been the other product of Solihull. As the longtime owner of a 1968 Rover 2000 TC sedan and a student of Rover history, I find a special fascination in my car’s rugged, four-wheel-drive cousins. Given an up-close look, would I see a family resemblance, recognize shared marque values?

When I met Glenn at his shop, GP Rover Works, in the town of Woodstock, Vermont, he offered to take me up to the view to take some photos for this article. He decided that we should take his daily driver ‘72 Series III, a kindness to me, since, he explained, its suspension is not as kidney-dislocating as mine might be.

The trail lies within the Coolidge State Forest, not very far from Silent Cal’s childhood home and his final resting place. To me, a novice at four-wheeling, the path looked, and felt, challenging, but Glenn — and the Series III — were squarely in their element. It quickly became apparent that the difficulty in getting there was at least half of the appeal for him. And the view itself? As a lifelong New Englander who has lived in the Massachusetts’ Berkshires for the past dozen years, I thought I’d experienced all the beauty that the region has to offer — but this was something special.

Glenn’s credentials as a Land Rover specialist are substantial — his calling card is the re-creation of the Centre Steer prototype that resides in Jim Macri’s High Meadow Farms collection — and for the sake of his business, that’s a good thing. With a shop on a dead-end road,  two and a half miles from the nearest pavement, he really can’t count on drive-by traffic.

“This is the middle of nowhere,” he said. “But it doesn’t matter where I’m located, because people seem to find me.”

Glenn, his wife, Zoie, and their children moved to Woodstock a decade ago from New Hampshire, turning a summer camp into their year-round home. It was a return to the Green Mountain State for both; Zoie is from nearby Bridgewater, while Glenn grew up in Springfield, about 45 minutes to the southeast. The camp property had “this little cutout, with a really nice view, and we thought, ‘Boy, that would be a nice place to put a house,’” he said. And so, five years ago, they built their cedar log home.

Glenn’s two-bay, 28×32-foot shop sits several hundred feet from the house. On the day I visited, it held two customers’ Land Rovers, and was surrounded by a customer’s Series IIA Station Wagon, Glenn’s  Series III, his very-late ’58 Series I pickup (“the Silver Bullet”), his Triumph motorcycle and black MGB. Glenn’s vehicles earn their keep; the day I met him, he and Zoie had just returned from a camping trip in the Series I. The wrench-turning crew at GP Rover Works consists of Glenn and his son, Jacob, who has worked at his side for several years.

Glenn graduated from his local vocational-technical high school as a mechanic, but the focus has not always been on Land Rovers. He worked at dealerships and garages and ran his own service station for 15 years. Among his former employers was a Jeep store, and he still expresses respect for the rival brand.

“After I left my garage, a place in Springfield was looking for someone who could weld and fabricate. I worked there, and I thought, ‘This is not too bad.’ There was some welding and fabricating, which was right up my alley,” he said. “And I guess it progressed from there, getting more into the Rover circle, and knowing more people, and knowing more about them. After a while you get a reputation of being an okay guy to fix stuff.”

That involvement with Land Rovers led to his hiring by Jim Macri as the “Chief Technician” of High Meadow Farm, running a new, fully equipped restoration shop and turning out Land Rovers to a cost-is-no-object standard. While there, Glenn helped re-create a Centre Steer prototype, unique worldwide, and amassed an exhaustive knowledge of Series I Land Rovers.

“Not a lot of people know how to work on those,” he said. “I learned a lot by doing the research for Mr. Macri.”

Since becoming a Land Rover specialist 30 years ago, Glenn has worked on Land Rovers and Range Rovers of all sorts, but his sweet spot is any Series I-II-III variant. “I’ve worked on older Range Rovers and Discos and Defenders. But these little things seem to follow me around,” he said.

“The vehicles are kind of clunky and they don’t handle very well, and how the British put stuff together is just crazy. But once you know it and you’re into it, it’s like, ‘What else am I gonna do?’”

Throughout its history, the Rover Car Company focused on engineering. My own ’68 Rover 2000 TC, with its inboard rear disc brakes, twin brake servos, de Dion rear suspension, horizontally-sprung front suspension and other bits of derring-do, the Solihull engineers performed when they weren’t dreaming of gas turbines. And still, the 4×4 radiates many of the qualities I find so endearing in my Rover: the rugged construction, the liberal use of alloy, and the durable but unpretentious materials used in the cabin. Neither vehicle lets you forget that it’s a machine designed to do the job of getting you to your destination and safe home again.

Somewhat typical of the Land Rovers that make their way to Glenn’s shop is the red 109” Station Wagon in the shop’s side yard. To the untrained eye, it looks to be in very tidy condition. But under Glenn’s expert appraisal, the needs pile up quickly — led by a bulkhead that’s been rusted and badly patched. That will be replaced, a highly involved job. How did the owner find Glenn? The seller recommended him.

He does restorations and repairs, but like a number of mechanics, he draws the line at bodywork. “I’ve painted before, I could do a paint job, but the way it is nowadays you might as well go to a regular body shop that has a dust-free booth,” he said. “If I do a $40,000 restoration and then I do a $500 paint job.”

On the other hand, fresh paintwork isn’t always desired. “The thing is now, people like the patina,” he said. “Restore everything underneath, make it mint mechanically, but have it look like it’s been used. That seems to be the way to go now.”

Glenn has seen growing interest in Land Rovers over the past six or so years. In some cases, those who have always wanted one have decided that it’s now or never; for some buyers who’ve left the cities for country life, a Land Rover is seen as a cool alternative to everyday transportation.

Glenn will offer his expertise to those in the hunt for a Land Rover; for that, there’s usually no charge. He cautions prospective buyers that a cosmetically good Land Rover might be resting on a rusted-out frame, making it a hugely more expensive proposition. As with nearly all other classic vehicles, the Land Rover’s arch enemy is rust.

“If it needs a frame, the value is probably a third of what the seller wants,” he said. On the other hand, good deals do come up from time to time. “If it’s good, you can’t pussyfoot around. You’ve got to pull the trigger right away,” he said. “Once they get online, somebody scarfs them up.”

Despite having no advertising campaign – “I have T-shirts,” Glenn said —“There’s a two-year waiting list. I’ve got so many vehicles backed up, if I don’t stop taking them in, the work is never going to be done,” he said. “I’m busier than ever.”

“I didn’t figure I’d have quite a yard full all the time. But people seem to be fairly patient with me, and when they get done, I think they get a nice job, not to blow my own horn,” he said. “After every one I do I say, this is going to be the last one, but… eh. It’s not bad. And bringing my son in with me has been pretty good.”

His profession has never once left him without a paycheck; his focus on Land Rovers keeps him as busy as he wants to be, and he has both the means to travel the trails, and reasons to do so. Who could want for more?