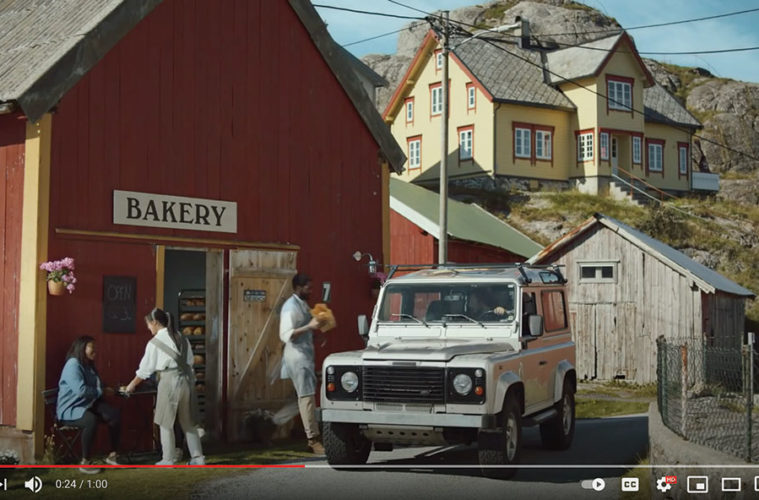 These are the times that try one’s soul – winter is upon us here in New England. While we’re shoveling snow and scraping ice, we know of readers who are still applying sunblock. Whatever! We still thank you for the many submissions for this issue.

As always, it’s useful for novice Sighters and veterans alike to review the rules of the contest:

Rule #1 – All Sightings receive recognition and our appreciation, but not necessarily a mug. We reward only those Sightings that capture the unique qualities of Land Rovers as well as their owners, and display them in a distinctive way.

Rule #2 – If your Sighting does not surprise and delight you, we’ll likely feel the same – thus, we can’t award you a mug. We expect to see Land Rovers in British television programs, British publications, films made in the UK or with African Safari themes. These Sightings are appreciated but not mug-eligible.

Rule #3 – At an ever-changing date, we close off Sightings. For this issue, the date was January 31, 2021. If we’ve mentioned the Sighting in an earlier issue, we might not have the space to mention it again. If you’re new to the community of Land Rover enthusiasts, you may not have seen your Sighting in a previous issue.

Rule #4 – We can’t outfit your kitchen. If you qualify, one mug per issue.

Rule #5 – Sightings of Land Rover references in books go to our Literary Land Rover Editor for mention but only when space permits.

Rule #6 – Psst… email submissions – remember we can’t send a Coveted Mug by email. If you want consideration for a mug, send us your full name and shipping address.

Rule #7 – Grudgingly, very grudgingly, the Editor admits that he might have made an error. Let us know if you think you’ve been jobbed, but all decision of the Editor are final.

When the Wall Street Journal wanted you to read about urbanites fleeing to challenging situations in the countryside, their lead photo was a hedge-fund looking sort standing in front of a Defender 90 soft top, noted Brent Lane, Saco, ME.

Social media outlets thrive when Land Rovers are present in their feeds. Rick Prudhomme, Hendersonville, NC, spotted a Drive Coffee can with a Defender 90 on the front and a Travelpro post with a couple lounging in a forest atop a Land Rover. Melanie Ruggieri, Southport, CT, spotted a very handsome [with Maine license plate!] 88” pickup on the Serena & Lily Instagram feed. P. T. Schram, Churubusco, IN, spotted the roofline of an LR3 or LR4 in a ProFootballTalk.com feature on Antonio Brown joining Tom Brady and the Tampa Bay Buccaneers. The British company Fat Face included a patina Land Rover in their Fall email marketing, says Kraig Mackett, Perrysburg, OH. Chris Liles, Richmond, VA, was surprised to see a RHD Series Land Rover in an online promotion for Bookings.com, when the “deals” were all in the USA. Roy Adams, St. George, UT, spotted a couple leaning against the front end of a Defender in a Costco online ad for drones.

Movie producers and directors love to include Land Rovers to attract audiences. Tim Drennan, Loxahatchee, FL, noted a Defender 110 on the highway in the American movie “Vice.” As he told us, “my Rover senses were at optimal performance to see, if for only a moment!” Kip Hunsinger [see Rule # 6] spotted Nicolas Cage on the set in Dubrovnik, Croatia, with a Land Rover Defender 90 being used in the film “The Unbearable Weight of Massive Talent.” Bo Prillaman, Richmond, VA, spotted a Land Rover in the trailer for “Pennyworth.” Dixon Kenner, Ottawa, ON, enjoyed seeing a RHD Series pickup in promotions for Peter Rabbit 2. Elizabeth Prillaman, Richmond, VA, saw a Series 109” in the Christmas movie “Holly Star.” The 2009 film “Christmas on the Bayou” resurfaced and Steve Lister, Utica, OH, caught the leading man using a Series IIA as his daily driver. Bo Prillaman, Richmond, VA, spotted a trio of Defenders on an archaeological dig in “Redemption Day.” Mark Hollahan, Jacksonville, NC, reported that the couple fleeing aliens in “Save Yourselves” did so in a Series III; clearly speed was not of the essence.

Chris FitzMorris, Gotham, NH, enjoyed seeing a Land Rover 110 pickup like his in front of the British products store Craghoppers. Karen Sindar, Santa Rosa, CA, caught the Land Rover used by the nearby Prohibition Spirits distillery. Kraig Mackett, Perrysburg, OH, spotted an additional Land Rover used as a prop at Disney’s Animal Kingdom in Florida. He believes that “even Disney and Mickey Mouse are not immune to the need for more than one Land Rover!” Robert Hall, Anchorage, AK, spotted a Defender 110 holding up a surfboard shop sign in Honokaa, HI.