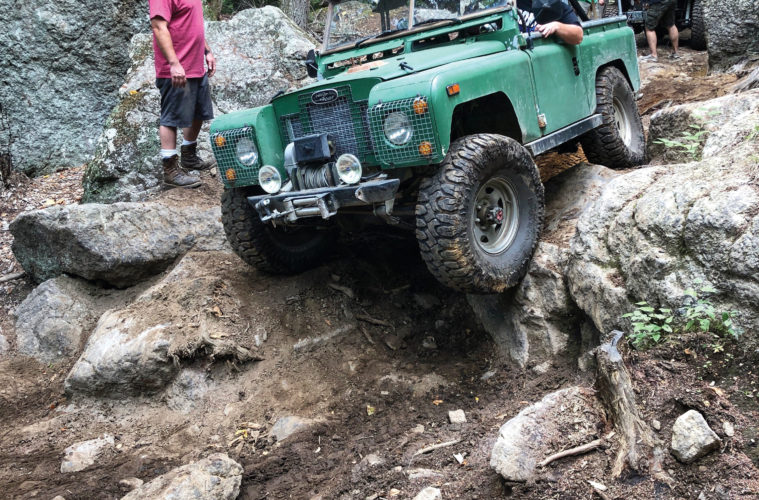 Until last year, my experience with catastrophic events was that they were confined in time and place, but in the case of Covid-19, this catastrophe has affected the entire world. For the Land Rover enthusiast, the pandemic has forced the cancellation of most large, tightly organized Land Rover gatherings and events.

I had no idea that my article on the Maine Winter Romp, in February 2020 [see Spring 2020 issue -ed.] would chronicle the last major event without social distancing or restrictions. Back then, the virus’ impact seemed in its infancy and no one could agree on the next steps. One by one, major events across the nation were postponed, held under significant social restrictions or cancelled outright.

Nevertheless, for me personally, this year has been one of the most active for motoring in smaller groups and gatherings – while maintaining a safe environment. What better way to socially distance than being inside your Land Rover whilst looking over the bonnet at a steep, ascending trail.

In Vermont, we are lucky to have so many public trails and Class 4 roads [unmaintained but open to the public – ed.] at our disposal, so it’s a little easier to find a challenging place to off-road than for someone living in an urban or heavily-populated area. With a half dozen series Land Rover owners in my town of Brattleboro and several others within an hour’s drive, it’s fairly easy to organize a woods run with just a few days’ notice. Since the pandemic started, we have managed to get out eight or nine times with groups of eight or more Land Rovers – and even more runs with smaller groupings. We generally stick to Southern Vermont, as drive range is fairly limited with a group of stock 2.25L motors, especially when trying to make it back before sundown after a day in the woods.

The usual spots include roads in the Woodstock/Plymouth/Bridgewater area, in and around Manchester/Dorset and Class 4 roads and trails in between. As a loose, not-so-organized group, we call ourselves the Vermont Rover Club. Most events run just one day, but we have done several multi-day events.

Noel Bishop of Fletcher, VT, usually makes the trek south to join us on trails and he finally managed to get us all to commit to make the trek to his area this fall. That weekend would have been the 30th anniversary of the annual – but cancelled – British Invasion event in Stowe (over the mountain from Fletcher). A few of us club members attend that event each year, so we expanded the gang and kept the date.

It was an absolute treat to drive on trails and old roads that we had never travelled before. Noel’s buddy and recent series owner, Graeme Walford, has a cabin on a lake, which we used as a base to gather and eat prepared and grilled food outside. At times throughout the weekend, we were so close to the Canadian border that our cell phones warned us of the switch to international calling plans.

On another outing to Manchester, VT, in the opposite end of the state, we planned to rendezvous at the Orvis parking lot. We awaited the arrival of two more Land Rovers when I received a call from the Manager of the nearby Land Rover Experience Center. He asked if we were in town because someone had seen a bunch of series Land Rovers driving down the road, and he invited us to come by. We set aside our plans to travel to the hills of East Dorset for a visit to the old Freedleyville Marble Quarry, and quickly detoured to the Experience course where we could tackle their trails as a group. Those offers don’t come every day but the stars aligned for us. That day culminated with a visit to the quarry, followed by a 7-mile Class 4 road drive which featured several challenging sections and beautiful scenery, high on Dorset Mountain.

On one of our Fall runs in Woodstock, we had some newcomers to the group and it proved to be a great day with the season change in full effect. On the lower roads we experienced dry dirt roads, but once we started climbing the ridgeline into higher elevations, we discovered a beautiful, 4-inch white blanket of snow covering the trees and trails. As the day progressed, the snow melt created rivulets of water and the odd mud rut. Every trail ride created its own special place in a year of cancelled events.

The camaraderie and mingling at large events can be the best experience of being a Land Rover enthusiast. In those settings, the community grows with the stories, parts swaps, the meeting of new people, the sharing of common good/bad experiences on the trails, not to mention the admiration of each vehicle. With all of that on indefinite hold — and in lieu of sitting at home — these smaller get-togethers have helped us keep the spirit alive.

Since the pandemic started, I have been talking to people all over the globe, and many plans have been hatched to visit other places to experience travel in a Land Rover. I know that not all of them can happen but I’m definitely going to try.