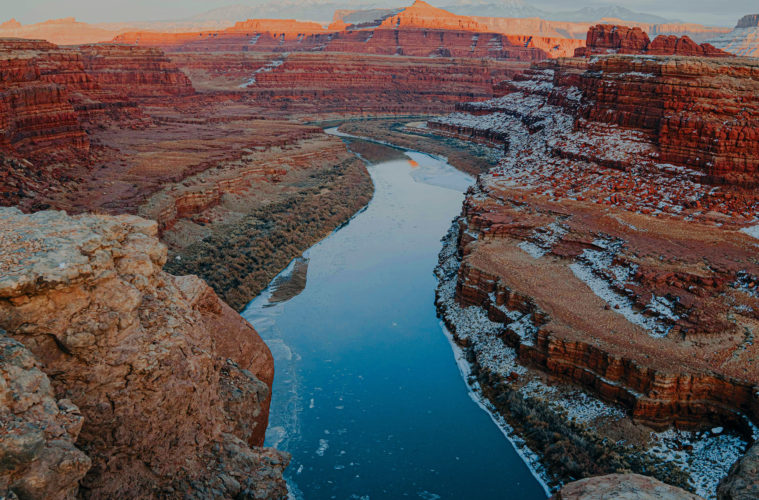 The Covid-19 pandemic has elicited an outpouring of volunteer efforts, as demonstrated by a group of Land Rover enthusiasts in the West. On January 6, Thayer Low, Westminster, CO, loaded up her “Layla,” her ’12 LR4, with donated sleeping bags, tents, water purification devices, lamps, axes, shoes, face masks, coats, socks and other basic items. 665 miles later, she delivered them to Flagstaff, AZ, for distribution to the hard-hit Navajo Nation.

Thayer, a Rovers Magazine correspondent, responded to an online appeal from Ian Lyman, Beaverton, OR. A tech entrepreneur, Ian had left college in the ‘90s and moved from San Francisco to Montana. There, he sold his software company and started up a film equipment rental business to supply the film and television productions in the state. When Caitlin, his wife, took a position as an animator, they sold the business and moved to the Portland area.

In 2005, Ian became a Land Rover owner/enthusiast when he purchased an ’86 Land Rover 110 3-door with a 200Tdi. Through the skills of Doug Shipman of Ship’s Mechanical Services in Portland, it’s since had an engine swap and conversion to a 5-door station wagon. Ian reflected, “It’s been a life-changing thing for me, opening up so many opportunities.”

“I like to start tech companies,” Ian said, “and I’ve been mentoring companies and individuals for a long time.” When the pandemic hit last March, Ian and his partners, Shashi Jain, an innovation manager at Intel, and Connor Weller, a Washington State University student, created MakerForce. The organization began manufacturing face shields (using Connor’s 3-D printer to create the prototype) for Portland-area health providers. By October, the immediate needs had been met and MakerForce sought to provide assistance to other hard-hit regions.

That’s where Olivia Mathison, Puyallup, WA, played a critical role. “I consider myself an urban native,” Olivia said, “but I grew up on the reservation of Tuba City, AZ. When the pandemic struck, I thought of everyone back home. The Navajo Nation is enormous, 27,000 square miles covering three states – about the size of West Virginia. Yet we have only 13 grocery stores, so many residents live in a food desert. So many individuals live without electricity, running water – and in the middle of a full lockdown, without transportation. I feared for our elders.”

Olivia is a member of the American Indian Science and Engineering Society (AISES), Puget Sound Professional Chapter, and with the help of MakerForce’s Shashi Jain, she arranged for a first delivery last June of 2,100 face shields to health care providers, law enforcement and Chinle High School, the nation’s largest. In addition to her full-time job as an Associate Engineer for the City of Tacoma, “I was receiving a fast-paced introduction to fund-raising and grant writing,” Olivia said ruefully, “more accidental than planned!”

Winter driving in the Navajo Nation requires skills and the right vehicles (“I have only a Ford Fiesta,” said Olivia) to combat the challenging terrain and seasonal storms. That’s very appealing to Land Rover enthusiasts such as Josh Ashcroft, Portland, OR.

Josh and his business partner, Ramin Rezvani, had left their profession of architecture in 2015 to start Nomadica, an adventure apparel, backpacking and camping equipment company. “We had plans to overland around the globe, but with our full-time jobs and the beauty of Oregon, we decided to stay put and create Nomadica. My ’06 LR3, and before it, a Range Rover Classic, took me to so many amazing places.”

“When Ian’s MakerForce put out the call, I knew that Nomadica could donate face masks and that I could make the time to help with delivery,” said Josh. “We’re connected through the Pacific Coast Land Rover Club.” MakerForce spread the word through social media and their EquiptheElders.org website for supplies to assist the Navajo Nation. Ian noted, “It was important to us to work through a native-run and native populated organization. I’m very grateful for the connection with the AISES and Klee Barally’s Taala Hooghan organization in Flagstaff. With the nation in lockdown, Flagstaff was as far as we could deliver, and Klee would provide us with distribution within the reservation.”

Within a few weeks, drop-off or shipping centers were created in Denver, coordinated by Thayer Low, and in Salt Lake City and Portland, under Josh Ashcroft. By January, over 3,500 lbs of supplies were packed into two Discoverys. Josh took off from Portland (“The load was too big for my ’86 Land Rover 110 Station Wagon, so I had to take my LR3”). Josh noted, and Klee Barally in Flagstaff concurred, that the quality of the donated gear was high. “People gave us brand-new or barely-used camping equipment and top-flight PPE,” Josh said.

To Thayer, the volunteer project made eminent sense. “A lot of us in the off-road community have this connection with the Navajo Nation’s land. We drive through their land often, and this was a small way to thank them. I think we should do all we can.”

Duane Beyal, Editor of the Navajo Times, said that “The Navajo Nation has been hit especially hard by the pandemic. With a positivity rate in late January of 9.5 %, far above WHO standards, and lockdowns to reduce the spread, our remote population is suffering. We’re grateful for the private assistance to our nation.”

Klee Benally, Flagstaff (Kinlani), AZ, provided the critical distribution connection for Equip the Elders. With the nation’s borders closed off, Klee’s networks of indigenous groups proved essential. He said, “We were floored by the quality and the amount of donations; they were all so appropriate to the needs of our most vulnerable. Right now, we have two feet of snow on the ground here in northern Arizona. The challenges of the pandemic, the pre-existing housing conditions – together, they create major problems.”

One donation remained foremost in his memory. “When the fleet of Land Rovers arrived and we emptied them out, one item was a space heater. My heart leapt when I saw it. Only two days before, a household with no running water had contacted me. They had just run out of firewood and were desperate for a heater. We delivered it to them right away.”

I called Thayer Low to share Klee’s story. “That was in my LR4,” she exclaimed. “It was an extra one at my home. I had no idea if anyone could use it!”

[Equip the Elders is planning more donations and deliveries this year. For more information, visit www.EquiptheElders.org and www.KinlaniMutualAid.org . The Pacific Northwest chapters of AISES have created a GoFundMe page under “Pacific NW Donations to Navajo Elders” – ed.]