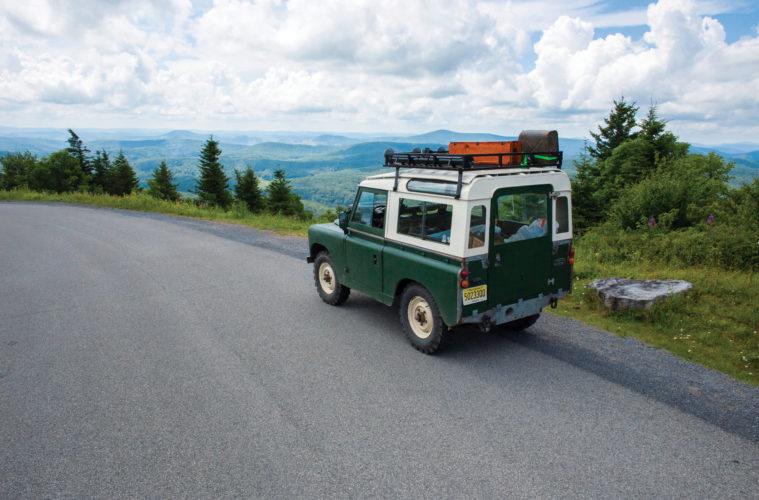 Voices over a CB with a Land Rover convoy heading from New Jersey to West Virginia:

“I didn’t realize West Virginia was so mountainous, it’s beautiful, but pretty hard on my little engine!” I said to Josh Loveland as my engine screamed in 2nd gear climbing the 8% grade of yet another mountain.

“Yeah, there’s a reason the state’s nickname is “The Mountain State,” responded Josh.

“Err, I wish I had known that before I came on this trip!” I radioed to the group, eliciting much laughter at my expense.

Five years ago, I found my ’59 Series II when my wife, Nadine, and I decided to build a new house in Flemington, NJ. The primary heating would be a high-efficiency wood-burning stove. Knowing that even the most efficient wood-burning stove is useless without a vast amount of wood, I began searching for a cheap, old vehicle I could use to haul wood.

As a “car guy” of classics – I’m nine years into the restoration of a ’75 BWM 2002 – this seemed like a great opportunity (i.e., excuse) to add another fun, interesting vehicle to our family fleet. I began searching Craigslist and came across someone locally selling a derelict Land Rover Series IIA. I had always admired Defenders, but knew I could not afford one. But this quirky little IIA had nearly all the charm and appeal of a Defender for a fraction of the cost. I went to see it and fell in love! Although this one would require repairs far beyond my capabilities and budget, I was hooked.

My search continued for a Series II or III within my budget ($5,000 or less) – that had a solid frame and needed minimal repairs, reliable enough to drive around town with a load of firewood. Given my small budget, I found few that did not require major mechanical or structural work. Mercifully, after three months of constant vigilance, the perfect Land Rover fell into my lap. While admiring a friend’s restored ‘50s Ford F100, my friend told me of an acquaintance that had an old Land Rover sitting for years in his backyard. Immediately, I reached out to the owner and learned of his ‘59 Series II. I went to investigate and confirmed that, although it wasn’t running, it looked complete. I hand cranked the engine to make sure it wasn’t seized, inspected the frame and happily discovered little rust. Realizing I had just stumbled upon my “Sealacamp,” I quickly negotiated a sale price of $3,500 and had the truck towed to my home.

Over the next three years, we moved into our house as the Land Rover inched closer and closer to completion. I certainly had my ups and downs, including seizing up the engine on the very first test drive thanks to a clogged banjo bolt on the back of the block! I sourced a replacement engine from a Series III and began the “while you are in there” process of a new wiring harness, suspension, brakes, ignition system, water pump and exhaust. I even went so far as to search out a tropical top for it and paint the entire vehicle! As is often the case, I need to credit a skilled mechanic and off-road enthusiast, Dan Degadillo, Flemington, NJ, for his expertise and commitment to the Series II.

I also dove in head-first into the history and heritage of the Land Rover brand. I read First Overland, spent countless hours watching every Camel Trophy video and wound up as Art Director for Alloy + Grit.

These experiences turned my vision for a cheap little wood hauler into an epic, globe-conquering expedition vehicle.

With the Land Rover refurbished, I explored trails and dirt roads in New Jersey. Under Josh Loveland’s leadership, we planned a Land Rover adventure in West Virginia. Then the COVID-19 pandemic hit; with our home state in lockdown, we feared the cancellation of our plans. Thankfully, off-roading is a naturally social-distancing activity; as the state regulations slowly eased over the spring and early summer months, we began planning anew.

The lockdown gave me time to fabricate a custom roof rack and install additional lighting. I built a wooden box to hold dirty recovery gear and spent many nights checking the tightness of every nut and bolt. I also put together a spare parts kit of fuses, hoses, fan belt, fuel pump and ignition bits.

With all of the work done, my first long-distance trip in the Series II began early on a Wednesday morning in July. The first four hours were smooth sailing, and I thoroughly enjoyed driving along the back roads of NJ and PA as I slowly wound my way toward West Virginia. Then, just as I crossed into Maryland, I hit a terrible rainstorm. As the storm worsened, the rain squeezed through the seam below the windshield, showering me and everything in the cabin. At first it provided a welcome relief from the heat of the day; it felt like I was in an episode of Top Gear where the hosts drive cheap cars for long distances. Then my mood sank as I realized the gauges and other electrical components should not get that wet. I grabbed a rag and spent the next 45 minutes with one hand on the wheel and the other drying off the gauge cluster and everything around it. Eventually the rain gave way, and shortly after crossing into West Virginia, I basked in the amazing views of the rolling Appalachian Mountains. I was chuffed my Land Rover had made it so far and brought me to such beautiful vistas. In my mind I felt like I could have been on the Far Eastern Expedition or some other classic Land Rover trip.

After nine hours of driving, we had stopped just outside of Bear Rocks Preserve in West Virginia. We decided to take a sunset drive to the top of the nearby mountain. I turned the key, the starter cranked and cranked, but the engine just wouldn’t start. My stomach dropped – one of my biggest fears was coming true. I was now nine hours from home, stranded with no cell service. I did my best to remain optimistic and agreed with my friends that “Babar,” (the slow elephant from children’s books) might just need to take a nap. When, having cooled down, it started an hour later, I realized the problem was fuel starvation caused by vapor lock. Leaving the hood up to help speed up the cooling down made the difference.

On Day 2, we explored Canaan Loop Road, which features five miles of unmaintained roads and a stream crossing. Babar bounced along like a mountain goat in low range. it was so much fun driving through deeply rutted trails and then climbing up and down some rocky sections. Without modern amenities like traction control or locking diffs, driving on rough trails is all about driver control and picking the right line. It was a blast to maneuver my way down the trail. Our day ended with a serene campsite next to a river, a quick dip followed by a great meal over the campfire.

The following day included more dirt roads, a hike to even more amazing views at the top of Seneca Rocks and a drive to the top of Spruce Knob, the state’s tallest mountain. Our last night was spent at a secluded spot on top of a mountain with a 180° view. It was, by far, the most beautiful campsite I’ve ever stayed at in my life.

After more dirt roads and a great BBQ lunch in Elkins, WV, I began my drive home on Saturday afternoon, again instructing my GPS to chart a course avoiding major highways and sticking to the B-roads. Just outside of Harrisburg, PA, my hoped-for final fuel stop, my transmission made an awful “ca-chunk” sound going into second gear, and again going into third gear. With nowhere to pull off, I tested 4th and it went smoothly and remained in gear. My gut told me to stick to the main roads and I spent the next two hours and 110 miles with white knuckles, driving without shifting out of fourth gear until I got off the highway just five miles from my home. Thankfully, Babar and I made it home, safe and sound. (I’ve no idea what the problem might have been – it has not happened since then.)

West Virginia abounds with breathtaking views around every curve. I would highly recommend spending time to explore its mountains, rivers and hiking trails. I’m so thrilled and proud that I was able to do this trip in my Series II, but I’d love to bring Nadine and our kids along with me. I’d feel much better in a more comfortable, safer vehicle, one with more than drum brakes and zero airbags. I’m thinking a 2020 Pangea Green Defender 110 would be perfect for future adventures with my family and friends.