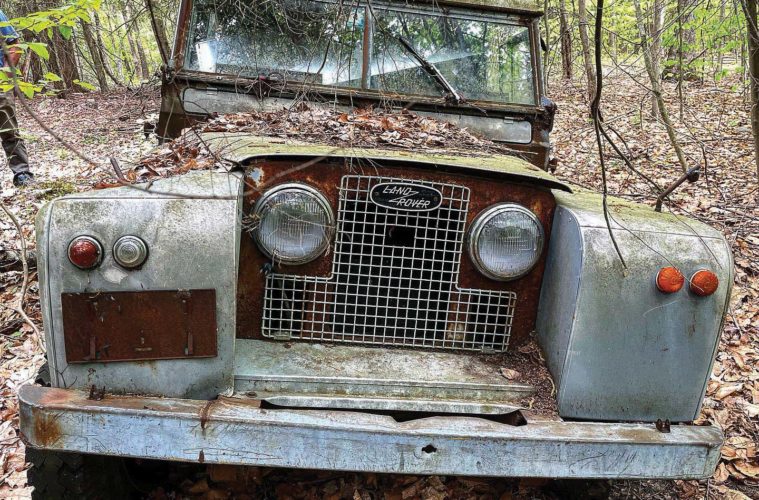 All of the big Land Rover events are back – but so are all the weddings, family affairs, home repairs, and general obligations. That said, it’s been a full summer of ‘Rovering’ since my trip to the Martha’s Vineyard Series Rover Event, [See Summer/Fall 2021 issue -ed.] with many things happening right here in my own backyard. Here are a few highlights.

Tracking down derelict Land Rovers – often abandoned in the woods – has become one of my favorite things. With the landowner’s permission and the offering of a nominal fee, they’re usually pretty keen to get that “heap of junk” off of their property. One day, while talking to a buddy in a neighboring town, he asked if I had ever seen that old Series truck up the road in the woods. My ears perked up. “No, which Series truck?” I asked. We drove up the road and met his neighbor, who had purchased the Rover in the ‘60s as a high school student. There it was, a ‘63 Series IIA 88”. It was 100 feet into the woods, sideways on an embankment, with the whole driver’s side on the downside of the slope, buried up to its door sills in forest debris. I asked how it got there and he barked, “I drove it there, how else?” So at least we determined that it “ran when parked.”

He was excited at the prospect of having it gone, especially since it had sat there in the same spot since 1985, due to an already rotting frame. I was excited because of the parts to be picked from it. With the pull of a Massey Ferguson tractor and the push of a CAT bulldozer, we managed to guide it up the hill and onto a trailer, with a few directional tugs from the winch on my Series III. Now she sits in the parking lot outside my shop, waiting to be brought inside and dismantled, bolt by bolt, but that can wait until winter.

I sold a parts 109” to Matt Hawkes, Saco, ME, and when he told his fellow Maine enthusiasts he was going to travel to pick it up, suddenly, a group of Rover elves accompanied him. What started as a tow job turned into an excellent “Rover Day BBQ” at my shop in Brattleboro, VT. I needed some welding done on a Salisbury axle. Mike Capozza, Portland, ME, agreed to bring his welding unit and come along with Matt. Word spread and a full crew rallied with eleven Rovers turning up on a sunny Saturday afternoon. My buddy Zach Corbin, a chef who owns a late IIA 88,” manned two grills and fed us all with gourmet meals from his Peter Havens’ restaurant in Brattleboro. While Zach prepped and cooked, John Vallerand, Greene, ME, fixed the plethora of electrical issues on Zach’s truck. John Dakawicz of Hillside Garage in Washington, NH, dove into the axle repair job and cut pieces out of an old frame to make new steel bump stops for the Salisbury. Capozza welded the stops into place and trued the shock mount holes. It was like an army of ants being let loose on a bag of candy. There was much food, and many beverages and laughs that day, not to mention all the invaluable work that was done in the name of fun.

At the end of August, I flew to St. John’s, Newfoundland, after a two-year hiatus from visiting the motherland. The island is rich in Land Rover history, but for a place that was once one of the world’s largest importers of Land Rovers Series vehicles, there aren’t many left on the roads. I took a run down the southern shore to visit my buddy Calvin and poked around in his field of old Series derelicts. I envisioned a few of them in all of their patina glory, rebuilt on new frames, but it seems unlikely, given the remote nature of where they lay.

The 30th anniversary of the British Invasion happened in Stowe, VT, in mid-September. It was actually the 31st year, but last year was skipped due to the pandemic, so 2021 was the big “XXX” event [See p. __ – ed.] The Land Rover section was noticeably smaller than in previous years, but it didn’t matter in the slightest. Most of us were there to see each other and the Land Rovers with all the rest of the event being a bonus. The Land Rovers are always relegated off to the side of the field, while the main lawn is filled with rows and rows of Jaguars, MGs, Triumphs, Bentleys, etc., all vying for the coveted Best in Class awards. The Land Rover section seems to be more about the social interaction and camaraderie than the competition itself, evident behind the Series section with all the coolers, camp chairs, and tents. Most of the conversations included, “Would you like a beverage?”

The final Land Rover event of the season for me was Metal Dash Weekend in Petersham, Massachusetts, hosted by 87-year-old Don Flye and his son, Mike. Like most major automobile events, it was cancelled last year but bounced back this year with approximately 65 Land Rovers in attendance over the three days. It was great to see friends from all over make it out for this laidback gathering. All the usual activities returned; the convoy through the Harvard University Forest to Red Apple Farm, the bonfires, tailgate grilling, parts swap, trials course, etc. Metal Dash is always one of my favorites.

Apart from the larger events and gatherings there were also quite a few day rides on woods roads and dirt trails to remind me of why I love these aluminum boxes so much. Now off to another derelict Series truck I heard about it the woods by the old quarry….