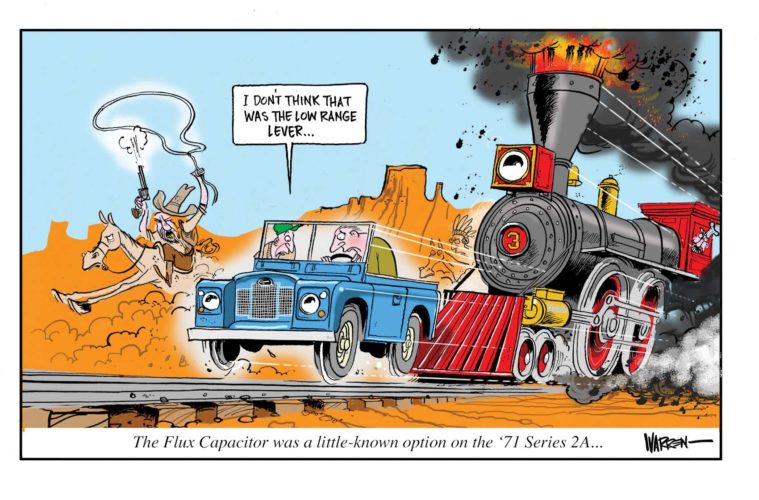 Behind the Steering Wheel – Holiday 2021

The surprise phone call came in late August. Would Maine’s Downeast Land Rover Club accept an offer from Bill Burke of Camel Trophy and 4-Wheeling America fame to make a Camel Trophy presentation in September? Saying no would be like refusing an offer from the Archbishop of Canterbury to speak at your church’s Sunday service.

It turned out that Bill has friends in high places, specifically in the coastal town of Lincolnville, ME. What Bill did not know was that the impetus to create a Downeast Land Rover Club had grown out of the efforts of an enthusiast in Lincolnville in the early 1990s. The town featured a pub willing to host Land Rovers, a campground willing to open sites and trails to Land Rovers, and, nearby, the Owls Head Transportation Museum, an auto and aviation museum that features weekend events such as military vehicle and foreign car shows. At different times, Rovers North and East Coast Rover have both lent a hand in supporting and organizing these weekend events. The sale of the campground ended the event off-roading, but the club grew and continues to thrive as a group to this day.

Terry Jackson, Lewiston, ME, connected with Museum Director Toby Stinson and determined that their “Foreign Car Day” would coincide with Bill’s visit to Maine and that the Museum would be happy to provide space for a presentation. That September afternoon, 40 enthusiasts gathered to listen to Bill’s experiences with Web Arnold in the 1991 Tanzania-Burundi Camel Trophy adventure. They were joined by photojournalist Lou Sapienza, Rockport, ME, who rode with the ’96 US Team in Borneo (with drivers Ken Cameron and Fred Hoess).

Thousands of off-road enthusiasts applied for the ’91 team – after winnowing down the applicants, Bill found himself competing in cognitive, athletic, team-building, driving, and off-road recovery tests over a long weekend of 24-hour days. His mechanical test called upon him to install a camshaft. The team-building exercise involved figuring out how to move a fully-locked Defender 110 at 1:30 am. Competitors had to demonstrate safety and knowledge of chainsawing and bridge building, and have the physical stamina to complete 6-minute mile runs in boots and backpacks.

The 1991 competition saw the first use of the then-new Discovery I 5-door [which would not come into the US until 1994 -ed.]. Once selected, Bill and Web flew to France for international training, and then to Dar es Salaam, Tanzania, for the start of the event. Each Land Rover subsidiary purchased a Discovery for their national team; all were prepared for extreme duty by Land Rover’s Special Operations. Eighteen countries competed for the ’91 trophy, along with 10 support vehicles for first aid, communications, technical support, an event coordinator, and a lead scout. Each person could take only what they could carry in two Pelican cases; each team had two competitors and carried two journalists.

Over 300,000 spectators cheered the competitors on at the start of the race in Dar es Salaam. Knowing that relations with the many villages they would travel through would be important, most of the vehicles carried toys for children and useful items to donate during their passage. Every vehicle also carried parts that could be shared by any team; Bill remembered needing two gearboxes, three clutch swaps and a center differential. “We beat the snot out of those Discoverys. All we needed was a winch and a strong tree to complete the repairs,” Bill said.

The British, French, Italian, and US teams had the best navigation skills, so Bill and Web often found themselves in the lead. All navigation relied on compasses and dead reckoning; it was essential to account for the different declination of magnetic north in this region of Africa, which can be up to 30 degrees west, substantially greater than in North America and much of Europe.

The “roads” were large tracks that had not been traveled in many years, so the grass grew to 10–15 inches in height – further obscuring the actual trail. During the event, teams received instructions for special tests in the field, as well as TSD rally sections. “All in all, it was a very intense event,” Bill recalled.

Bill’s photos added to the impact of his descriptions of the journey and captivated everyone (including museum staff who had never heard of the event) and made the otherwise static field event more memorable. Additional fun followed that evening, as Bill’s friend in Lincolnville opened up her grounds to campers. Around the fire pit, stories flowed, and an evening of the discography of The Cowboy Junkies ensued – favorites of Bill and Bruce Fowler [of Maine Winter Romp fame]. Whether the guests of the neighboring posh inn shared the same enthusiasm for Bruce’s playlist or our choral performance of “Always Look on the Bright Side of Life” remains questionable.

Bill Burke’s 4-Wheeling America celebrates its 35th year in 2021. By the time you read this issue, Bill will have shared his knowledge with participants at the Mid Atlantic Rally in Virginia. We look forward to many more years of his experience and guidance in off-roading and overlanding.

“You drove that thing to Vermont?” asked an incredulous island resident – the “thing” referred to was my ’67 109” SW. The answer? Yes, definitely, and I couldn’t have been happier.

Living and working on a small island, my Land Rovers rack up more engine hours than miles. That means that, ahem, issues don’t always show themselves until I travel long distances on the mainland. The drive to this September’s British Invasion in Stowe, VT [500 miles round trip] highlighted some issues.

The drive from Maine to Vermont puts me on some of northern New England’s most visually scenic roads, especially this time of year. You take the Coastal Highway (US Route 17) and Route 2 East across Maine and the Presidential Range in New Hampshire, then cross into Vermont along the Connecticut River, picking up the narrow twisties of Rte 15 and, finally, the stunning Rte 100 to Stowe. In a sports car like my Triumph TR7 or Spitfire, it’s an exhilarating experience. In a ’67 109” Station Wagon, it’s more leisurely and still thoroughly enjoyable.

The hills may be “alive with the sound of music” to some, but for me, they resounded with the sound of shifting gears, whining overdrive, and a wound-up 2.25 petrol engine. A non-functional gas gauge and a single gas tank conspired to call for pit stop about every 120 miles; overly cautious, perhaps, but one empty tank during a long trip [see Winter 2020 issue -ed.] demonstrated my displeasure with that idea.

Cruising along the two-lane roads at speeds ranging between 35–60 mph lets you deduce the lives of those who live in the communities that line the routes. I saw plenty of evidence of former industries, such as a well-known toothpick factory and former working dairy and chicken farms, as well as current enterprises, giant paper mills, and newly revived farms. Given what was available for sale on the side of the road, plenty of Yankee ingenuity is still in force but shuttered and/or abandoned buildings indicate the hardscrabble nature of some places. Not surprisingly, railroad lines parallel the rivers, and roadways follow the railroad tracks. You could track the history of settlements just by observing the natural and human landscape.

Google Maps claimed the trip should take about five hours, but in a 4-cylinder 109” with necessary fuel stops, it required six. Weather in this region travels from west to east, so I ran into squalls, heavy at times, throughout the drive, but Rain-X proved to be a Series owner’s best friend. Some water dribbled past the non-existent door and scuttle vent seals, but the sun returned to dry out the interior.

The, ahem, issues that arose included squealing brakes, especially when damp, an occasional hiccup from the engine when under load on mountainous terrain, and a stop to apply duct tape along one alpine window to affix it to its desiccated rubber seal.

What wasn’t an issue was the ingenious middle seat, which required only releasing two thumbscrews to fold it down and up against the front seats. That allowed me to return to Maine with a large, self-propelled lawnmower and chainsaw. As the old advertisements claim, “Yes, versatile’s the word!”