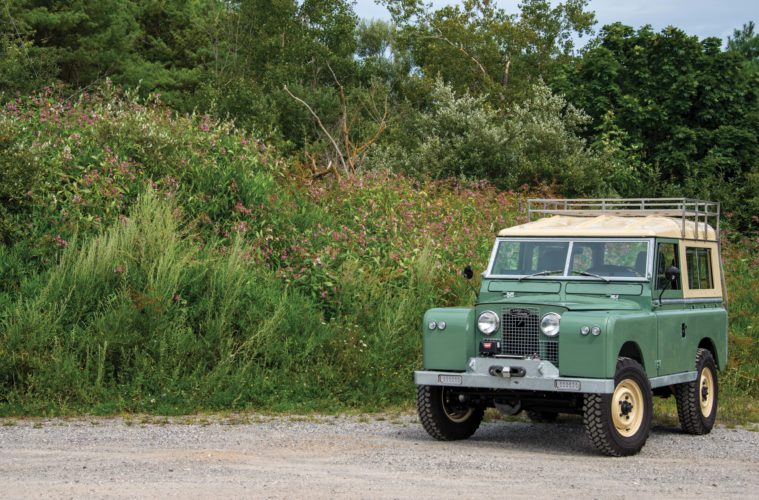 In for a Penny, In for a Pound

Jim Hawkins, Tucson AZ, describes his ’67 Series IIA as “the most fun you can have at two miles per hour.” 17 years after its purchase, it has finally completed its journey from Switzerland to East Coast Rover, Rockland, ME, and to its new home in Tucson.

Before graduating from the University of Nebraska with a Mechanical Engineering degree, Jim became interested in Rovers through Denise McCluggage’s stories about her Land Rover named “Dog,” which routinely appeared in Car and Driver [and once in Rovers Magazine -ed]. “I read her articles and that got me interested in Series Land Rovers. When I was transferred to Belgium in 1992, I sponsored a project with the Pasadena Arts Center campus in Switzerland, and a professor there was a Series owner and enthusiast. That really furthered my interest!”

As the General Manager for Caterpillar’s Mining Technology division, Jim has lived in several countries, moving eleven times since that first posting in Belgium. Susan Hawkins met her husband in high school and worked as an architect in Chicago before joining Jim and raising their family.

In St. Charles, IL, Jim bought a ’67 IIA RHD that became his daily driver for three years before Caterpillar send him to Geneva, Switzerland. He knew his IIA would require a new frame, so he put it in storage during his time in Europe. “I had confidence that it could be rebuilt because I could see that you could build a new Land Rover from the parts available through Rovers North,” he said.

While living and working in Paris in 2004, Jim found East Coast Rover and asked if they might restore his ’67. Eventually he had it shipped to ECR and their assessment of the IIA was gloomy. Jim recalls that “they had another ’67 IIA, that was in better starting condition, so I bought it – sight unseen – trusting a person and a company that I’d never met before. [ECR now specializes on Defenders only -ed.] I trusted Mike to undertake what came ‘naturally” to him, based on his considerable experience with Series Land Rovers and Defenders. I didn’t want the build list to become too extensive, but I understood that Mike would know the best modifications, if any, to make.”

“I loved my previous Series Land Rover, as it made every trip an adventure. My kids loved it too. I wanted to be a hero to my kids, so it spoke to me. I decided ‘in for a penny, in for a pound,’ and trusted in Mike Smith’s recommendations. I wanted it to be a lifetime vehicle.” (The “kids” now are Amelia, age 29, a novelist who works at a private high school on Long Island, NY, and Jacob, a Chicago-based pharmaceutical researcher into Huntington’s Disease.)

From initial photos of the “new” IIA Hardtop, Jim saw that it had a life in Texas, great for reducing possible corrosion but tough on paint and interiors. The IIA body and tub sat square and indented, always a plus. The next decisions rested with Jim, in consultation with ECR’s Mike Smith, to determine the levels of restoration and/or modification.

After a few years of daily driving his original IIA, Jim decided he wanted to improve the IIA’s functionality. Tucson’s average temperature in the summer hovers at 100 degrees, with winter (January-February) descending to a 65-degree average. With hot weather predominating, Jim accepted the recommendation that a Holley Sniper EFI (electronic fuel injection) system replace the standard Zenith carburetor. This system can be tuned digitally for different driving conditions. Using an EFI virtually eliminates the likelihood of fuel vaporization (vapor lock), particularly with today’s ethanol-laced gasoline. As an added protection, the electric fuel pump is mounted in the fuel tank, where the gasoline can help cool the pump.

Those same temperatures make topless driving a joy, so Jim had his hardtop equipped to run as a canvas top; that meant it would have a rear door, a tailgate and a hoop set with the necessary tie-downs. While the spare tire mount sits as originally in the rear tub, the rear door also provides a mounting point for a spare if desired.

When it came time to paint the IIA, Jim deferred to his wife, Susan, on color choice. “She’s the architect,” he said, “and she knows color and design. She researched the historic colors of Land Rovers [there were few on North American models -ed.] and chose its current Sage Green. There’s ample photographic evidence that she made the right choice.

As any Series Land Rover owner will attest, the leaf-spring suspension does not meet contemporary expectations in terms of NVH (noise, vibration and harshness). In fact, it seems to accentuate each of these factors, so Jim chose a coil-spring replacement chassis. Series drum brakes feel marginal in today’s driving situations, so the chassis came with the added bonus of standard Land Rover disc brakes.

“I didn’t need it to drive like a sports car,” Jim said, “I’ve got those already. But I do love the sound of the Rover 4-cylinder; it’s all part of the experience.” For a slight increase in horsepower and torque, Jim chose a Turner-built 2.5L petrol engine with the Land Rover 5-speed for extra flexibility and highway capabilities.

I had the good fortune to drive Jim’s resto-mod before ECR shipped it to his home in Tucson. The engine made the same wonderful noises that every Land Rover Series 4-cylinder makes, only with greater responsiveness and more vigor than the engines in my Series IIAs. Acceleration, usually not a concept associated with Series Land Rovers, was brisk through the gears and the Rover easily kept up with traffic on two-lane roads. The tight steering on appropriately narrow tires made for fine handling. As I was under strict orders not to damage the vehicle, it never did more off-roading than on a well-kept field, but I had no reason to assume it would be any less capable than any other Series Rover.

My all-too-brief test drive was made with Lou Sapienza, a photojournalist who is also rebuilding and modifying his trusty Series III (the first vehicle he ever owned). To Lou, the Hawkins’ IIA demonstrated the care and precision of East Coast Rover’s engineering. As his Land Rover undergoes rebuilding from his own “workshop,” Lou appreciates the steps necessary to ensure longevity and reliability, and he admired ECR’s craftsmanship.

As we go to press, Jim has finally enjoyed a few weeks with his Series IIA. “I’m absolutely loving it,” he said in a phone interview. I’m reminded that it’s a 60-plus year old design. It’s a 1960s driving experience, which is part of its charm to me. It absolutely meets my expectations – it’s all great!”

“My epiphany is that a Series Rover demands the full engagement and attention of the driver. This is what I find so charming about it. I have reveled in opportunities to drive race cars -which demand one’s full attention – and in return, provide an escape from the day to day grind of life.   When I go to the race track and spend a couple hours flogging my kart around the circuit, I am totally relaxed afterward, and ready to take on whatever intellectual challenge may be presented. A Series Rover does the same thing – every time one takes the wheel. That is what I love most about it.