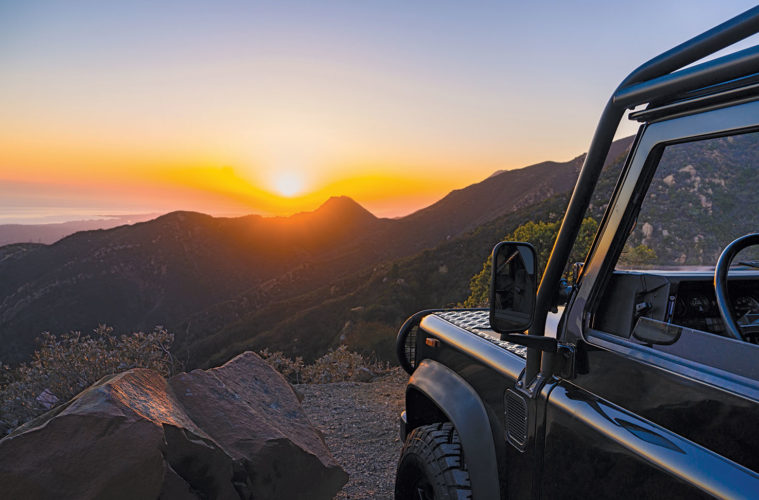 Decades ago, a garage band in South Bend, IN, named The Rivieras, recorded a one-hit-wonder, “California Sun.” Nothing like unending Midwestern winters to make you long for the mystique of sunny Southern California.

After all, where else can you go to indulge year-round in a choice of daily drivers like various Series Land Rovers, a Land Rover 90, a ’56 Porsche Speedster replica, or a ’73 BMW 2002? Certainly not the salted-road states of New England or the Northeast. That’s why enthusiast Scott Rouleau traded the cold and snow of New England for “The American Riviera,” Santa Barbara, CA.

The move made it possible for Scott to indulge in his twin passions: automotive enthusiasm and communications. In New Hampshire, he had worked to promote timber frame building companies and indulge in his enjoyment of classic BMWs by working at the highly-regarded Bavarian Autosport in Portsmouth, NH. In California, he could rebuild Land Rovers and create his eponymous communications firm.

Born in Hanover, NH, Scott grew up in Norwich and Post Mills, VT, and graduated from the University of New Hampshire. In 2001, he set up his first business in West Lebanon, NH, working with log and timber frame home companies. That’s when he bought his first Land Rover, a ’96 Discovery I with only 40,000 miles. He would add another 110,000 miles through numerous trips to Louisville, KY. He traded it for an ’04 Discovery II SE7, “one of my favorite Land Rovers,” but a succession of Series Land Rovers and a Land Rover 90 have truly captured his passion for the marque.

His first Series Land Rover was a ’69 IIA Bugeye. “I drove it for years here in Santa Barbara and loved it even more after I removed the hardtop, installed a hoop set, and ran it as a canvas top. It’s been all over Los Angeles, Beverly Hills, and Marina del Rey, and interesting people like Martin Gore of Dépêche Mode and Ellen DeGeneres have ridden with me in it.” (Scott noted that DeGeneres bought her wife, Portia de Rossi, a restored Defender as a gift.) Scott sold his IIA to another enthusiast, but at least he gets to see it around Santa

It’s not his only Bugeye rebuild, either. “I bought one in Apple Valley, CA, and did a frame-off rebuild of it with the help of Paul Livacz. A doctor in Connecticut now owns and enjoys it. In 2020, Scott found a Bugeye “in parts” in Phoenix, AZ. Then Covid-19 hit and an enthusiast from Portland, OR, called him, looking for a “parts car” he could use for his own rebuild. The pandemic seemed like a good time to send the Bugeye to a new home.

Over Valentine’s Day weekend of 2019, Scott and his wife, Amber, were enjoying a bottle of wine when the phone rang; would he be interested in a ’73 Series III? Scott remembered that he had seen “horrible photos” of the Land Rover, but low-cost airline tickets enticed him to fly up to Bozeman, MT to view the Series III. “The owner met me at the Bozeman Airport,” Scott recalled, “and to my amazement, it was in stunning shape! The current owner had enjoyed and maintained it for 30 years. It was a federal bank holiday, so all I could offer him was a personal check. I rented a truck and trailer and brought it home. It’s now with yet another enthusiast.

Scott also created a resto-mod 109” from a ’64 Series IIA. It now sits on a coil spring chassis and features a 4.2L Range Rover motor and automatic transmission. Once it became known in the Los Angeles region, Scott received requests for it, and the IIA now resides with a soap opera star in Malibu, CA. Additional rebuilds have included a ’63 Series IIA 109” and two Series IIA 109” Military.

His most recent Land Rover is a ’90 Land Rover 90, which began life in Italy with its current 200 Tdi engine and original 5-speed manual transmission. “I got word that it was on a backlot at a Los Angeles movie set,” Scott recalled. “I drove it home; it looked good but it had been sitting for about a year. After a closer look, I decided to refurbish it.”

“I worked with The Toy Store, Newbury Park, CA, on renewing the paint. I traced the VIN number to discover that it began life in white, and then became Tangiers Orange before its repaint in black.” The handsome results prompted Scott to renew the seats, fascia, and sound system.

At 174,000 miles, the frame remained solid but Scott decided to refresh the engine. The engine benefitted from new main and rod bearings, new valves and a skim of the cylinder head, a new water pump, timing belt, head gasket, and main seals. While the engine was out of the 90, Scott had the shop install a new clutch and pressure plate. Although not required because of its age, Scott stated the 90 would now pass California’s strict smog test.

With its new interior, exterior shine, and fresh engine, Scott decided to renew the suspension as well. He entrusted that work to Karl Wesson of Coastline Defender, Hawthorne, CA. The work included new OEM springs, tubular shock towers housing Fox shocks, galvanized spring seats, and hardware. While everything was apart, Scott ordered new tie rods and had new bushings installed in the radius arms. New bushings also went into the freshly powder-coated trailing arms. For good measure, the front/rear axles and Panhard rod received the same powder-coating treatment. Finally, brake components and the prop shafts were replaced, too. To Scott, “The underside is now better than anything that came from the factory.”

When Scott is not working or building up Land Rovers, he’s hiking the many mountains in his area, recalling his 2019 ascent of Mt Kilimanjaro in Tanzania. He’ll be the first to insist that the biggest smiles on his face appear when he’s behind the wheel of his Land Rover 90.

[Scott loves to connect with Land Rover enthusiasts at @scottrulo or RouleauCommunications.com]