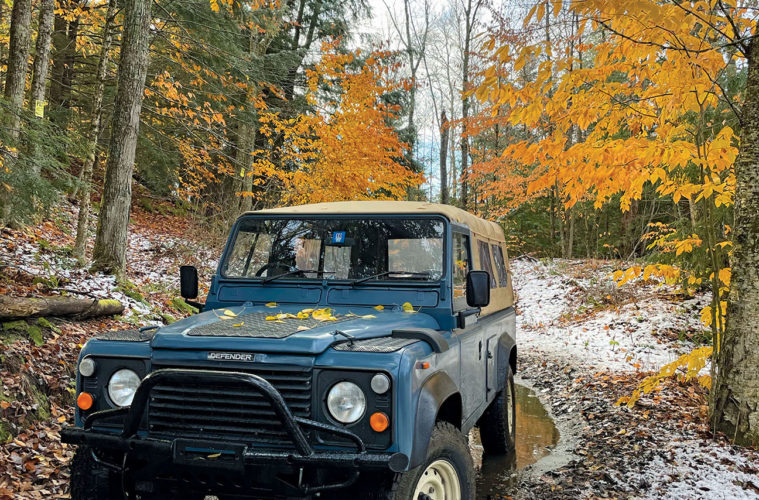 Analog Guy in a Digital World

Cole Hanson, Burlington, VT, works on the cutting edge of aviation technology as part of the team at Beta Technology, a VT-based aerospace manufacturer that develops electric, vertical take-off and landing (eVTOL) aircraft for the cargo and logistics industry.

After graduating from the University of Vermont in 2018 with an engineering degree, Cole decided to remain in Vermont and look for work in the aviation world: “I searched for aviation-related companies because they interested me. I did not want to work for a component manufacturer. Lockheed Martin had an office around the Burlington Airport, but I applied at Beta Technologies when the company was only a few months old. I was so intrigued that I was willing to take the trash out for free just to be around them, but they hired me instead.”

Cole knew that when he moved from Dallas, TX, to Vermont, he needed the right vehicle for Vermont’s long winters, its “mud season” and its handful of summer days – but he needed to find the right ride on a small budget. Cole spotted an ’88 Range Rover Classic in a Craigslist advertisement. The owner was Leigh Williams, the famous chocolatier of Stowe, VT’s Laughing Moon Chocolates. When Cole expressed his interest, it was a done deal. Leigh said the constant battery drains frustrated her; “I just want it out of my sight.”

Cole showed up with cash and a fresh battery, and drove the Range Rover home in October 2019. Turns out the problem was an aftermarket alarm system; once ripped out, the battery never failed again. [Engineers can do things like this -ed.]

He loved the Range Rover Classic but, he explained, “I grew up with standard transmission cars and always loved – no, lusted after – a Defender.” After another search, Cole decided to work with Derek Chance of Green Mountain Imports, Woodstock, VT. “We looked at different ones,” Cole said, “and I settled upon a ’93 ex-MoD Defender 110 soft top with a 2.5 diesel. It had been used as a medic transport vehicle, so it had low mileage. Derek agreed to meet me at the Rutland, VT airport to view the Defender.

“Funny enough,” Cole recalled, “I had bummed a plane ride to the Rutland Airport. I tossed my bag of tools in the back, hoping for the best. Coming in to land, it was weird to get a bird’s eye view of the Defender from the air. I’d only seen a Defender once before! I was super excited and apprehensive at the same time, but it turned out to be everything I hoped for.”

“The drive home went great, even though it was my first time driving a RHD vehicle. I had brought earplugs and rolled the top up. It was slow but fantastic. People honked and waved, which was exactly what I was going for.”

The Defender became Cole’s only car, and thus, his daily driver, but as winter approached he had second thoughts. “It’s an absolute blast to drive, but I dreaded what the winter temperatures of –25 degrees F would do to starting it in January,” he said. Without the capability to run a block heater, his concerns rose, so he decided on an engine swap.

Cole returned to Craigslist and found a 4.1L (250 cu. in.) GM engine in Manchester, VT, and completed the transfer himself. He had to purchase an adapter, drill and tap a Chevrolet flywheel, yet was able to retain the Land Rover clutch and transmission. “I have to admit it’s a lot quicker and quieter,” Cole said, “and it has no problems starting at winter temperatures. The purists get agitated, but it’s a mechanical improvement. I even painted the motor Land Rover green. But I kept the manual choke, as it’s a perfect anti-theft device!”

The other major enhancement came last August when Cole and his girlfriend, Bella Reilly, a UVM student and intern at Beta Technologies, decided to give the Defender a paint job. “Bella and I created the paint color by mixing up Rustoleum blue and grey paints. We actually used rollers and brushes; it took a few coats for us to get the color right. I was so pleased, I installed a new Exmoor soft top.”

Whether it’s his love for his Defender, or his delight in piloting a Piper Cub with Bella (also a pilot), Cole appreciates the analog nature of his vehicle and his plane. “It’s very exciting to work with the latest eVTOL airplanes, but my heart is with the simple and direct. And I have the good fortune to live and work near Rovers North!”

Beta Technologies considers electric power the inevitable future of aviation and wants to bring this future to the present. That’s what they’ve been doing from their South Burlington, VT headquarters since 2017.

In addition to newly minted engineers like Cole Hanson, Beta has assembled an experienced team to design aircraft using electric power propulsion. Their eVTOL (Electric Vertical Take Off and Landing) prototypes have already demonstrated the capabilities of their technology. Beta also offers internships; of the fifty students currently interning there, many come from our home-state University of Vermont (UVM).

Beta focuses first on cargo-carrying capabilities; the company already has contracts with UPS for general freight, United Therapeutics for delivery of medications, and both the US Air Force and US Army. EVTOL aircraft do not need vast runway space and can deliver directly from a distribution center to a retailer or client. With their electric propulsion, they are less polluting than the typical petroleum-based, aviation-fueled planes or helicopters. Depending on the source of the electricity for their motors, they can be more sustainable, too.

Beta claims that its Alia 250-C, “is just simple enough to be revolutionary.” With a range of 250 nautical miles, a take-off weight limit of nearly 7,000 pounds, and a charging time of less that one hour, it seems destined to change the logistics of delivery.