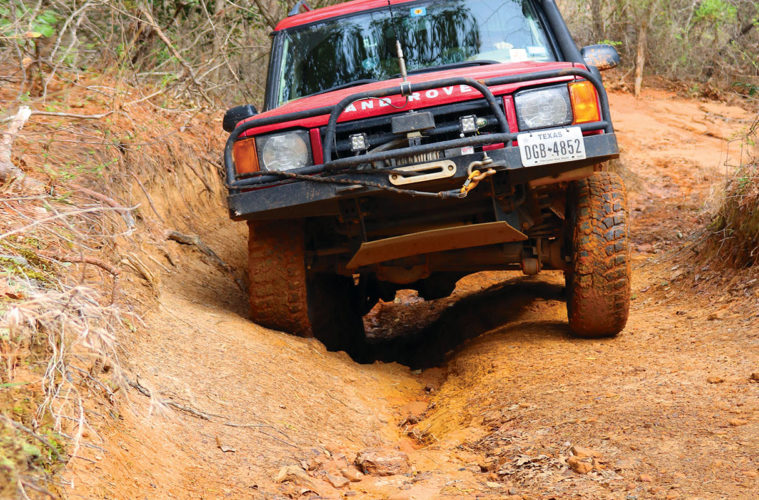 “This would be a good place for photos,” said Trail Leader Arto Pullinen. He pointed up the steep hill of aptly-named Clyde’s Ravine. I exited his Discovery II and began yet another arduous climb – one of many at the 2022 SCARR [South Central Area Rover Rally].

Texas Rovers created SCARR 18 years ago – the 2022 edition attracted 134 Land Rovers and over 200 enthusiasts to the Barnwell Mountain Recreation Area in Gilmer, TX. SCARR has always drawn participation from nearby states, but with the pandemic easing, enthusiasts drove all the way from New England, Virginia and Florida from the east and California and New Mexico from the west.

The Barnwell Mountain site comprises 1,800 acres of campgrounds and 27 miles of different trails for motorized vehicles from dirt bikers to Land Rovers. Texas Rovers promotes sponsorships to rent the entire facility for SCARR, assuring that you’ll see only Land Rovers on site and won’t confront a convoy of trucks, side-be-sides or motorcycles blocking your way from the opposite direction. To these New England ears, the Barnwell Mountain staff twanged in a very Texan manner and sounded very friendly (assuming I understood them correctly).

Not surprisingly, a vast state like Texas encompasses a wide range of topography, but most of it looks flat. East Texas not only offers some hills, but even roads with a few turns. During early April, the fish are jumping and the pollen has returned – in vast quantities. Lexi Pereda, Ft. Worth, TX, said, “I always tell visitors to Texas to start taking your allergy medications a few days before you plan to arrive.” (I will heed that advice on my next trip.) The red clay soil absorbed the little bit of rain that fell, just enough to keep the dust down, but not so much to create slick rock conditions.

Those same rains often arrive with a vengeance, which might explain the severe erosion that has afflicted trails such as “Humdinger” or “Jeep Eater,” and made others like “Solihull” impossible to climb this year. The Texas soil covers massive boulders that become ledges onto which you must drive your Land Rover. When they’re wet, the narrow tracks are simply too steep and slippery for vehicles to climb. Those same ravine walls seem to close up on you when your Rover tips to one side or the other – watch out for your roof racks.

Relatively speaking, the Texas climate preserves vehicles quite well, which means enthusiasts there can run Land Rovers for decades; when you’re not replacing frames and bulkheads, you can load up with lift kits and recovery gear. With Texas’ comparatively low fuel prices, you can afford to trailer in more purpose-built Land Rovers; when was the last time you saw two Bowlers in the US at the same time?

I had the pleasure of jumping in with different drivers in a wide range of representative Land Rovers. Emilio Andrade, an anesthesiologist from Dallas, took his stock Discovery 5 onto the Intermediate trails. His longtime Land Rover affiliation arose from his childhood in El Salvador, where his family still has a Defender 110 working on their farm. He regaled me with stories of a childhood spent between two countries, while he skillfully navigated his Discovery up and down the loose rock ravines.

Caleb Reynolds, S. Austin, TX, works in the insurance profession but clearly has an outsized interest in beefing up his ’04 Discovery II (@LuLutheD2). While ascending the rocky face of a challenging stope, Lulu broke a rear axle. Caleb knows his vehicle well; he had a spare axle and hub back at his camp – but we still needed to get Lulu out of the way. With a small convoy behind him on the narrow trail, reversing was not an option. Winching it further up the hill would require two different sets of the winch, but with a team effort, everything went smoothly and safely. Once on flatter ground, Caleb drove back to his camp site and effected the field repair.

Texan Veronica Brown drove her family’s Range Rover Sport in search of a trail run and fell in behind our convoy. Only its street-oriented tires let it down. With a carload of children, they wisely accepted a winch recovery. Throughout the day and night runs at SCARR, winches whirred as ground conditions ranged from dry clay to wet surface, loose rock to sharp ledge. The changes caught some unaware by virtue of tire choice, but the yelps of delight from drivers or passengers experiencing their first navigation of obstacles they thought were insurmountable brought applause from the entire convoy.

Trail leaders Arto Pullinen, Joey Pitts, Michael Neal, David Dousay and Tim Carter split the runs up into Beginner and Intermediate levels and took the time to check vehicle kit and condition to reduce the chances of problems out on the trails. Ideally, vehicles with winches would be interspersed throughout the convoy in case the terrain proved too much for a Land Rover’s tires and/or driver capability. Arto has served as trail leader for beginners over many years, and the Discovery II he brought for this year’s event has served him well from new. He alerted the convoy members with precision and calm, stepping out often to assist with spotting as necessary. For the many newcomers to Land Rover off-roading, his demeanor was undoubtedly reassuring.

Joey Pitts, Bridgeport, TX, splits his time between the family trucking company and his own Pitts 4X4 off- road training business. A certified off-road instructor, Joey demonstrated his mastery of the trail network as well his stock ’95 Range Rover Classic. Whether ascending or descending, Joey knew exactly where to place each wheel for the best traction while minimizing impact on the suspension or drivetrain. I felt clumsier walking up or down the inclines than I did in Joey’s Range Rover while underway. He gave me a lesson on vehicle sympathy, and while never seeming to fight the trail, reminded me that “You’re in charge, not the vehicle.” Joey also demonstrated centering the Range Rover; he never forgot that where the front goes, the rear must follow.

I could only follow Michael Neal, Lakewood Village, TX, as he had already ensconced wife Sarah and 3-year-old son Carson into the form-fitting racing seats of his Bowler Wildcat. With its massive tires and minimalist body panels, the Bowler would go anywhere, but Michael remained patient as beginners and intermediate-level drivers filed through. David Dousay, Fort Worth, TX, has the genial disposition and matching beard of ZZ Top; his hard-worked Range Rover Classic led groups each day.

Barnwell Mountain features several campsite areas spread out over its considerable acerage. Each of the six areas provides a different camping experience, from plugging in your RV or trailer to simpler tent sites, as well as different levels of noise and sleep. The ultimate entertainment is always at Old Camp, also known as “The Fun Zone,” and this year’s music, food and festivities rivaled those of past years.

It’s Texas, so food matters, and there’s not a better food truck in the state than Roz’s Eats from Kilgore, TX, which, to my delight, returned for another SCARR. The big feed happened on Saturday night, when attendees assembled for dinner under a packed pavilion. Once fed, everyone pulled out their raffle tickets – and bought a lot more – in an effort to win the prizes donated by sponsors. Emilio Alcazar and his daughter, Victoria, won a Defender nudge bar from Rovers North, perfect for his work-in-progress, a quad cab RHD Defender 142 with a dump bed. “It’s a project right now,” Emilio said, “but the nudge bar will be the perfect addition.”

SCARR runs on the good will of its volunteers. Event Coordinator Laura Shacklette deserves plaudits for the smooth operation of the tightly run event. Just as importantly, knowledgeable techs such as Alan Avery (North Texas British) and Darrell Oliver (Oliver’s Automotive) not only provided financial sponsorship, but gave of their time and expertise to help with trail support and field repair. Not all the repairs went smoothly; some required drives as far away as Austin and Houston for new Defender parts, but come Sunday afternoon, no Land Rover remained stranded at Barnwell.

134 vehicles carried over 200 enthusiasts who registered for the event. While only four brought their Series Land Rovers to SCARR, 23 Defenders – heritage and new – and 78 Discovery 1—5s tackled the trails. Texas Rovers celebrates its 25th anniversary this year, and judging from the smiles seen at SCARR, they’re on their way to another successful quarter-century.