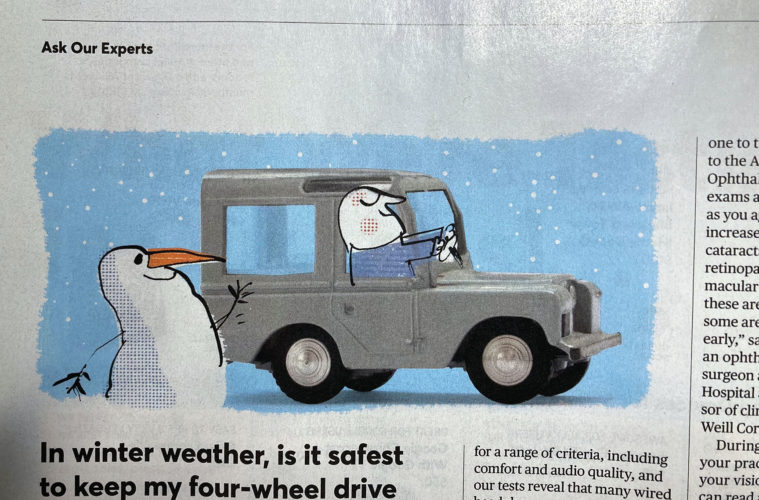 In Northern New England, we don’t experience “Spring” so much as “Mud Season.” This year, a Vermont newspaper headline read, “It’s of Biblical proportions: Vermonters contend with mud season unlike any in recent memory.” In Aroostook County, Maine, a local post office suspended mail delivery when rural mail carriers’ vehicles sank in the muddy roads.

As the region dries out (a bit), we consider whether to wash the Land Rover or open up the hundreds of emails and snail mail letters that arrive at the Sightings desk. It’s always helpful for veteran and novice Sighters alike to review the rules that govern when we award a Coveted Mug:

Rule #2 – If your Sighting doesn’t really surprise you, it won’t surprise us, either – thus we can’t award you a mug. We’re delighted, but not surprised, that Land Rovers appear in British television programs, British publications, films with British themes, and media covering African safaris. You shouldn’t be surprised either and should consider another way to get a coffee mug.

Rule #4 – If you qualify, one mug per Sighting per issue. No more than two Coveted Mugs will be awarded to the same person per year.

Rule #5 – Sightings that are Land Rover references in books go to our Literary Land Rover editor for a mention, but only when space permits.

Rule #6 – Psst…Email submissions – remember we can’t send a mug by e-mail. Send us your real name and shipping address, too. (To assure your privacy the magazine does not have access to Rovers North customer information.)

Rule #8 – Grudgingly, very grudgingly, the Editor admits he might have made an error. Let us know if you think you’ve been jobbed, but all decisions of the Editor are final.

Movie and television producers still know the draw of a classic Land Rover in their films. Daniel Dentry [see Rule #6] spotted the Defender in the Nicolas Cage film, The Unbearable Weight of Massive Talent, as did Stephen Lister, Utica, OH. Buried deep in a viewing of an old Christmas special, Eric Brumwell, Bainbridge Island, WA, spotted a toy, Land Rover. Eric also liked seeing the Series III pickup in the British and Australian film Eternals. Steven Lister, Utica, OH, was delighted to see a Defender 90 as a lead character in the Netflix kid’s film, Back in the Outback. Brent Lane, Saco, ME, watched an episode of “The Lost Kitchen,” and was fairly certain he saw a Discovery II. Dave Whaling [See Rule #6] watched a Hallmark Channel movie, The Presence of Love, which included a RHD Defender. P T Schram, Churubusco, IN, spotted a three-door Freelander in Trailer Park Boys.

Magazines also have an affection for Land Rovers. It’s hard not to love the cover of the latest Yankee Magazine, noted Cindy Theodore, Wolfboro, NH. Shooting Sportsman ran a feature on “Elizabeth,” a ’95 Defender 110 customized by Helderburg LLC, in Sharon Springs, NY. James Hutchinson [See Rule #6] spotted an article on the UK’s Everatti conversion of a Series IIA to electric power, and one in Hemmings that linked to a video on the long history of the Land Rover. Consumer Reports, which generally pans Land Rovers, used a drawing of one to illustrate a question on 4WD for a reader, noted Tim Glahn, Midlothian, VA; Steven Regula, Hewitt, NJ; and the father-son team of Paul and David Ritchie, Upland, IN. Kathleen Bergeron, Salisbury, NC, spotted an ad in Texas Monthly magazine for Pakmule Cargo Carriers, with one mounted on the rear of a Defender 90. When Bertucci watches wanted to signify toughness in a print ad, they chose a Defender 110 Quad Cab as the accompanying illustration. Brent Lane, Saco, ME, found one in an interesting article about an all-female anti-poaching team at an African game preserve in Rotary Magazine. Jason Sheehy, Mt Sterling, OH, and Jim Wollschlager, Mystic, CT, noted a stunning Defender 90 with a hunter, his dog, and a handsome shotgun in a Bachieri & Pellagri USA ad.

In an unusual Sighting, Tom Spoto, Bellingham, WA, and Jim Leach [See Rule #6] spotted the Land Rover/Mutual of Omaha tribute in the Rose Bowl Parade. P T Schram, Churubusco, IN, wondered why a Wall Street Journal video on chip manufacturing chose a Defender 110 to include in the video. He also stopped for work at Carlex, where he watched a “company morale booster video” showing a Defender 110 driving through a forest. Lastly, he spotted a RHD Defender on the Mexpro.com website. Robert Alley, Marietta, GA, found an interesting article on Abu Dhabi’s oldest private school, complete with a period photo of a 109” with the schoolchildren. Matthew Clark, Seattle, WA, and Ray Sisk, Hope, ME, read a newsfeed on a bomber arriving at the Tinker AFB in Oklahoma with an RoW Defender 110 alongside in the accompanying photo. Loic Fabro, Herndon, VA, spotted a Discovery I rock climbing in an ad for BF Goodrich during coverage of the King of the Hammers off-road race. Lana Fabro, Herndon, VA, spotted a Defender with a prominent role in the video game “State of Survival,” the perfect setting for a heritage Defender. Yes, they’re made in England, but Ken Gummerson {See Rule #6) found Series Land Rover cuff links for sale – very cool.