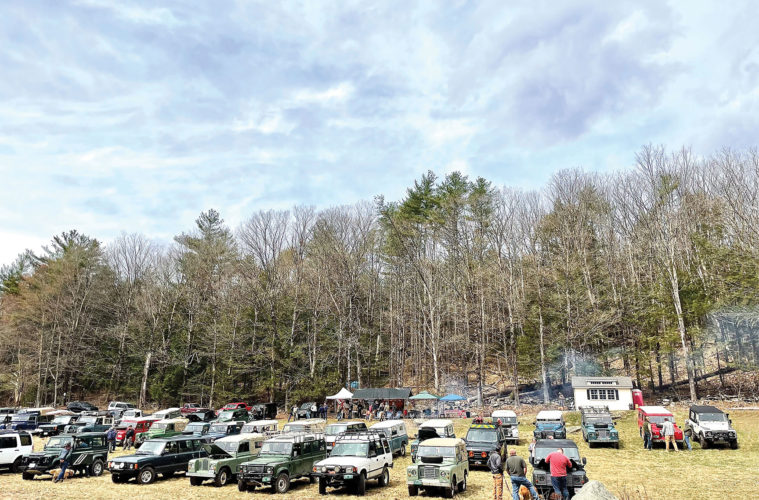 Do you really need a good reason to host a gathering of Land Rovers? The answer is “No,” but a weenie roast is as good as any.

Our Vermont Rover Club has no charter members, no bylaws, and no dues. The closely knit group gets together infrequently to hit some trails. Over the past few years, we have organized weekend-long events incorporating camping, off-roading, bonfires, and of course food. Last February, Glenn Parent and I decided to host a one-day “Vermont Rover Club First Annual Weenie Roast” held on his family’s 15 acres in Grafton, VT on April 16, the day after federal tax returns were due.

Weather in this area can be very uncooperative during April, but we took a chance and officially announced it. We both reached out to all the known Land Rover enthusiasts, followed by a general announcement on social media. As the date approached, the weather forecast read “100% chance of rain for the next 10 days.” This prompted a lot of queries as to whether we planned to cancel or stay the course. It’s Land Rovers; of course, we would welcome the sun, but it would go ahead, rain or shine.

I reached out to Brattleboro chef and buddy Zach Corbin of Peter Havens Restaurant to help me source a bulk order of quality hot dogs. He offered to buy premium, all-beef frankfurters for me through his supplier in Boston. I didn’t know the attendance in advance, so I ordered 240 hot dogs and buns to be safe. On top of the hot dog staple, we invited attendees to bring their favorite snacks or picnic food.

Glenn and I, along with our wives Zoie and Robin, respectively, and a couple of other volunteers, arrived at the event location on Friday to set up the fifty feet of canopy tents, assuming that it would rain all day Saturday. The huge burn pile we had assembled for the bonfire a few weeks prior was still covered with tarps. We were all set for the main event.

On the “Weenie Roast” day, we were quite pleased, as Land Rovers of every vintage began filling the field from about 9:00 am onward. At the height of activity, I counted 55 Land Rovers, with a few that had come and gone beforehand and a few more that arrived later. People came from all six New England states and New York. The farthest may have been Leif Counter, who ferried and drove from Martha’s Vineyard with his girlfriend Maggie Bucci in his Series III 109”. John Vallerand drove five hours from Greene, ME, in his Defender 130 towing an aluminum teardrop sleeping trailer. Jon Peter Fudge and his son-in-law Brian made the trek all the way from the New Haven, Connecticut area in his newly restored ‘69 Series IIa. There were a couple of Series Is along with an assortment of Series II, IIAs, and IIIs. Defender 90’s, 110’s and 130’s showed up in a few different configurations. Several Discovery and Range Rover Classics also came, including Chef Brent’s early 90s 4-door Range Rover Classic that won “Best in Show” at the British Invasion a few years ago.

David Nunn, Christina Young, and Bill Mariano from the Land Rover Experience in Manchester, VT, arrived in three modern Range Rovers. All three of them could not resist getting right into the middle of the mud-and-recovery situations taking place up in the woods behind the tents.

The event site had 5 acres of fields where the Land Rovers lined up for viewing, but beyond the tree line lay some very challenging trails that we had cut a couple of years ago. I should say that it’s more of a course than a network of trails. Four long strips of stone ledges that stand like a group of leviathans emerge from the forest floor, offering a variety of intense natural obstacles with several beds of muddy forest floor between them. A few of the adventurous types took their Rovers up into the woods to check out the routes and, in most cases, experienced a setback of some sort. The only one that continually drove the full course without trouble, multiple times, was Mike Kenney in his highly modified late Series IIA. His Rover turned out to be the main recovery vehicle for those stuck in the muck, and also the main shuttle for those wanting to experience the run inside a Land Rover as an observer.

My friend John Martin from Chesterfield, NH, traveled with his 80-year-old father, John Sr, who had purchased a new Series III 88” in 1973. That Land Rover has been sitting dormant in a rusted state for many years. After Mike took the Martins and me up through the woods, John Sr again proclaimed, “That’s it – gotta get my Land Rover done!” Very little damage resulted from our runs. Only Rob Wollschlager, Colchester, CT, suffered a small bump on the nose of his ’90s Range Rover Classic. The final drop on the farthest piece of the ledge is very steep and off-cambered, so making the tight left turn at the bottom of the hill is tricky in a larger vehicle. A Series 88” is short and light enough to make it, but the sheer weight and size of the Range Rover Classic sent the passenger side into a small tree while attempting the turn. No major damage though, and these small recovery episodes provided the extracurricular activity at the gathering.

The cooking of the wieners started around midday with John Vallerand manning the grill. Many people brought food to share: salads of every kind, shrimp platters, veggie platters, pies, cakes, cookies, charcuterie boards, chips/salsa, etc. Mike Kenney brought his deep fat fryer, so we even had curly fries for those who wanted them. There was no excuse for anybody to say they left feeling hungry. When the local fire chief arrived, we touched off the brush pile with a small dousing of gasoline, sending flames and plumes of smoke into the air. We follow the rules of the Vermont Rover Club.

After so much consternation over the weather, it didn’t actually start to rain until around 6:00 pm, after all the Land Rovers had left for the day. All in all, the turnout was better than expected for a first-time event and we are now looking forward to the 2nd Annual Vermont Rover Club Weenie Roast next year. We plan to incorporate a parts swap as one of the key components of the event for next year, so start amassing your boxes of old doubles and spare parts to bring along next spring.