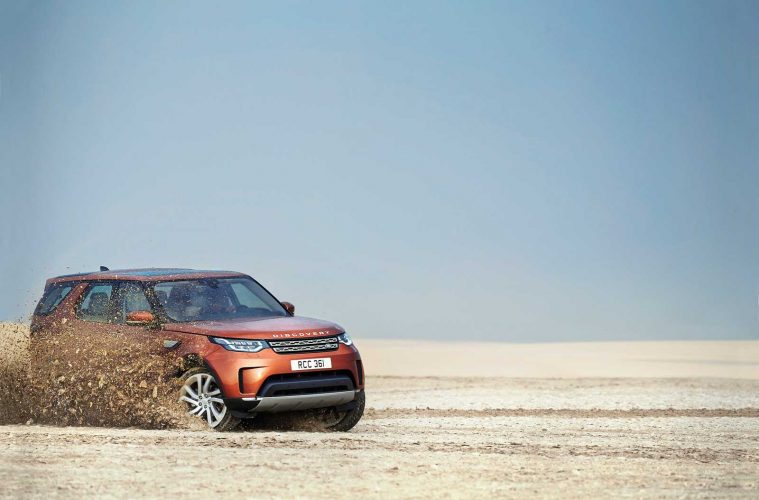 Back in 1993, Prince decided to change his name to an unpronounceable symbol. His music remained widely popular, but you couldn’t identify him by a comprehendible name.

For North American enthusiasts, Land Rover did something similar in 2005, by dropping the beloved Discovery nameplate for the alphanumeric “LR 2/3/4.” It fooled no one in the Green Oval world as we knew of the Freelander II and Discovery 3 and 4. The “name that shall not be spoken” returned to North America with the introduction of the Discovery Sport in 2015, and for 2017, the “new” Discovery.

The 2014 New York Auto Show saw the unveiling of the Discovery Vision Concept aboard the Intrepid Air and Space Museum and this model hews to the design themes presented that year. “New” sounds trite, but this model does offer significant changes. From a styling perspective, Land Rover claims it carries the “distinctive stepped roofline” and “command driving position” that are hallmarks of the Discovery. It took a while for Discovery II fans to embrace the look of the LR3/4, and the experience might repeat itself with the ‘17 Discovery.

For off-road maneuverability or trailering, the new Discovery has a 115-inch wheelbase, 1.5 inches longer than the LR4. The overall length of 195.7 inches adds 5.5 inches to the LR4’s length. Nonetheless, it has an 11.14-inch ground clearance, an approach angle of 34 degrees and a departure angle of 30 degrees. The “wink-wink” wading depth rose to 35.4 inches, while the new suspension allows for wheel articulation of 19.7 inches.

Land Rover shed the traditional body-on-frame for a unibody aluminum structure; it also lost over 1,000 lbs. as the new model weighs in at 4,835 pounds. The reduced weight will undoubtedly improve the EPA fuel economy of 19 highway/15 city (Land Rover had not released EPA figures at press time.) With the entire bodyside cast as a single panel, off-road dents might be harder to repair, but it does aid manufacturing and enhance the interior packaging. The front and rear suspension use a double wishbone layout in the front and a multi link layout in the rear. The subframes help provide stiffness for control as well as protection of chassis and powertrain components.

Engine options in the new Discovery include the 3.0 L V-6 supercharged petrol, with 340 hp and 332 lb. ft. of torque, or the 3.0 L V-6 Td6 turbocharged diesel, which delivers 254 hp and a massive 443 lb. ft. of torque at only 1,750 rpm. The Discovery shares the diesel option with the Range Rover and Range Rover Sport. Both engines come mated to a ZF 8-speed automatic.

Off-road enthusiasts will be pleased to know that you can kit out your Discovery with a traditional two-speed transfer case, but with the capability to shift between high/low range without stopping, up to 37 mph. The standard setup is the Torsen Differential with a single speed transfer case. Sensors built into the Discovery shift torque to the axle with the most grip, up to 62/38 and 22/78 splits. The Discovery also offers the All-Terrain Progress Control, which uses the cruise control to allow the off-road driver to hold a crawl speed. Another feature called Low Traction Launch helps reduce slippage from a stop on muddy, wet or slick surfaces. The Terrain Response technology has been enhanced in its 2.0 update to connect transmission, suspension, braking and throttle response options based on off-road conditions.

Standard springing is coil, but an optional air suspension system features a two stage off-road mode to add nearly 2 or 3 inches to ride height when needed, as well as a cut-out to prevent lowering when wading, or if bottoming out. Other familiar off-road assists include Hill Descent, Gradient Release Control (slows braking when starting on an incline), Electronic Traction Control and Roll Stability Control.

If you tow a trailer you’ll find optional assists to actually steer the Discovery for you using the Terrain Response knob. You can also adjust the rear height to ease the task of latching the trailer to your vehicle. And—sigh—yes, you can kit out your Discovery to parallel or perpendicular park your Discovery for you.

A noticeable change comes with the new, one-piece tailgate. Land Rover claims it improves sealing and body strength, and for versatility, offers a powered inner tailgate for, well, tailgating. The asymmetrical rear window remains intact, and a full sized spare can be ordered. Another change comes with a power switch or smartphone app system to adjust the second and third row seats from the rear of the Discovery, or from outside the vehicle. Happily to my eyes, the Discovery’s paint palette extends well beyond the 50 shades of grey that dominate contemporary color schemes. The 18 colors available include red, blue, green, orange, white and silver. You can also personalize your Discovery with a contrasting roof in black or grey.

The Discovery retains its 5-seat configuration as standard and you can order a 7- seat option which, Land Rover insists, will really carry seven adults in comfort. Inside the Discovery, you’ll find the bag hooks, map pockets and storage boxes that came with first models. A center console storage area can hold laptops or an optional freezer/cooler compartment. MSRP starts at $49,900 for the petrol model, with the diesel HSE starting at $58,950. Checking off additional options, Luxury or First Edition packages will elevate the price to over $70,000.

Welcome back to the Discovery nameplate in the North American market. We look forward to testing one when they become available publicly.