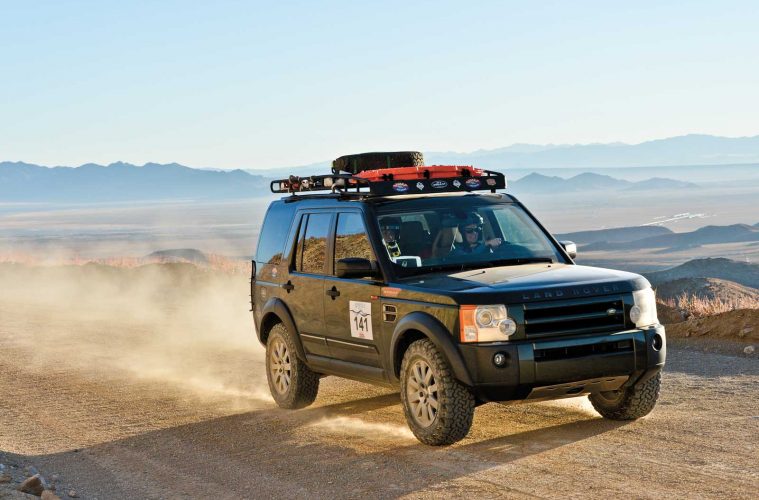 For many years, off-road racer Emily Miller encouraged and mentored American teams for the Rallye des Gazelles, the world’s foremost women-only off-road navigation rally. With the launch of the Rebelle Rally, her team created the first women’s off-road navigation rally in the US. Forty teams of two women each search for checkpoints over a 2,000-mile, 7-day course, using only compasses and paper maps—no electronic devices allowed. Teams earn points for finding a checkpoint through its coordinates, but they must choose their own routes over unknown terrain. As Emily Miller noted, “If it was easy, everyone would do it.”

Website guru Laurie Van Dyke, Scottsdale, AZ and former librarian Pam Jongert, West Jordan, UT, called the first day in their ’05 LR3, “the best of times and the worst of times.” As Laurie (“It’s my LR3, so I’m the driver”) explained, “We missed some checkpoints. We found 7 of the 11 called for that day. It’s really challenging as you’re not really sure where in the world you are and the ‘road’ gets rougher with each checkpoint.”

Asked if they had navigated with maps, compasses, dividers and parallel rules before, Laurie laughed and said, “No, we’re GPS girls!”

Yet they’re not off-road newbies. Laurie noted that she and her husband, Dirk, are active members of the Arizona Land Rover Owners. The Van Dyke and Jongert couples made the decision to enter the Rally while sitting around a campfire at the North Rim of the Grand Canyon. Pam noted, “My family and friends were very excited for me to enter the event. It’s really out of my comfort zone, but they gave me the confidence to tackle it!”

Marty Hopkins, Austin, TX, and her stepmother, Pixie Hopkins, an oncology nurse from Lovington, NM, competed in Marty’s ‘06 LR3 purchased for her as a law school graduation gift in 2007. It’s totally stock, so at the Tech Inspection the organizers made it eligible for the “Bone Stock” award at the end of the competition.

“I was really nervous on this first day,” Marty said. “We drew the #2 starting position. We had no time to do any plotting with a 6:30 start, but we were totally stoked!” They did well on this first day, finding each of the checkpoints and earning a score of 94%. Navigator Pixie said, “I’ve never used a map this way; if I ever looked at a map, it was on a navigation screen.”

Team 101 came together when Marty saw Twitter posts about the event. Her partner, Chelsea, urged her to enter, and Marty said, “The only crazy person I thought of was Pixie!” Turns out the two had spent a lot of time together running sand dunes in New Mexico.

Pixie Hopkins summed up her reaction to the first day, noting, “I’ve never been around so many independent, strong women in one place.” Six days off-road will bring more excitement for all the competitors; look for full coverage in the next issue of Rovers Magazine.