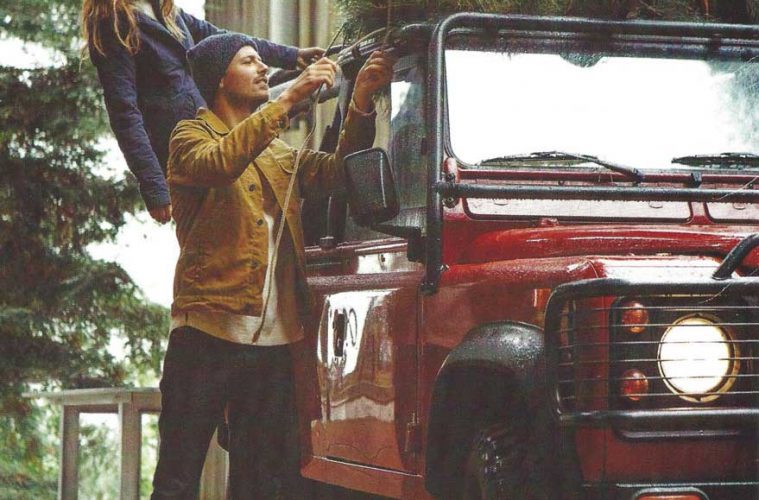 The calendar claims that spring has arrived, but a glance outside belies that. We don’t think that we should spot snowflakes falling nor ice still covering lakes and ponds in April, but that’s what we’ve been witnessing in New England. And it’s not just here, but throughout the country, winter has been pushing back the usual signs of spring. Once again, we thank the large number of enthusiasts who search out Land Rovers used in advertisements, commercials, movies and online sites.

It’s always helpful for veteran and novice Sighters alike to review the rules that govern when we award a Coveted Mug:
Rule #1 – All Sightings receive recognition and our appreciation, but not necessarily a mug. We reward only those Sightings that capture the unique qualities of Land Rovers and display them in a distinctive way.

Rule #6 – Psst… Email submissions — remember we can’t send a mug by email. Send us your real name and shipping address, too. 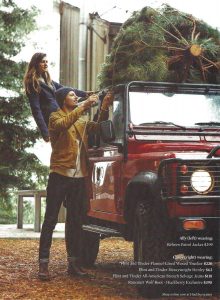 This past winter certainly enticed advertisers’ awareness of Land Rovers. Pax Whitfield, Astoria, NY and Lilly Perkins, Buxton, ME, couldn’t miss the prominent Discovery 1 on the AAA Northeast promotional magazine. Magazine articles often feature Land Rovers as they’re so interesting. William Hutchings, Wilmington, NC, noted an article on “The Legend” — with a Series I in the photo — in Maxim. Daysee Swant, Helena, MT, noted a Series II-A in a 1968 equestrian viewing piece in People. Paul Hai [See Rule #6] spotted a Land Rover in a photograph accompanying a New York Times article on Gaza. Jerry Staar, Burnaby, BC, found a 1983 issue of Vogue at his grandmother’s house in the south of France. An article in French Vogue on “Les Voitures des Charmes,” noted that one socialite’s Series Land Rover station wagon, complete with chains, “lives at her Swiss chalet. In the summer, it crosses through fields.” 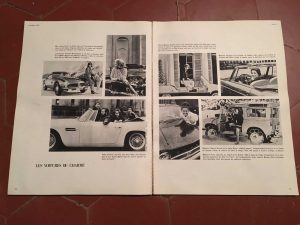 Keith Barrett, Plainfield, ON, wrote that AC/DC is not his usual musical cup of tea, but he enjoyed seeing the Series III in their video of “Cover Me in Oil”. Michael Zimmerman, Portland, OR, has a 13-year-old daughter obsessed with Korean K-pop. “While being subjected to yet another video,” he noticed the singer Blackpink performing on the bonnet of a Series III. Video game designers love the iconic look of Land Rovers. Jason Sheehy, Mt. Sterling, OH, found it comforting that youth are served the sight of a Defender 90 RHD pickup in a “Round the World” Shawn Mendes music video. Derek Chace, Charlotte, VT, noted that the Rising Storm 2, Vietnam Bush Ranger edition, features military Land Rovers. Rob Lynch, Apex, NC, noted the mobile version of the game Street Fighter 2 features what looks to be a Series III. Eric Owen, Albuquerque, NM, noted a Defender with UK plates on a Facebook page about solar panels. 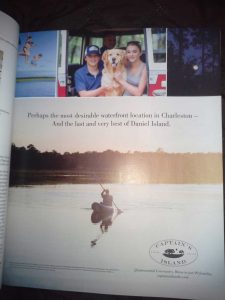 Retailers adore the appeal of Land Rovers in their catalogues and websites. For some reason, Pat Parsons, Honolulu, HI, was looking at the winter wear in the latest Matador catalogue when he spotted a Land Rover 110 in the layouts. Even real estate brokers find Land Rovers appealing; Gary Fletcher, Deep Gap, NC, noted an ad for Captain’s Island real estate in Garden and Gun magazine. Sara Neal, Lakewood Village, TX, and Peter Kapuranis, Aurora, CO, spotted the Land Rover in the latest Yeti ad. William Hutchings, Wilmington, NC, found the early Land Rover 90 in a Nikon Watch ad, and a Land Rover in the Roarke catalogue. Charles Joerss, Larchmont, NY, enjoyed seeing the Defender 110 in a winter setting on the Gear Patrol website. Brian Jones [See Rule #6] noted that the Mission Workshop website featured a Defender 90 to help sell a long sleeve shirt. Ron Dade, Washington, DC, noted that AutoWeek used a Defender 110 in Iceland as a come on for a magazine subscription [odd because he already subscribes to it!] 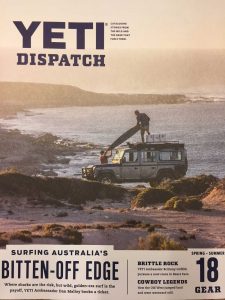 When Joseph Powell, Mt. Olive, AL, sought an auto carrier for the canine member of his family, he spotted a Discovery 1 in the Gunner Kennel catalogue. Nicholle Kvocka, New Port Richey, FL, spotted the Land Rover in a Sig Sauer ad, as well as a Land Rover 6-wheel Kahn body kit on a website. Joe Pacheco, Celebration, FL, loved seeing the rear of a Discovery 2 on the cover of the Pep Boys Flyer. Brandon Bradshaw, Morrison, CO, found a Defender front end on a Mavic drone ad that ran on Spotify. Skyler Neibaur, Flower Mound, TX, spotted the Land Rover 90 in a Reliant Powdercoating ad, “while checking the weather.” Bo Prillaman, Vero Beach, FL, noted that a Land Rover had a one-second moment on a Microsoft AI commercial, another one second moment in the premier of the TV show Goblin Works, and an early 110 on the British crime show Death in Paradise.