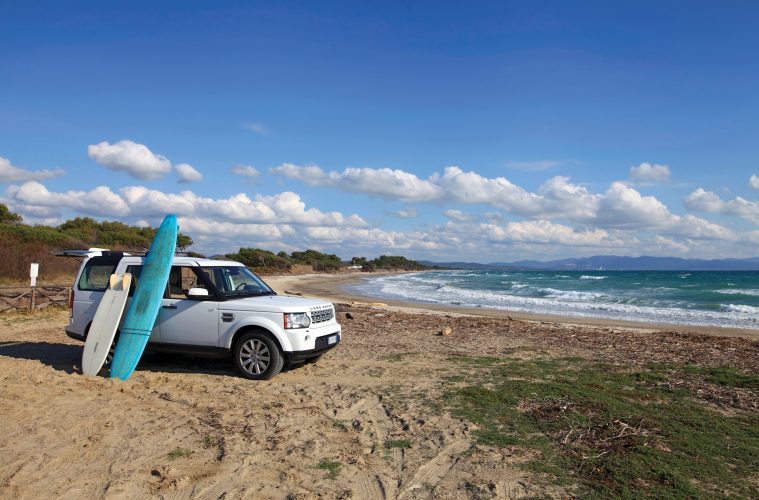 Italy deserves acclaim for some of the world’s most famous wines, but its spectacular surf beaches should receive recognition, too. The movie, Bella Vita, captured beautiful images of the Italian coast’s magical locales. The film’s producer, Piergiorgio Castellani, is not only an experienced winemaker and surfer, but a proud owner of a Discovery 4 who uses it daily for work and pleasure. 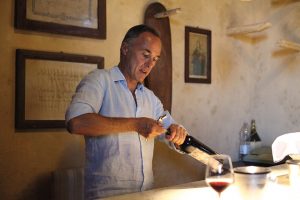 I asked him about his selection of the Discovery [LR4 in the US]. He said, “The Discovery 4 came after a wonderful Freelander that I drove for a few years and sold with some regret. The rear opening window of the Freelander allowed me to have a perfect air circulation, a great feature for those like me who cannot stand air conditioning.”

“I looked at Defenders and Range Rovers, but I took a chance on this one as it was a great used car at an exceptional price. Honestly, it was not a love at first sight; I still missed my Freelander, but I had to make a rational choice. The 2010 Discovery 4 seemed the perfect car for my jobs and my passions; over time it has exceeded my expectations.” 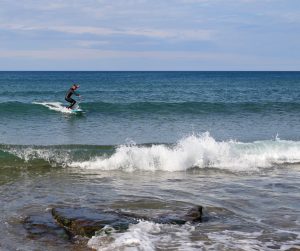 As he spoke of his passions, I asked Piergiorgio about his start as a surfer. “At age 17, when walking a beach on a late summer afternoon, I watched my friends surfing in the hazy glow of the sunset. I didn’t know anything about surfing, but I asked them to try out a shortboard. Fifteen years later, I was on holiday with my wife and children. The sea was stormy and in a flash of inspiration, images of that summer afternoon suddenly rushed back into my memory. The very next day, I bought my first surfboard and decided to become a surfer.”

“I drive my Discovery every day from early morning to night, and I’m quite happy with it. I push it to its limits and make very practical use of it. I’m not fussy about the bodywork and the Discovery just seems to want to work. From off-road in the vineyards to climbing on the rocks, to a little bit of ‘street-racing,’ it’s been perfect. I give it a quick wash and turn it into a representative car for company visits. Can I ask for anything better?” 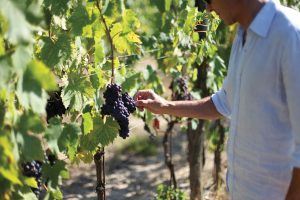 “I’m not an automobile expert, but I don’t think anything like the Discovery exists in Europe. Living and working in the countryside, I have no parking problems and the size of Discovery, for me, is not a problem, but a great advantage. Through my winery’s exports to the United States, I know many Americans who consider the Discovery a medium-sized vehicle, the best compromise between the spaciousness typical of US-made vehicles and the European style.”

“I know I’m not alone in finding the Discovery the perfect vehicle for surfing. My friend, Jason Baffa, the legendary Californian director of One California Day and the Bella Vita (two cult movies of free surfing), drives an old, light green Discovery, perfect for transporting longboards up to four meters long. Our collaboration led to us creating Zio Baffa, a line of organic wines inspired by our surfing adventures.” 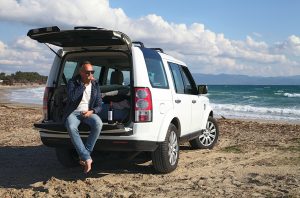 Piergiorgio’s family business, Castellani Wines, has created wines from estates in Tuscany since 1903. Today it produces some 30 million bottles annually, mixing contemporary technology for production and marketing with centuries-old agriculture techniques. “The Discovery is the ideal car for a ‘wine safari’ with guests who visit my vineyards in the Pisan hills, during which I always make an exciting off-road experience happen! Also, the Discovery can comfortably accommodate four surfers and up to two boards for each surfer, plus luggage and all the necessary gear. When alone I can drive it onto a ferry, sleep in it, and then wake up on the shore and not be tied to a campground. Sardinia and the south of France are probably the places where I have most enjoyed traveling in the Discovery.” 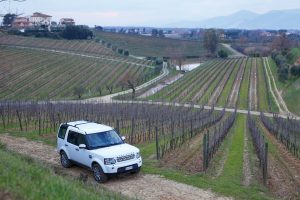 Like avid surfers everywhere, when the waves call, Piergiorgio just turns off his phone and drives to the beach. “If I leave the office for two hours, I will make up those two hours later in the day. I think making wine and surfing are connected by the inevitability of natural events. Nature rules in both situations. Those who work in agriculture know that a year’s work can be destroyed overnight and more importantly, they know how to deal with that.” 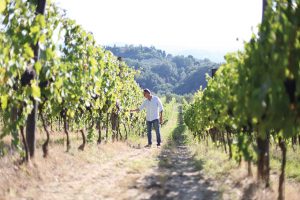 “Tuscany has one of the best coastlines in Italy. It’s exposed to the swells of the Mediterranean. For many years I practiced longboard and the classic style on the beach break and the coast of Versilia, near Pisa. Since I started surfing with my son, Giacomo, who’s 15 and already a great surfer, I began to appreciate the waves of southern Livorno, which is better for shortboards. As for the rest of Italy, West Sardinia and Liguria bays offer some of the best waves. Many surfers dream of exotic destinations and boat-trips in the Pacific islands, but I think in Italy we have a precious treasure a few nautical miles away from the mainland. Sardinia is an island with hundreds of miles of stunning coastline exposed to swells from every direction. It’s still largely unexplored, just waiting for the surf culture to develop around it.”

The connection between surf and soil bonds Piergiorgio with his twin passions. “Surfers know that waves are a beautiful and potentially cruel manifestation of nature. Those who face them learn how to respect them and accept their rhythm. This knowledge puts a man in touch with something much larger and more encompassing than him. Ultimately, knowledge of nature forces a man to become humble and responsive to the call of Mother Nature. The best wine comes from the best grapes, which are the result of the minimal human intervention on the natural rhythms of the vineyard. Each harvest is unique, the same as waves: each one is always different.”