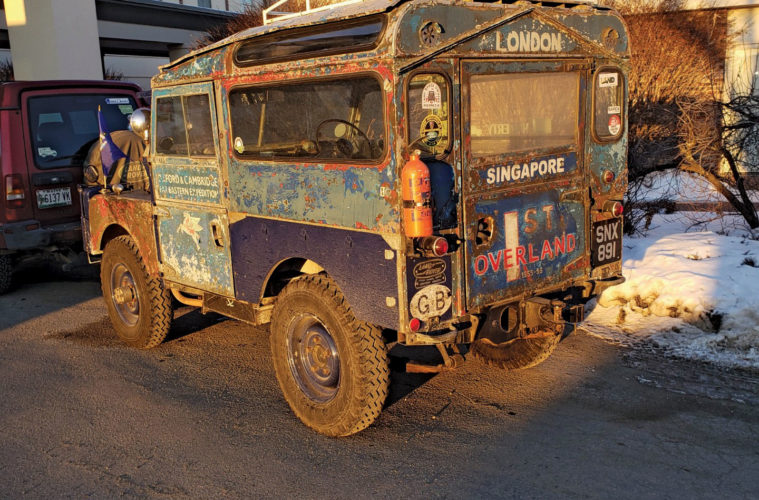 I am the happy owner of an ’88 Land Rover 110 County Station Wagon, and my family’s Land Rovers include an ’03 Discovery and a ’17 Discovery Sport. My past Land Rovers were two ’95 Range Rover Classics and a ’10 LR4.

We could not be the Land Rover family we are without the tremendous assistance of Travis Hightower at Rovers North. He has always been extremely knowledgeable, friendly and helpful. We’ve never met in person, but we want you to know how much we appreciate his assistance to our Land Rover family.

[Thank you for your complimentary remarks. The Sales Techs at Rovers North take great pride in their work, and thoroughly enjoy connecting daily with Land Rover enthusiasts worldwide -ed.]

Our Westie really liked riding in our Defender 90 at the Maine Winter Romp! We also have a Series III and a ’96 Discovery I, being kitted-out at Matt Browne’s Overland Engineering for more aggressive off-roading. I really enjoy reading Rovers Magazine, and wish I were able to get it regularly.

[Rovers Magazine is sent as a service of Rovers North to active customers (see Table of Contents page for more detail). Thank you for your compliments on the magazine! -ed.]

My wife Angela and I had a terrific time at the 2019 Mid Atlantic Rally. No breakdowns, no vehicle issues. What a change from the 2018 MAR.

I live about a six-hour drive from the MAR site. On I-81, near Blacksburg, VA, my alternator stopped working and my ’01 Discovery II began to overheat, so I knew I had a serpentine belt issue. Opening the hood, I found the belt shredded and gone and the idler pulley was seized; mud had worked its way into the bearing. During the four hours we sat in a rest area, nine different ROAV members stopped to lend a hand. One fellow, Andrew Thompson, drove out of his way (with two kids in the car) to find an auto parts store. He returned two hours later with the belt and an idler pulley and helped me install them so we could get on our way.

None of these folks knew me, but they stopped to help another Land Rover wore. This shows what a great group we have!

[What a fitting tribute to the MAR Land Rover community! -ed.]

I just bought my first Land Rover, a ’71 Series IIA, which is now on its road to rebirth.

[Congratulations on your first Land Rover. You know you can’t just have one, right? As you can see from the above letter, you’re entering an amazing community of enthusiasts -ed.]

The Rover Owners Association of Virginia is proud to announce the official arrival of the Oxford Rover North American Tour. This Series I participated in the 1955-56 Oxford and Cambridge Far Eastern Expedition and remained a working vehicle on Ascension Island in the South Atlantic. Enthusiast Adam Bennett, York, England, purchased the truck and refurbished it in 2017. His goal is to have it visit all seven continents, starting here in North America.

It made its first appearance at the Annual Meeting of ROAV in Richmond, VA, and received needed mechanical attention from Sarek Autowerke, which brought it up to the Maine Winter Romp in February. We hope that enthusiasts around the US and Canada can enjoy this piece of history during 2020.

[Congratulations on ROAV’s adoption of this exciting effort. If your club or event is interested in hosting the Oxford Rover, contact admin@roav.org for more information -ed.]

I’m always interested in the personalities of those who own Land Rovers. Turns out that Fidel Castro had one, which besides the Queen and Winston Churchill, would make him one of the more famous owners. His was one of 37 Station Wagons sent to Cuba. I’ve tried to get the serial number for the Cuban government, but to no avail. Reportedly, Castro’s Land Rover was fantastically useful in the mountains when he was fight Fulgencio Batista. And the color! Where did the restoration shop get that paint?

[Great find, Dixon! If only the guards would have let you get closer -ed.]