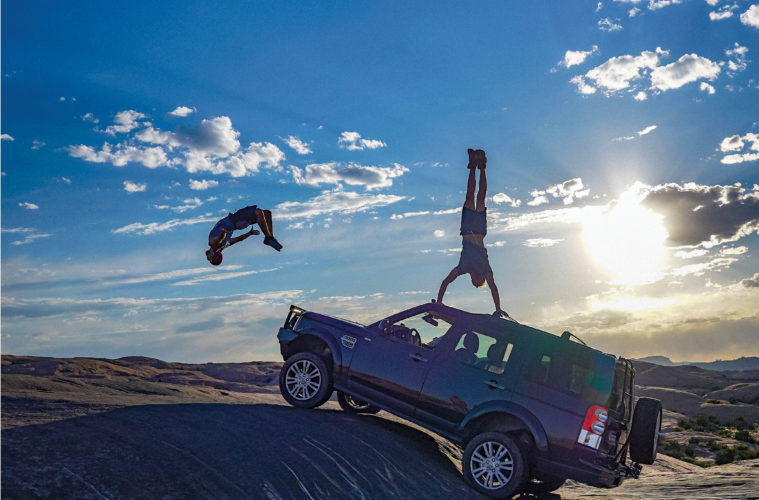 “Trust us,” said American Ninja Warrior Travis Brewer and his partner, Leah Russell, as they lured me into trying a seemingly impossible gymnastic maneuver.

Off-roading teaches you about trust. In difficult terrain, you’re often working with a spotter. Developing trust in that person’s hand signals gets you through the sticky moments, without damage to your Land Rover.

Travis and Leah exuded confidence and experience. I hesitated for a moment, but then Travis started to speak about his LR4. Oh, well, if they’re Land Rover enthusiasts. I took the leap of faith and the next thing I knew, I became a Ninja novice, sort of.

If you need more proof that Land Rovers attract interesting people, Travis and his team provide additional evidence. A viewer of American Ninja Warriors a decade ago would have seen Travis compete during Seasons 5-8. “It was a great experience,” he said. “I was grateful to be to be a finalist on the show. When you hear that final buzzer, it’s wondrous. When you’ve done all the training, then you get to live in the moment and just in that moment.”

A native of Houston, TX, Travis grew up playing sports. “At age 2, I was climbing on a roof. I chose gymnastics, worked my way onto a local competition team and placed 4th in the state at one point. In middle and high school, I added football, track and soccer, playing on a champion soccer club team. Then I blew out my ACL when at college at the University of Arizona.” He would later take an MBA at Pepperdine University in Social Entrepreneurship.

“I took a job in commercial real estate, but in 2008, the job ended during the recession. I found the time to travel, and lived in Indonesia and Australia, living out of a Defender 110. When I returned, my mother made me focus on what I really wanted to do, which I realized was a combination of fitness, entertainment and fashion.”

“I knew nothing of the Ninja Warrior show, but a friend and I worked out together on Venice’s Muscle Beach, and I wound up as a successful contestant!” Travis would also appear on Shark Tank, promoting a friend’s product.

His affection for Land Rovers started during college. “I had a Range Rover Stormer poster on my wall! I enjoy well-built machines. In my dream world, I would have a sports car and a Land Rover. My ’06 Range Rover Sport combined the two. It was sexy, fast and great off-road — a perfect lifestyle car that got me to Joshua Tree as well as through Hollywood.”

When he wanted something with more utility, a ’12 LR4 became the answer to the multiplicity of his entrepreneurial activities. Now, with 80,000 miles on it, the LR4 makes it possible to travel to perform at events, camp and practice in the deserts reaches of California and Nevada.

Travis founded Pi Movement, a clothing and lifestyle brand for acrobatics, yoga and everyday life. Through the company, Travis seeks to create “a positive impact through movement.” As indicated by its name, “Pi,” the company gives back 3.14% of its profits to create movement parks under his mantra, “never stop playing”. At age 38, he’s not stopped.

Just as he did at the 4XFAR Festival in Palm Springs, CA, last January, Travis would love to bring his team to Land Rover off-road events to enable other enthusiasts to join the fun. “I want to help raise the consciousness of joy in the world.”

“Movement is medicine. It keeps me young,” said 27-year-old Leah Russell, Travis’ partner in Venice, CA. She’s the rare Californian who’s a native; born in Riverside, she grew up in Birmingham, AL, until her family moved back to California. “I was an outdoor girl, really a tomboy, enjoying mudding and off-roading with the ‘good-old boys.’ Only a couple of them had Land Rovers; who knew I’d wind up off-roading with a Range Rover owner!”

After graduating from the Art Institute of California – Orange County, Leah spent seven years designing residential and hospitality properties and then moved into furniture design. She discovered the movement community when she spent eight weeks traveling while working on a documentary film about the life of Zen philosopher Alan Watts. “The film was a turning point for me,” she explained, “It planted the seed within me to take my creativity into movement, teaching and performing.”

Leah’s movement talents quickly become evident. She’s also taking her design skills into gym and fitness space planning and layouts, as well as adding fitness apparel designs for the women’s line of Pi Movement. After a pause in the interview, Leah reflected, “It’s such a blessing to be a ‘true-life superhero’ in the eyes of children watching us perform. We get to connect with them on a deeper level, which is really inspiring.”

Andreas Alfaro, Los Angeles, CA, has lived a cosmopolitan life. His family roots are in San Jose del Cabo, Mexico, on the Baja Peninsula. Andreas was born in El Paso, TX, but his family moved on to Monaco, France and Italy before returning to the USA. He finished high school in Miami, FL, and graduated from Baruch College in New York City with degrees in International Business and French.

In Europe, he competed as an elite gymnast for eight years, training under the tutelage of a French Olympic competitor, and became a member of Monaco’s National Team. He met Travis Brewer and entered the ninja community on the Santa Monica Beach. With Travis as his coach, Andreas plans on competing in future American Ninja Warrior competitions; he’s also developing

“Land Rovers have been a part of my life,” Andreas said. “Most of my relatives had Land Rovers and of course, I saw them all over Europe. Since meeting up with Travis, he’s reminded me what they can do off-road.”

Natalie Duran grew up in the hot rod and car culture town of Riverside, CA. She’s a first generation Asian-American; her family emigrated from the Philippines. “My mother was smart little cookie,” said Natalie. “As a nurse, she and my father raised me in a high-expectation manner. I never got out much; didn’t even drive until I was 18.” Natalie graduated from UC-Riverside with a degree in neuroscience.

“The beginning of my ninja life was the sport of rock climbing. I would go every weekend and found it so exciting. In climbing gyms, you reach up, pull down, and step up to your next point. In the outdoors, you’re pushing out and up, learning how to maneuver yourself and develop a flow. Once I gained confidence, I learned that I could be in complete control of my movement. This was critical, as the majority of climbing is developing trust and confidence.”

So, too, does off-roading depend on trust and confidence, in yourself as well as in your compatriot.