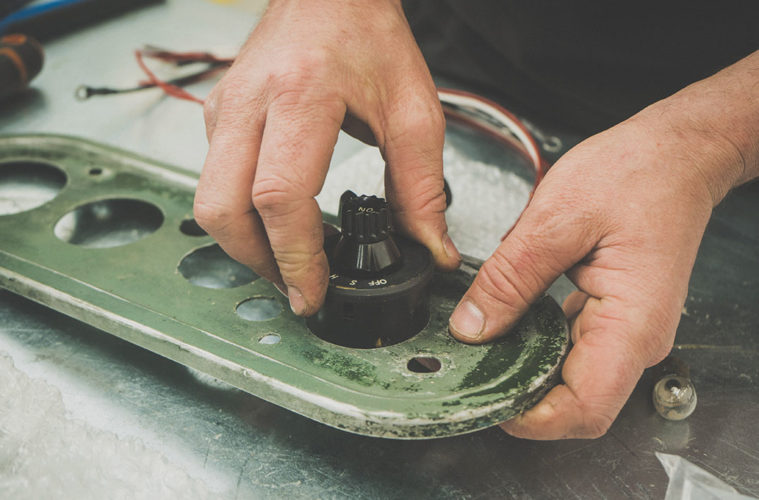 If you’re reading this magazine, you consider yourself a Land Rover enthusiast, but most of us would pale in comparison with Mike Bishop.

Growing up in Melbourne, Australia, he fell in love with Land Rovers, especially the earliest ones that we now call Series I’s. Little did he know that he would progress from hunting down barn finds in Australia to heading up Series I restorations for Jaguar Land Rover Classic in England.

If you’re a Series I enthusiast — the earlier the better — then you really want to meet Mike. In addition to being gregarious and unpretentious, his knowledge about the first Land Rovers seems encyclopedic. We met at the 4XFAR Festival, where he accompanied and oversaw the many historic Land Rovers on display.

As a teenager in the late 1980s, Mike took on a newspaper delivery route. That’s when he realized just how many early Land Rovers came up for sale. He bought his first Series I at age 14, a 1950 model. He might well have been the youngest member of the Land Rover Owners Club of Victoria. “As a kid, I would ride my bicycle to the local Land Rover dealer and pester the part guys for line drawings on the earliest Land Rovers,” Mike recalled. “That’s when I realized I had a very original one.”

In an era of restrictive trade practices, Land Rover found itself threatened by high tariffs on vehicles imported into counties, inside and outside of the British Commonwealth. As with other manufacturers, their answer was to produce Completely Knocked Down vehicles [CKD] which would be assembled locally, and which might often include locally-sourced parts (window glass, tires, and some unique options), thus skirting otherwise crippling tariffs. Australia’s vast size meant that some internal markets received the CKD kits, while others could import Land Rovers directly from Solihull. All in all, some 27,000, 8-inch Series I’s wound up in Australia.

Mike dug deep to research the myriad of Series I’s that came into his country, accumulating a large collection of early sales brochures, factory service bulletins, owners’ manuals, advertisements and photos. At age 16, he wrote articles on the Series I’s for the Victoria Club. By age 20, he had not only completed the rebuild on his first Series I and acquired a 1950 mobile welder model, but he even purchased one from the first year of production, a 1948 model.

He also joined the UK’s Land Rover Register, the international club for enthusiasts of the 1948-53 models. Not long afterwards his expertise and knowledge enabled him to contribute articles to their magazine, Full Grille. His attention to detail led him to realize that much of the history of these Land Rovers resided in fading memories rather than clear documentation. In the ’90s, Mike worked with university faculty who had created one of the earlier websites devoted to Land Rover history; his 1994 monograph on the changes between the pre-production prototypes and the first 80” proved quite popular.

His degrees and work experience in marketing and event planning would lead him to work with the Land Rover Experience; or as he called it, “event planning with Land Rovers!” As Land Rover’s 50th anniversary approached in 1998, Mike found himself sent to the UK where he helped prepare Land Rover #16 off the 1948 production line for the massive celebration. At that moment, his stars aligned for his future. Mike’s wife, Michelle, a genomics specialist, had been offered a permanent position in the UK, and the owner of #16 offered it for sale to him. “I see the vehicle as yours,” he told Mike, “as you built it up. Make me an offer!”

Mike recalled thinking, “I’ve got to try this at least once. Number 16 spent its life at Solihull, so I decided to purchase it. When I took it to a few UK events that year, people were delighted to see it and wanted to know more. I knew I had to research it, so while I was in there, I stopped at the British Motor Museum at Gaydon and requested a photo of it at the factory. The helpful researcher was skeptical and she suggested that I speak with Roger Crathorne — generally accepted to this day as ‘Mr. Land Rover’. Not long afterwards, Roger marched into the museum and I asked him if he knew anything about the Land Rover. He was stunned — he recognized the license plate (trade plate 260 AC), knew the color (blue with a white hardtop) and told me it was the first Land Rover he had driven as an apprentice with the company. He could even describe the unusual wear on the clutch pedal, which remains to this day!”

Mike accompanied #16 and the heralded HUE166 to a commemorative filming and by then recognized that he had to find a way to work at Land Rover UK. When he approached them, Land Rover said, “We need a backup for Roger,” and offered him a position.

He never lost his Australian enthusiast contacts, one of which resulted in “stumbling onto” a former Land Rover engineer, then living and working in Brisbane. By the mid-2000s, most enthusiasts know of engineers and designers such as Maurice and Spencer Wilks, Gordon Bashford, Tom Barton and Charles “Spen” King, but Mike sensed that he had missed stories of the many other people who made the Land Rover possible. Sure enough, a friend, Alex Massey in Brisbane, came across a man in his 80s who had worked at the Rover Car Company from 1944-57, and as the assistant chief engineer, his information would prove to be “pure Land Rover gold.”

By 2011, Arthur Goddard’s memory and personal treasure trove of printed material would become the basis for additional articles and Mike’s extraordinary book, They Found Our Engineer: The Story of Arthur Goddard, the Land Rover’s First Engineer. The transcript of a long conversation between Goddard and Spen King (who would help create the Range Rover, the Rover SD1 and Triumph TR7) will captivate any Land Rover enthusiast. Not only is Mike a tenacious researcher, but a skilled storyteller.

Nine years later, Mike finds himself as the Land Rover Product Specialist at Jaguar Land Rover Classic. This operation specializes in the restoration of heritage Land Rovers, especially the Series I’s, as well as the first Range Rover models. He still owns his Series I’s and his son, Samuel, age 6, “is curious about cars and our Series I’s are the perfect introduction.”

When JLR sought to bring a lineup of heritage vehicles for the 4XFAR Festival in California, they turned to Mike to determine the best vehicles to represent the marque, and also flew him over share his knowledge and stories with the thousands who attended each day. “Events like that are very special,” Mike said. “I love traveling and meeting people from all over the world.”