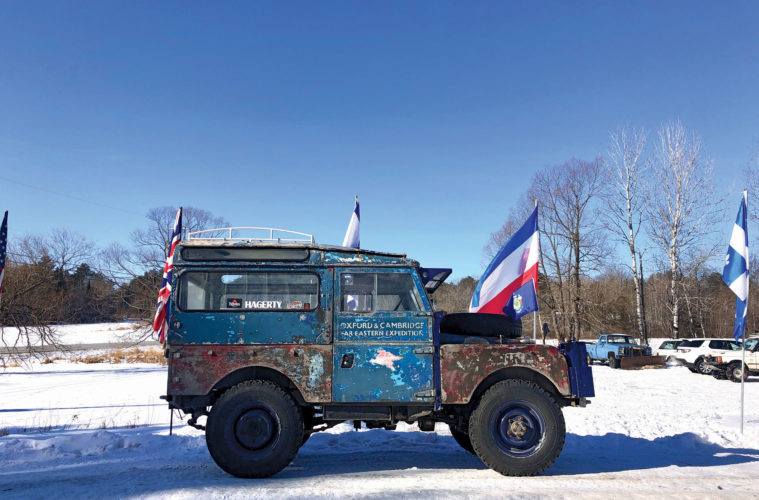 Return with me now to those halcyon days of last February, before the Covid-19 pandemic upended our lives. Back then, the Maine Winter Romp presented me with my greatest challenge. To paraphrase Shakespeare, “Whether twas nobler to suffer the slings and arrows of food and drink or take arms against the muck and mire.” We’ve done the muck and mire. We chose the food and drink.

My friend Mike Wilson and I drove from our homes in New York and Vermont, respectively, to Maine on the Friday morning of the event. We spent that first night catching up with five other friends at the house of John Vallerand, Greene, ME. His homemade chili and extensive beverage selection hit the spot. At 6:00 am the next morning, we packed ourselves and our belongings into three vehicles; Mike Capozza’s ‘60 109” pickup, John Vallerand’s early 90’s Defender 130, and for comfort, John Dankawicz’s ‘08 Range Rover HSE.

We set off for Big G’s Diner in nearby Winslow, ME. Winter Romp is as much about the people as it is about the Land Rovers. Arriving at Big G’s on the Saturday of Romp drove that point home. Most attendees stop here as many haven’t seen each other for the entire year. The Big G’s detour serves as a min- homecoming site while serving up the biggest breakfasts and largest lunch sandwiches – at very reasonable prices.

Fueled up with friendship and food, we arrived 30 minutes later at the staging area, the fields surrounding the house of organizer Bruce Fowler. An impressive spectacle unfolded before my eyes – Land Rovers of every vintage, from early Series I’s to modern Range Rovers.  The 220 registered Land Rovers made it the largest-ever Winter Romp.

As usual at Winter Romp, the fulsome breakfasts, hot beverages and camaraderie could not overcome the bon-chilling temperatures that greeted us. How cold was it? We actually chose to sit inside a Defender huddled around the heater vents. The sight of hundred of Land Rovers, including the famous Oxford London-Singapore Series I, warmed the soul but not the body.

The assemblage broke into smaller groups who then began to run the spider web of trails the wove through the fields and forests covering hundreds of acres. My small groups reiterated that we wouldn’t do any crazy off-roading this year but would hold to our original plan for a social day. We had packed a full-sized grill, a folding table, and a bounty of food. Our plan was to set up camp in proximity to a large warming tent, which this year housed volunteers raising funds for the Waterville-area Habitat for Humanity. We knew that the trail maps (thank you, Peter Vollers and volunteers) would encourage attendees to gather in that area for lunch and coffee breaks. It would provide the perfect spot to ogle the Land Rovers and mingle with other enthusiasts.

By the time we departed Bruce’s house, our group had grown to five Land Rovers; we picked up a Defender 90 and a beautifully modified Series II.

Each of us had participated in Winter Romp before, so each of us assumed the other knew the way to our forest destination. We even went so far as to confirm our assumptions with some folks who looked like they knew the lay of the land.

“This is the way to the warming hut, right?”

That exchange lacked accuracy and veracity. Thus began our unintended, three hours of off-roading in the middle of winter – with no recovery gear.

Their inaccurate directions guided up the hill and then through a set of S-curves through small birch trees. Given its length and wide turning circle, our lead 130 encountered numerous problems navigating tight obstacles, especially when the slick, snowy ground sloped to the side. For fear of wrapping the 130 around several trees, we had no choice but to move forward. We continued up the tight, hilly trails with the four other trucks following close behind. At various points, all of us took turns get out of our Land Rovers, coaching and spotting one vehicle at a time as each ascended the many terraces of the trails.

Just when we thought we should be approaching the warming hut clearing we drove up to the tail end of a stalled lineup of Land Rovers. When it seemed that we were finally in the clear, we approached the tail of the group ahead of us. Once again, we all piled out and walked ahead in search of the cause of the traffic jam. Ahead we stared a 12-ft long, 3-foot deep pit filled with slush and ice floes. Getting into the pit – easy – but getting out the other side, that was difficult. Some Land Rovers made it through without much help, but most required a tug from the other side.

One enthusiast from the convoy made his way through the pit and turned around, facing the crossing so his winch could hook up to a stuck vehicle. Some Land Rovers fetched up on the ice floes being thrown around by the riled-up waters, others made it through, their wakes resembling power boats churning up the waters.

Finally, we drove all five of our Land Rovers through and soon after, reached our destination. The cooking commenced, and the sight of the large grill acted like a beacon, drawing attention along with the wafting odors of delicious food. The day went on with chatter and catching up in the freezing cold of the woods, until sunset. We departed the woods and eventually drove back to the event hotel in Waterville. The whole party reconvened at the bar, reliving the day and assuring that we would all return for next year’s Winter Romp.

Little did we know then that Winter Romp would be the last major East Coast event for 2020!

Bruce Fowler, Unity, ME, founded the Maine Winter Romp in 1996, sharing his property along with that of friendly neighbors. That same year, conservationists in the UK created the concept of “Millennium Greens” — open land for a wide variety of uses by local communities. By 2000, nearly 250 had been created.

The concept appealed to Bruce so much, that when a private land sale threatened the continuation of the Maine Winter Romp, Bruce took a deep breath and agreed to purchase the property to create a “Winter Romp Millennium Green”. In honor of Bruce’s decades-long generosity as the host of the event, long-time attendee Peter Vollers, Woodstock, VT, stepped in and created a GoFundMe campaign to cover the purchase cost. Over 200 donors came forward to cover and exceed the $40,000 goal.

Working with key volunteers within the Winter Romp community, Bruce plans to move from concept to reality. The “Winter Romp Millennium Green” be held in a trust and open to all for camping and outdoor enjoyment.

Winter Romp attendance has grown from less than a dozen Land Rovers in 1996, to over 220 in 2020; more attendees means the need for more land access. Fortunately, when an adjacent parcel became available, enthusiasts Bill and Patty Cooper, Blairstown, NJ, purchased a critical 47 acres.

The combination of Bruce Fowler’s bigheartedness (no charge for the event, no commercial sponsorship accepted) and volunteer generosity — in labor and contributions — should ensure the event’s continued growth and success.

David and Amanda Murrell, Charleston, SC and Southwest Harbor, ME, have raised their children, Davis (14) and Charlie (12) well. They’ve been conveyed in a variety of Land Rovers: an ’04 Discovery II, two ’06 Range Rover Sports, and a Defender 110.

For this year’s Maine Winter Romp, David and Charlie came up to Maine to fire up “Hyacinth,” their ’66 Series IIA hardtop, to drive it at the event. This time, Charlie took the wheel for his first off-road drive.

In an interview Charlie told me, “It was my first time driving the Series IIA. It was fun, but scary at the same time. I found it fun because I got to control the car all by myself. I found it scary because it was my first time ever and because I didn’t want to get stuck.” [Don’t be afraid, Charlie. Everyone gets stuck sometimes -ed.] “Even in low range, it was hard to learn how to use the clutch and shift gears.”

“I drove for about 15 minutes, and although the steering required a lot of strength, the whole drive was really, really fun. I would like to do it again next year.”

Charlie admits that his favorite Land Rover is still the yet-unnamed Defender 110, with its Td5 engine. “I’ve grown up with Land Rovers,” he explained, “but this is the coolest car to drive around town — and we can use it for off-roading!”