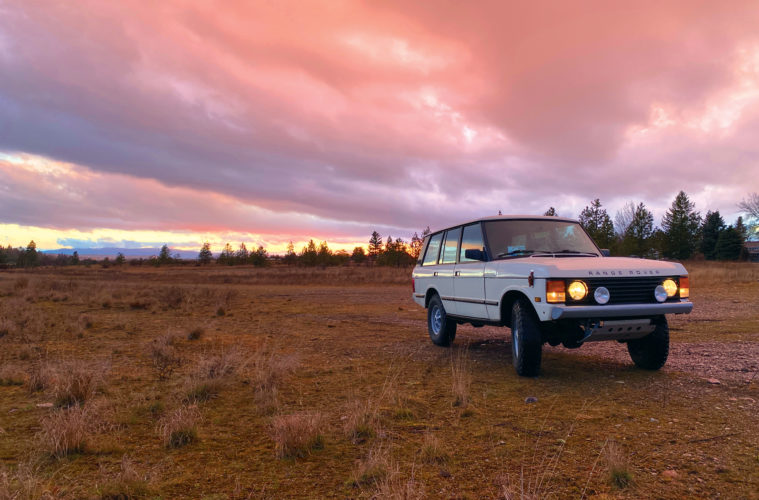 I first met Princess Ruby in Vancouver before the 2019 BC Overland Rally. I stopped by Rovalution, a highly-regarded Land Rover specialty shop. Don MacDonald founded the company and still turns a wrench often. He wanted to get some of their amazing builds to the event. Would I consider driving their ’90 Range Rover Classic to the rally?

I was elated for my first experience driving a Range Rover Classic, let alone one with a 5-speed I’ve probably never babied a Land Rover so much in my life as I did Ruby, when shifting through the gears as we climbed the mountains to Whistler. Yes, the weather was foggy and chilly, but as is usually the case, the views were absolutely stunning.

(If you’ve never attended a BC Overland Rally, I would certainly recommend it — but that’s an entirely different story.)

A year later, I discovered that Ruby remained available. I somehow got a wild hair; why not buy a dream Land Rover? In my opinion, Range Rover Classics belong in art museums — the Louvre actually exhibited one not long after its introduction. How can such a basic box captivate me so strongly? I knew I had to own one someday.

Fast forward to 2020 and Ruby is still on the market and I somehow got a wild idea. Why not purchase my dream Land Rover? Range Rover Classics are a work of art in my opinion. How can such a basic box also be so stunning? I knew I had to own one someday and while I’m single and without a husband to tell me I have too many Land Rovers, I decided to find out if I could purchase my first Range Rover Classic.

Ruby came into the US as one of 4,860 official importations. Her Chamonix White paint job looked original, but happily, she wore slender bumpers from an earlier time, as well as earlier-model bonnet. The leather bonnet straps looked like they had been swapped out from an Austin Healey. Most impressively, a 300 Tdi with a rebuilt R380 5-speed had replaced the stock 3.9L V-8 and ZF 4-speed automatic. Every undercarriage and exterior photo enticed me further to make this Range Rover mine.

I paused in my enthusiasm for a moment as I realized I live 1,500 miles away from the Range Rover. The previous owner acknowledged that he had not driven the Classic much over the past year. Hmmm, oh well, it would make for an entertaining trip and surely couldn’t turn out worse than my last major Land Rover adventure! [see Winter 2020 issue -ed.]

I convinced a friend, a mechanic, to join me on this excursion just in case of catastrophic failure.  Because we both had only the weekend off from work, we needed to complete the 1,500 miles journey had to be accomplished in two days. We would take a flight to the Classic and begin the drive back early Saturday morning. What could go wrong?

As we boarded the plane at Denver International Airport, I suffered pangs of buyer’s remorse. Did I have the correct paperwork? Was Ruby everything I imagined? Should I really be buying another Land Rover? (I convinced myself the last fear was baseless; one of my Land Rovers wasn’t usually running anyway!)

After an uneventful flight, we strolled through security. Since I don’t watch much news, I’d been blissfully unaware of the reduction in airline travel — no lines, hardly a soul in sight. We’d packed one bag with random tools, assorted car parts, sleeping bags and extra clothing in case the Classic broke down in some random, inaccessible location. Suddenly, I heard my name over the terminal loudspeaker. Had I done something wrong? No, the airline thought my tool and parts bag had not made the flight, but thank goodness, they found it. Imagine getting out of an airport in under 20 minutes!

In our taxi ride to purchase Ruby, my friend turned to me and asked, “Are you going to freak out when you see the Classic?” I protested, “Of course not,” but deep inside I felt as excited as a kid getting a bicycle for Christmas — one with streamers and a horn!

As we pulled into the parking lot of the restaurant, I saw the Range Rover standing tall over the line of Priuses, Corollas, and other such things. I lost it.

I became unbelievably excited, literally bouncing in the back of the cab (I’m a bit embarrassed to admit!) We loaded it up with suitcases and went for a quick bite to eat with the owner. He did his best to tell me all the quirks and give me a quick lesson (if you own any older Range or Land Rover, you know how this goes) before we started off on our trip.

After much debate, we had decided to take I-90 from Seattle across Washington, Idaho, Montana, and down into Wyoming, and eventually turn onto I-25 that would bring us straight into Denver. This route would be a little bit longer than taking I-80, but I had been assured that given the chance for bad weather, this would prove the best route.

As we headed out of Seattle, it began sprinkling, then raining, and then snowing. Good weather, really? In the Pacific Northwest, enthusiasts call this “par for the course.” Ruby climbed the hills like a champ! And I felt that having a manual gearbox gave me an edge when it came to some of the steeper grades. Modern cars shot by me, but I know they weren’t having as much fun! Somewhere about Spokane the sun came out for a while before disappearing around the next hill.

Living in Colorado much of my life I’m quite familiar with my beloved Rocky Mountains, but I hadn’t driven through the ones that traverse across Montana, Wyoming, and Idaho.  Unfortunately, much of the drive took place at night, so I missed much of what I’m told is amazing scenery through these spectacular mountains. But we had a deadline!

As we carried on, so did the wind and snow. In a modern car this really wouldn’t have been much of an issue. However, with the Classic’s sealed-beam headlight — maybe brighter than a candle — and windshield wipers that left much behind, my undying love for Ruby began to dip a bit. However, this is exactly what I had signed up for and although some might call me crazy, it wouldn’t be half the adventure in a 2020 model.

We returned to Denver, right on schedule, without a single mechanical problem! I’d invited a mechanic with me on this trip and didn’t need a single thing on a 1990 Range Rover Classic — I hope this kind of luck holds up!

Through all the snow and rain Ruby had kept us warm and dry. However, when I went to wash her after our return, I can’t even list the number of places I found water dripping on the inside.  I was relieved to know I had purchased an actual Range Rover. I would be worried otherwise! I think there will be many fun adventures in our future together, and perhaps some more long drives.