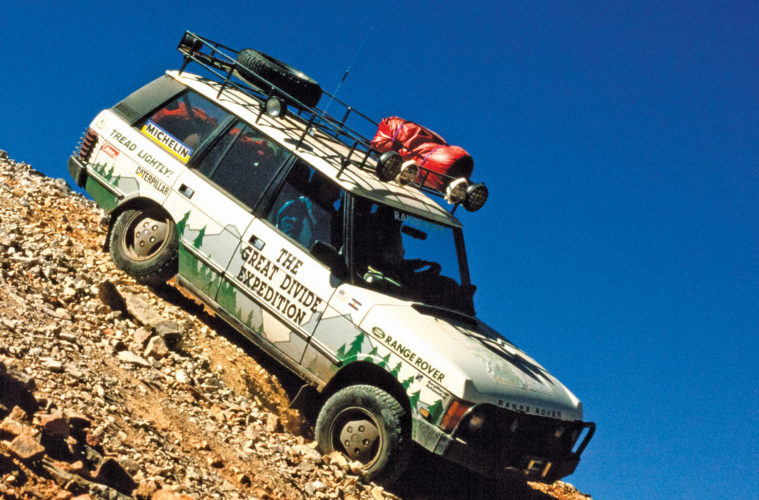 But it’s a Range Rover

The Range Rover, a vehicle first launched in 1970 with the US market in mind, did not formally arrive here until it was a teenager. Now that it’s celebrating its 50th, it’s amazing to assess the impact of this iconic vehicle on Uncle Sam.

I wasn’t much older than Range Rover when I started working at Range Rover of North America in 1986,  seeking to convince America that it needed a boxy, expensive 4×4, with a tiny V-8, a British Heritage, and something that no one thought a 4×4 even needed… luxury.

So how do you introduce what the Rest of the World knew to America? We are, after all, somewhat different.

To Americans in 1986, the Royals meant Princess Diana, or Camelot, or a nursery rhyme or Disney movie. Most Americans considered “discovering new places” as going to a new restaurant, maybe a new state, but not driving across the Okavango Delta.

Most Americans… well, didn’t attend the opera in anything (present company included).

Most Americans pulled a trailer with a one-ton dually, with a big block or a diesel. Most Americans moved people in Suburbans or Travelalls (now Expeditions, Escalades and Navigators). Many Americans had outboard motors or even their lawn tractor larger than the 215 cubic inches and 150hp of the first Range Rovers.

So here comes Range Rover, maybe the answer to the question that no one has asked. How do you appeal to the biggest auto market in the world? Keep it real. It fell to Range Rover North America’s small team — Charlie Hughes, Roger Ball, and Bill Baker — to tell America what was missing.

Step 1: Convince the US that this was truly the Best 4x4xFar.

I’d never encountered a more enthusiastic executive team. Most every meeting turned into an event that included off-road at some level. Every partner, supplier, vendor or guest to RRNA found themselves off-roading at some point. Even Royalty got their Louis Vuitton’s a bit dusty, if not muddy.

I came in as part of the PR team. As an engineering graduate of Northeastern University I knew as much about PR as America knew about the Range Rover. Little did I know that helping getting lunch time stuck Range Rovers unstuck would land me the job as head of off-road activities at Range Rover of North America.

Roger Ball, who had marketing as one of his many responsibilities, said, “You seem to not get stuck out here, so, um, ah, you’re in charge of off-road thingies.” And the title stuck, for a day or two anyway.

To create the aura that we now associate with Range Rover, we had to combine a British pride towards royalty and a British sense of luxury, with off-roading. We had to accomplish this without many Range Rovers to sell. Our monthly sales targets would have been rounding errors at my former employer, Chrysler.

Charlie Hughes and Roger Ball enlisted Grace & Rothschild, then a smaller Madison Avenue firm, as their advertising agency. Roy Grace and Diane Rothchild worked together at Doyle Dane Bernbach, the creators of iconic VW Beetle ads, which made fun of the Beetle while creating appeal and humor around its shortcomings. The same held true for Range Rover. Witty advertising helped make the Range Rover appealing at many levels; they made you want to become part of the Range Rover family.

In a 2005 interview, Diane Rothschild called BMW’s decision to fire her agency — after 13 years of success — one of the “hardest moments” of her career. “It was rare in advertising to be able to develop a whole image. It’s the difference between adopting a 10-year-old child and an infant. Range Rover was an infant to us when it came.”

Bill Baker, our PR Director, engaged the aces in the automotive editorial world: David E. Davis of Automobile Magazine, William Jeanes at Car and Driver, John Dinkel of Road & Track, and John Stewart of Four Wheeler. These journalists knew the off-road racers, builders and designers. They drove the vehicles with the engineers, designers and CEO’s to give the full experience to their readership. They had earned their credibility. Bill wanted to give them real world stories.

The theme of combining a rarified life of Range Rover owners with an outdoor/off-road emphasis put Range Rover on the US automotive map. The World’s Most Inaccessible Picnic comes to mind. Take the best auto and lifestyle journalists on a mud-bogging, off-road trek in a “not to be disclosed” part of the planet. Have the mud-covered Range Rovers eventually pull into a bucolic field to stumble upon a tuxedo-yielding quintet playing Beethoven near the white linen luncheon next to the Winnebago.  How’d a Winnebago get to the most inaccessible spot? I will neither confirm nor deny that more than one Range Rover assisted that very rented Winnebago.

Everything from press events, advertising, auto shows, retailer training and meetings were immersed in the Range Rover lifestyle. There were no limits. Access to royalty and their stately homes, then drive in their back garden in a fleet of Range Rovers, no big deal. It’s the British way.

Back in America, things weren’t so easy.

My UK counterpart, Roger Crathorne, could not understand how I might struggle to gain access to Howard Hughes’ property in Nevada, or Malcom Forbes Ranch in Colorado. He’d say, “Just tell them you’re with Land Rover.” Well in the UK, those very words instantly gained access to places that forbade access. “Well, it’s Land Rover, ok here are the keys to the Kingdom, anything else we can do?”

“No that’s ok your Highness, that will do.”

I explained to Roger the 20-minute conversations I would have while getting fuel just explaining, “No, it’s not Toyota,” “Yes, Range Rover is a Land Rover,” “No, it’s actually a British company…” If I could have all that time back.

I suppose the momentum started with a predecessor to “Dipped In Green”. “Dipped in Green” would eventually be the name of a program that immersed every employee and everyone we worked with in Land Rover history, culture and product knowledge, and always — off-road drive. The retailers were not left out as Charlie and team wanted them to experience Range Rover firsthand in the dirt.

We introduced our entire retail network, all 30 or so of them, to Range Rover in January 1987, at the annual NADA [National Automobile Dealers Association] meeting. That it took place in Las Vegas gave us the opportunity to take Range Rover away from the Strip and out in the desert. We would follow some of the legendary desert racing course and see the beauty of the Nevada desert from the Range Rover point of view.

From that point on, every annual retailer meeting, sales training, technician training and media event centered on driving off-road… staying clean was not an option for anyone. It created passion and enthusiasm for Range Rover for anyone lucky enough to be part of these events. Everyone had firsthand experience in what made Range Rover so special.

Next came the customer experience. I went to individual retailers to help them find or build an off-road course close to them so that they could invite new owners and potential owners to a day of off-road driving. These became known as WHEELS events and still occur at some retailers today.

I don’t know that many manufacturers were really exposing customers to the off-road world back then. Although the Jeepers Jamboree was an annual event starting in 1954 or so, the events now known as “Jeep Jamboree” were just starting out in 1987, and only in a few locations. We not only showed America what Range Rover could do, we showed America what they could do in a Range Rover. The lifestyle was linked with the off-road culture. They soon realized that Range Rover was more than a vehicle, it was the entry to an exclusive, experiential club.

It remains that way today.