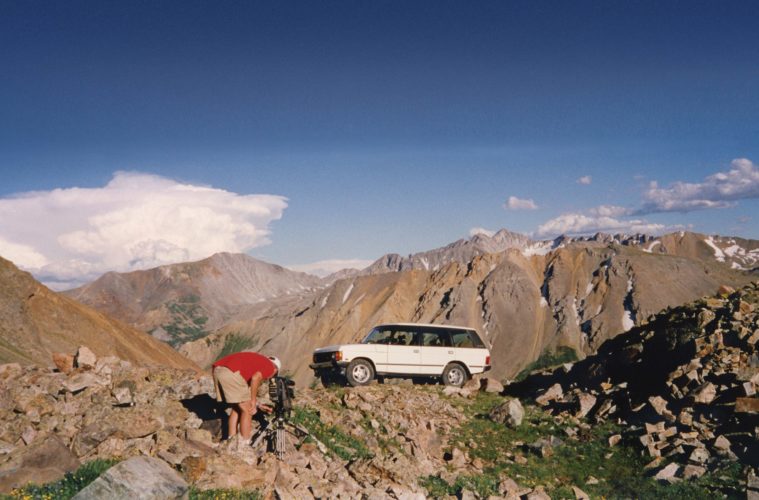 A Quarter Century with Land Rover

n 1986, when Charlie Hughes directed the creation of Range Rover North America, he hired the highly-regarded Bill Baker to introduce the fledgling brand into a household name in America. In turn, Baker brought auto consultant John Bulcroft on board to create imagery for the brand as he had one for Porsche and Audi. Range Rover needed more than plain imagery. They needed to show the capabilities of this luxury four-wheel drive vehicle, and a film to teach owners how to operate it. This video cassette would accompany each Range Rover sold in North America.

Bulcroft had worked with the husband and wife team of Allan and Sally Seymour, photographers and film makers who had a small video production company they ran out of the converted dairy barn on their farm in southern Vermont. Bulcroft was a New Jersey executive type and not much for the outdoorsy activity required to get the shot they were often looking for. “He was quite nervous out in the wilderness,” says Seymour. So, after one of the early shoots at the rugged Somerset Reservoir, he said that this type of promotion wasn’t his thing and suggested that they take over the Range Rover account. Thus began the direct connection between Bill Baker and the Seymours.

The relationship just took off from there and carried on for well over twenty years. “Every time they went somewhere they were smart enough to take us along,” says Allan. “If they did an event with the press, we were included. They were a very visual company.” They amassed a tremendous amount of footage that could be used in various press packages. As they decided to reintroduce Land Rover models to America, the Seymours were right there creating visuals for the brand, including launches for Discovery, Freelander, and Defender.

Range Rover North America required B-roll [accompanying footage to material used in the main advertising] to accompany press kits. To create footage they travelled to Colorado, Utah, and around their home state of Vermont to capture the vehicles in extreme terrain. Allan recalls shooting in Vermont for the first time when head office sent an enclosed car carrier to their house with five brand new Range Rovers on board. They were driven off and lined up on their lawn. Neighbors came by wondering if they were opening a new Range Rover dealership on the farm. “It was quite a spectacle.”

The very first shoots took place around Brattleboro, VT, with Bob Burns as part of the team. Allan scouted the surrounding area for locations with an adventure vibe to capture the Range Rover’s angles of articulation. The location was a path to the top of Wantastiquet Mountain, on the Vermont/New Hampshire border. I looked at Allan in amazement because from personal experience, (walking up the incline), I know that it’s a steep and treacherous trail. Allan said, “Well, I had to go for it because if I didn’t, I knew Bob Burns would.”

Then there was a dealership meeting in the Berkshires of western Massachusetts and with little notice, head office wanted a film that highlighted some of the Range Rover’s capabilities. Allan and Sally worked around the clock to edit footage they had already shot and to duplicate copies for the meeting. They completed the requested order and without sleep, Allan personally drove the copies to the meeting in on deadline. This really impressed Hughes and Baker, which led to the Seymours being hired again on the next project. Sally said, “It blossomed into a very symbiotic relationship as the company grew.”

The next phase was the adventurous press trips. The purpose of the Land Rover press trips was to introduce auto writers to the model of vehicle that was being featured at that time. Invited press outlets mainly included automotive magazines, but also daily papers and agencies such as the New York Times, Reuters, BBC, Cleveland Plain Dealer, etc.

1989. Land Rover embarked on an adventure across the Continental Divide in Colorado, which stretched 1,128 miles from the Wyoming border to northern New Mexico. Conservationist and off-road enthusiast Tom Collins led the team driving in Range Rover Classics, which included journalists from the UK, US and Australia [see Holiday 2014 issue -ed.] The journalists would come onboard the trip for a few days. “High style camping with good food and adventure,” Allan said. In post-production, the Seymours worked to make the program look more documentary than promotional, which resulted in coverage on the Discovery Channel.

Once their relationship grew, they were asked to go on trips outside of North America. To capture the sense of adventure, they started looking for exotic places to shoot, as well as giving back to their chosen locale. One day Bill Baker spoke to someone at National Geographic and he learned of a national project in Belize. Local archeologists wanted to restore many of the Mayan stelaes (monuments) scattered throughout the jungle and they needed a near-perfect model as an example. Bill contacted the University of Pennsylvania Museum of Archaeology and Anthropology, discussed the need, and commissioned a fiberglass replica of one of the stelaes. It was flown to Belize with the crew, mounted to the roof of a Discovery, and driven through the jungle to a selected archeological site where its presentation resulted in a small ceremony. The press writers in attendance once again wrote of the company’s goodwill towards local culture.

In 1997, the Camel Trophy took place in Mongolia and Bill Baker decided to piggyback off this historic event for Land Rover. A fleet of Discovery II’s arrived from the UK via rail through Russia to Lake Khovsgol in the north of the country. With vehicles and the necessary infrastructure in place to maintain those vehicles, Bill created a corollary press event — separate from Camel Trophy. They spent a full month in Mongolia, first traversing from the northern border all the way to the Gobi Desert in the south and the whole trip in reverse. One of the exciting features of the trip was that you couldn’t fly directly to Lake Khovsgol, so it required flying into Ulan Bator and then travel in a massive Russian military helicopter to the start site. This whole trip became a special on The Learning Channel. Forty percent of Mongolia’s land is designated as part of their national parks system and Land Rover made a donation to that fund for allowing this event to happen. Plus, they all got to meet the president of the country as part of the ceremony.

The Seymours participated in many other events, including the Trek Off-Road Competition and some of the G4 Challenges. The Seymours travelled to Iceland for glacier driving, Alaska for cold weather testing, on ice roads to the Arctic Circle, and off-road coursing in the Scottish Highlands, just to name a few more.

The trips were always quite difficult to execute, as they were booked around very tight schedules. It often meant dealing with obstacles along the way, such as rocky terrain, rain, mud, jungles, and water crossings, all of which are not camera friendly. Even more so, it meant thinking ahead of your present position and hop-scotching to the next place along the trail to get the perfect footage of the vehicles coming towards you. No second chances in most cases meant they had to get it the first time or not at all.

Allan and Sally were also involved in the various Defender launches. In 1992, Land Rover brought in forty white Defender 110s that were kitted out for expedition through the Special Vehicles division. These were intended for a trans-Siberian drive in Russia, which was cancelled at the last minute. Those ended up coming to the States as an afterthought, but like everything before it, required photos and footage for the archive. The following year was the launch of the Defender 90, which brought the Seymours out to Wyoming to capture the evolution of the Series truck in extremely rough conditions. They worked the Defender campaigns all the way up through 1997, when the last limited editions entered the country.

At the end of the interview, I asked Allan and Sally a simple question, “Would you consider yourself Land Rover enthusiasts?” to which they both replied, “Oh God, yes!” Their Land Rover lives have seen a Series IIA, Defender 90, and a Discovery. They lived with Land Rover for 25 years; for that period, it was the entirety of their lives, and they loved it.