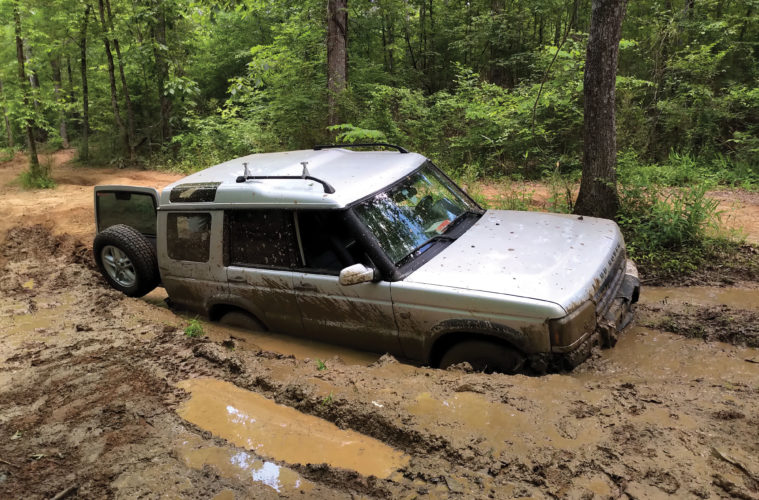 Behind the Steering Wheel – Fall 2020

These past several months have presented difficulties in getting behind a steering wheel. Travel restrictions during the pandemic have reduced my driving time. Back in March, I filled the gas tank in Gilroy, my ’97 Discovery I; the next fill up did not happen until May. Likewise, my two Series IIA’s, the QE I and Rickman the Virginian, have received zero and two fill ups, respectively. Obviously, I’ve not done much driving.

Between social distancing and state regulations, driving became restricted to essential needs by essential people. Few fit the bill as completely as the drive of Sandor Scher, Biscayne Park, FL. A real estate developer and construction manager, his Land Rover fleet consists of an ’18 Discovery 5 and a ’95 Range Rover Classic LWB. Not surprisingly, there’s more.

This Spring, he made an essential Florida-Wisconsin trek to support the medical needs of Jason, his identical twin. “Jay,” a triathlete and partner in Chicago’s famous Robert’s Pizza and Dough Co. (and previously, Vosges Haut-Chocolat), was recovering from quad amputations a year earlier and transplants from Sandor’s thighs to Jay’s knees. Sandor called himself “a walking bag of spare parts for my brother.” His son, “JJ,” wanted to help care for his uncle during his lengthy recuperation over the summer and would thus need a vehicle. Rather than fly during the pandemic, they chose to drive.

The summer before, JJ had received an ’03 Discovery II as a gift for his 15th birthday — with a catch. He could have the Discovery if he did the work required to get it running. Under the guidance and help of mechanics in Miami, JJ revived the Discovery (“He learned a lot from working on the Discovery, including Spanish,” Sandor noted.) After a week-long shakedown trip off-roading in Georgia, they were emboldened. JJ, his sisters Lev and Matteah, and Sandor decided that they should use the Discovery for the 1,700-mile trip to Wisconsin.

About 775 miles into the trip, Sandor felt a vibration from the front; when a similar problem arose once in his Range Rover Classic, the fault lay in the front driveshaft. Of course, it’s a weekend and critical time would be lost. That’s when the Land Rover community leapt into the breach. Shayne Young found a driveshaft and put it aboard a Greyhound bus heading to Chattanooga. Twenty phone calls to Greyhound and three trips to the Chattanooga bus terminal that Sunday revealed that Greyhound had lost the shipment. Sandor feared they would be stranded in Chattanooga awaiting parts.

Plan B began with a call from Shayne to Frank Morales, a parts specialist at Jaguar Land Rover Chattanooga. Frank turned to his old friend and former JLR technician Price Griffith, the owner/operator of Ooltewah Auto and Marine, just outside of Chattanooga. Price created a conference call with Sandor and the experts at Chattanooga Driveline, asking them to build him a new driveshaft. It gets better — Price loaned Sandor his personal Discovery, one old driveshaft from his stash to use as a core, and a heavy-duty shaft [with larger u-joints] from a Land Rover in his yard. He figured that either one could be rebuilt, or Chattanooga Driveline could create one from two. Two hours later, the shop called Sandor to come pick up his rebuilt heavy-duty driveshaft.

Price insisted that Sandor and family keep his Discovery for the day to complete errand runs while he installed the rebuilt driveshaft in Sandor’s Discovery. The next morning, the Schers left at 4:30 am and 18 hours later, arrive at his brother’s house in time for the critical medical tests.

As Sandor wrote, “Taking a 17-year-old Land Rover (my son’s first that he rebuilt himself) to see my twin brother who needed help and doing the cross-country road trip with my kids meant that all of the support from the Land Rover community was even more special — because we were truly on a mission. I know that as enthusiasts we often help each other, but this time, there was really an underlying special meaning to our trip. Shayne, Frank and Price, thank you very much! We do have to drive the Discovery back to Florida a few months from now, so there may be more chapters to be written on this adventure.”

In a phone interview, Frank Morales told me he had no idea of the medical imperatives behind the Scher’s trip. (“You’re making me tear up,” he said.) Price Griffith insisted that he’d done nothing special in utilizing his 30+ years as a Land Rover technician — and his personal Discovery — to help a friend of Shayne’s.

With all due respect, I beg to differ.

I witnessed both this summer, beginning with a much-appreciated visit from Scott Preston, formerly of Cape Cod, MA, Hendersonville, TN, and now of Southwest Harbor, ME. Actually, I benefitted first from his considerable carpentry skills as he helped rebuild the dissolving frame and floors of a client’s summer cottage. Then came my plea to help diagnose and remedy a failing charging system in Rickman, my IIA 109”. Specifically, if I failed to remove a battery cable at the end of a workday, the battery would drain overnight. Oh, and once started, a wire emitted smoke.

Scott poured over schematics in my Haynes Manual, my Lucas Fault Diagnosis Service Manual, my Lucas Colour Wiring Guide, and consulted with Rovers North’s Arthur Patsouris. He carefully sketched out his own schematics and dove under the hood, while I disassembled the fascia panel. Scott found that decades of custom wiring had left quite a spaghetti mix of dead-end wires. Using parts of an existing Series III wiring harness from Rovers North, he completed his wizardry. We started it up and — no charge. Swapping out alternators finally completed the successful repair.

Scott’s accomplishment made me wonder about two things: my own ineptitude about automotive electrics and the fitful charging system aboard my other IIA, the QE I. It, too, had been converted from a positive ground generator system to a negative ground alternator. As I peeled back the wiring harness tape, my heart sank, as I exposed melted insulation and bare wires green with corrosion.

Once again into the breach, this time, under the skilled care of Camel Trophy photojournalist Lou Sapienza [Kalimantan 1996]. He arrived on the island with enough electrical gear to rewire the International Space Station and set to work. Lou had previously visited when I needed help replacing the transmission in the QE I [see Summer/Fall 2018 issue -ed.] Happily, he was not averse to another trip to the island. I pulled Scott’s drawing from my archives and Lou, who continues the rebuild and customization of his longtime Series III, examined them with care. This time, the colors of the wires did not match the Lucas colour codes, so it required a lot of guesswork — but in the end, success!

“It is not surprising that some of our best stories retell episodes from the road,” wrote Matthew Crawford in his latest book, Why We Drive: Toward a Philosophy of the Open Road. If pandemic restrictions limited my time behind the steering wheel, at least I could enjoy his insights — you will, too.

For Crawford, driving becomes “an occasion when you exercise your experience of being free. It tests your self-reliance… To drive is to exercise one’s skill at being free, and one can’t help but feel this when one gets behind the wheel. It seems a skill worth preserving.”

He’s a fan of off-roading, which Crawford insists is really “getting off the marked-out trails. It’s a little bit like going to sea. Off-road, there are no traffic lights, no lanes and very few cops. You have to rely on your wits and ingenuity, and be willing to ask other people. I have found that when you open yourself up to others, you do so with less prejudice, and this can affect the way they receive you.” Reading this made me reflect on the off-road events I’ve participated in, all my nervousness and uncertainty, and all the help and guidance I’ve received from Land Rover enthusiasts.

Crawford also appreciates old cars, which he identifies as a “thorn in the side of the future. Old cars elicit a range of feelings… For those who value old cars, they become the focal point for a way of orienting to the world and finding meaning in it. As such, they exact a moral sensibility of stewardship, an outlook that values continuity.”

“Another of them is that elusive feeling that we sometimes try to name with the fraught word ‘authenticity.’ The car may bear visible scars of a life fueling lives, traces of a past that lend depth to the present.” Indeed, the QE I still has a crease in the front left wing from the sidewall of a crevice in Harrisville, NH, from the early 90s. Quoting David Freiburger, Crawford agrees that, “Patina lends proof of life. It tells a saturated story of age, of history absolutely unrevised. Its unique character of textures can’t be bought for any price or fabricated with even a presence of dignity.” That’s another good reason — besides cost — not to give Rickman a proper painting.

“Sometimes a car seems not simply to move you through the world, but to put you into the world more thoroughly.” Nothing describes the sensation of driving a Series Land Rover better — especially when their charging systems work properly!