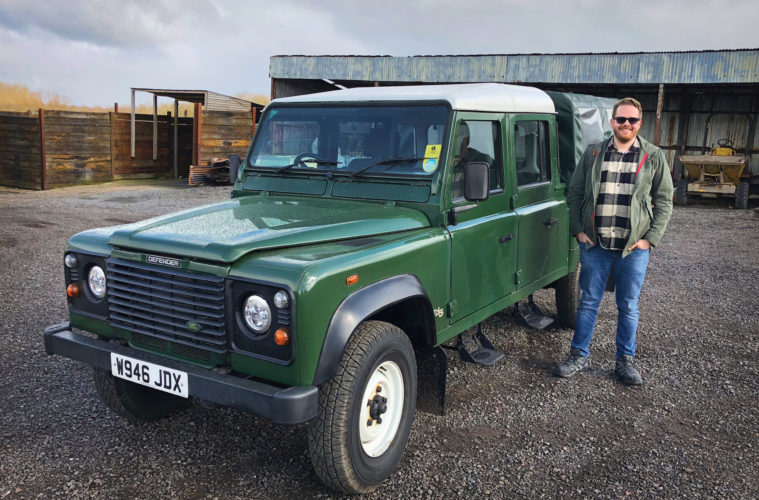 At age 53, Ian Guns, Vancouver, BC, and his wife, Emma, have watched their children grow into adults and they’re looking ahead to the next chapter in their lives. Ian has worked in Canada’s film industry for over 20 years; it’s there he met Spencer Whitney, his Land Rover mate. Since then, they’ve shared many great chats about Land Rovers.

Ian’s not sure if his love of Land Rovers started on the silver screen or the outback of Australia. He lived in “the land of down under” in the 80s, and returned recently with his family. While camping in the outback, they’d often come across a Defender, along with the expected eclectic owners. “The sense of independence and freedom their lifestyle exuded made me want a Defender of my own. It’s lack of pretentiousness and infinite possibilities in style and function suite me well,” Ian explained.

When Ian and Spencer started talking Defenders, Spencer expressed an interest about bringing one back from the UK. “I knew that the best deals would be in the UK or Europe; here in Canada, there were few to be found and prices seemed steep. I searched in France and Spain, but did not like the dings and dents that come from a ‘park by feel’ place. The UK has a lot of Defenders, which gave me more to look through in a relatively small place. After a few months of research, I had a good idea of what was available and awaited a return to see the Defenders in person.”

Several long days at work, with many excited ideas and Google searches later, they hatched a plan to head overseas in search of the right one. For Spencer, that meant the 2000 Defender DCPU (double cab pickup) that he found in Scotland.

Ian and Emma (who is English) had planned a trip to the UK that coincided with Spencer’s Defender purchase. The timing worked out beautifully. Spencer and Ian met on a cold March night in Edinburgh, jumped in his new-to-him 130 and headed south. They meandered through dales and quaint towns, stopping to examine any Defender advertised that seemed worth their time. To Ian, the perfect Defender would be a 110” SW with a TD5, and as new as possible within Canada’s 15-year importation rule. They even had an overnight in an ancient pub with “the best meat pie on earth.” —they kept continuing south.  No example touched his heart until near London.

“I first saw ‘Red Rover’, a 2000 110” SW with a Td5, in the back lot of a lorry service yard in a rural area south of London. A long row of Defenders, mostly 90s, greeted us,” Ian stated. “The owner of the lot had her warming up along with another 110, a blue beast with a little less of whatever it was I wanted.” A couple of quick test drives later proved that the red one squeaked less and had the power and shifting quality you’d expect from a 15-year-old beast with 60k miles on it.”

Ian slept on the idea, but grew ever more excited about it, as well as the little he knew of its provenance. The next day, out came the credit card and Ian arranged for them to take both his and Spencer’s Land Rovers to the shipping broker, after a quick belly wash to remove any of the nasty English dirt. Ian only had a few hours with his Defender before they got dropped off to take the train into London. “It was an odd feeling, leaving not just mine, but Spencer’s Defender with some strangers, entrusting them to get the vehicle loaded in a container and sent around the world.”

Ian feels a special connection with his Defender SVO. Originally built for the Newcastle Fire and Rescue Department, it served on the shores in and around Newcastle with its enormous, Superwinch, PTO-driven, with 18,000 lb. pulling power. He knew it traveled some of the same places as his great-grandfather, a sea captain who had left from Newcastle and sailed to Newcastle, New South Wales, Australia. He then returned up the west coast of North America and stopped off at a port town of 1,000 people named Granville, that would grow into the city of Vancouver.

Ian’s great-grandfather settled there when he retired and became a ship’s pilot, guiding in the new steam ships through the foggy narrows of the Burrard Inlet. “Given the honor of being one of Vancouver’s pioneers, he lived a long and fruitful life,” Ian said. “As a man of the sea, who had little experience with these new things called automobiles, he took it upon himself to buy his first car at a tender age of 93, and vanished into the woods. For two days, he must have treated the wild forests of BC as he did the sea, “with boundless adventures and a sense of true freedom to move.” Ian’s great-grandfather did return and settled back into his remaining time staring out to sea knowing he had lived a full life.

Since returning with the Defender, Ian has replaced the brake components, wheel bearing and the rear axle shafts. He’s looking ahead to tackling chassis rust or even a galvanized chassis.

Spencer, who lives in Surrey, BC, has been into 4x4s since he could drive, initially with Jeeps — until he saw the light. That’s when a Discovery I drew him in like a moth to a flame. After a few years of ownership, he started learning more about Defenders and classic Land Rovers and became intrigued. There weren’t many of them around, and he didn’t really know what they were all about. He honestly thought most people in North America felt the same. He assumed they knew these rigs existed, but didn’t know how capable or iconic they really were! With the end of North American importation, suddenly the whole off-road world lusted over Defenders; he soon became one of these people.

Spencer had been originally looking for a 110, 2-door (commercial), but when the 130 became available on a Scottish dealer’s lot, he quickly made plans to visit the dealer — it ended up being the first Defender he ever drove on the open road! He made a deposit, returned home to BC, and then traveled back to Scotland to take the 130” on a shakedown cruise with his friend, Ian.

Land Rovers and their owners have many tales to tell. Owning one creates a sense of pride, community, and adventure. Ian said it best, “My Land Rover Defender 110 SVO has provenance and ties to my ancestors, the constant reminder that there is one life, and I must live it.”