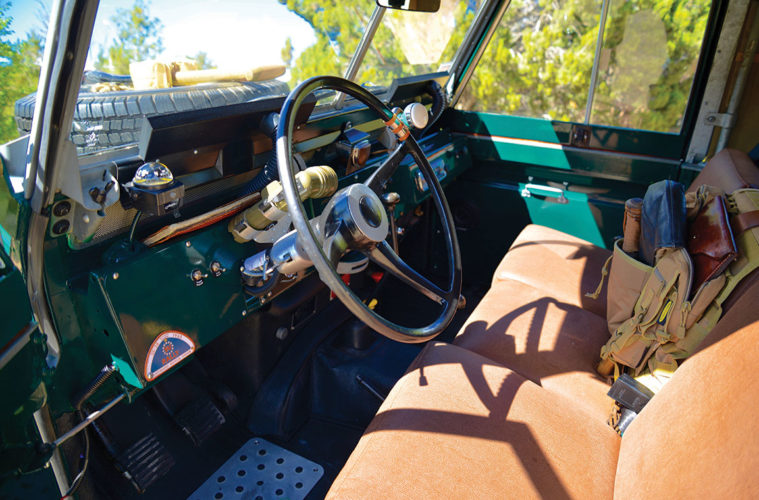 A Member of the Family

Lou Staney grew up on a farm near Ft. Knox, KY, where he learned to appreciate working vehicles — especially 4×4’s. Even when he entered the financial services world in 1980, he came to appreciate the ability of 4-wheel drive to get him to his office in any weather. Given that his office locations ranged from Beverly Hills, CA to Chicago, IL, he certainly experienced all possible driving and meteorological conditions.

“Most financial advisors who became successful found themselves drawn to sports cars or supercars, but I was more pragmatic about my cars,” Lou recalled. “The Land Rover appealed to me for several reasons. My family’s ancestry is based in Northern Ireland; when traveling throughout the UK I saw Land Rovers everywhere and recognized them as part of British culture. I’ve always liked unique vehicles and was very taken by the style. I also felt it was a vehicle that I could approach on my own and would not require a specialist — which has proven to be the case.”

He began his search in 2001, and later, after scrolling through magazines like Hemmings Motor News, classified ads online and in newspapers, he found his perfect choice on eBay. The owner so loved the Land Rover that he had built his house around it. After agreeing on a full price offer over the phone, Lou wondered how in the world he was to get it out of the dwelling.

It turned out that the seller had installed a large roll-up door in his living room, so he simply drove it out of the house ready for delivery. To Lou’s delight, the ’65 Series IIA fired right up with a push of the starter button. Even with its patina, it had only 9,000 miles on the clock and included safety improvements such as an internal roll cage and reinforced seat belt brackets.

Lou left the frenzied corporate financial world in 2004, and four years later, settled with his wife, Mary, in Santa Fe, NM, where he serves as a consultant in securities fraud and as a recognized author of books on the subject. It’s also where his beloved “Rhino”, refreshed with a Bronze Green and Limestone paint job, now resides and enlivens the crowds at auto show and charity events.

The drivetrain is the expected 2.25 L, 4-cylinder engine, 4-speed transmission connected to the 2-speed transfer case, but also with the addition of a Fairey overdrive. Other than routine maintenance, the drivetrain and transmission have required little work. Lou shod his stock 16” wheels with 6.5/16 Michelin tires to retain the right footprint.

An avid collector, Lou decided to “dress” the IIA with a bamboo fly rod, a crossbow, a pith helmet, a Broad-Arrow machete (like those carried by the British MoD), a folding canvas water bucket, Whitworth tools, Indiana Jones-style bullwhip and chalice, an Enfield rifle, and an AM/FM/SW radio and Morse Code signal key — among other artifacts. On the exterior, he’s included the appropriate folding shovel, international license plates and safari entry permits.

When attending vintage car shows, Lou explained that he often heard comments associated with the movies Born Free, Indiana Jones and The Gods Must Be Crazy;all of them in some way related to a vintage Rover. When asked about his most memorable car show experiences, he said, “I met a British tourist in Santa Fe who asked me to lift the bonnet and then pointed to a fitting that he said he was the only person at the Solihull factory that installed that engine part.” Lou continued, “In a one-minute spot on earth, there was a reunion of labor, love and memories.”

On another occasion, he had noticed a lady weeping as she gazed at “Rhino”. Lou discovered that her mother had been the supervising nurse for remote Peruvian villages and that this lady and her sister were regularly seated in the back of an identical vehicle while keeping vital medicines from getting jostled around as they trekked through the Andes. The weeping lady went on to say, “I consider that Land Rover as a member of my family and vital to the people of those impossibly remote villages.”

As it turned out, Lou’s “dream of adventure” came true by acquiring and outfitting his Series IIA “Rhino”. Not only has his lifelong passion to own a vintage Land Rover been fulfilled, there has been an overwhelming sense of exhilaration and excitement for many folks that had the pleasure of seeing it.

Singer-songwriter Willa Amai lives in Los Angeles, CA, “right near the original Bob’s Big Boy.” She might only be 16, but she has accumulated many achievements in her young life. Her grandfather, Lou Straney, is immensely proud on her.

In an interview, Willa returned the compliment, stating that, “‘Poppy’ is my biggest fan. My sister Harper [a cellist herself -ed.] and boyfriend think they’re my biggest fans, but no — it’s really my grandfather!”

Willa has been singing “as long as I could make noise. I was a late walker, so my parents had to put up with me being stationary and loud. My report cards in preschool reported that I would walk around the playground and make up songs. At school events, I was performing my own songs. It’s addictive, there’s so much elation, and it feels so good to to perform.”

The family pride is mirrored by professional recognition. Willa has been signed to Linda Perry’s (Christina Aguilera, Pink) recording and publishing company, We Are Hear. She’s already recorded with Dolly Parton, a duet of “Here You Come Again”, for the soundtrack of the film Dumplin. Willa recalled, “I was 12-13 when I first met her. She nurtured and encouraged me, saw me and treated me as an equal. Dolly lives up to every expectation.” Before the pandemic restrictions on concerts in California, Willa performed on stage with Natasha Bedingfield (“She can do anything with her voice!”).

Willa really adores “Rhino”, Lou’s Land Rover. “I’ve always loved Land Rovers, and I’m so proud of all the awards he’s achieved. He has also created a wonderful presentation of the Land Rover for every event.”

[You can listen to Willa Amai’s “Here You Come Again” on Spotify, iHeartRadio and YouTube -ed.]