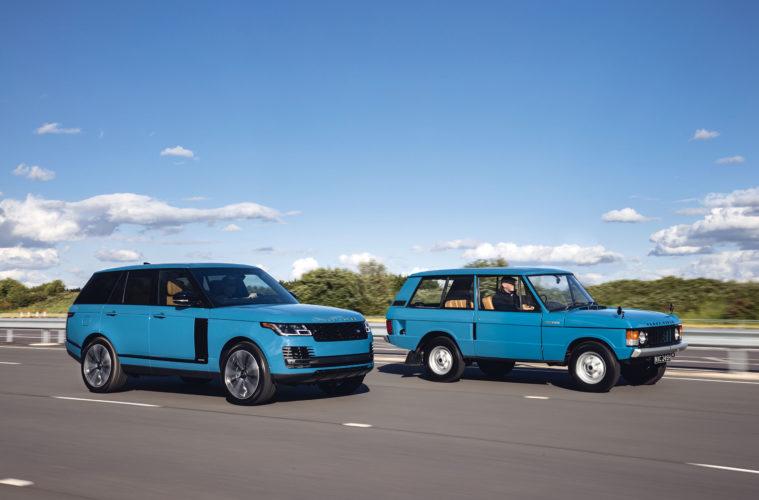 Behind the Steering Wheel – Holiday 2020

In 2013, with Daniel Craig’s help,  Land Rover introduced that year’s Range Rover Sport and we had the pleasure of discussing the new Sport with Land Rover CEO Andy Goss, Range Rover Programme Director Nick Rogers, and Land Rover’s Global Brand Manager, John Edwards. We welcomed the return of a Land Rover diesel in the North American market with a technical article and road test in 2015. In 2017 and 2018, we covered the return of the Velar nameplate with the introduction and California test drives of the new model. In the Spring of 2019, we joined Land Rover in Greece for the Global Launch of the second-generation Range Rover Evoque.

I’ve never owned a Range Rover, although decades ago I almost bought a grey-market, two-door Range Rover, and later I passed on a mid-90s SWB, in my favorite dark green. I came close to purchasing a Classic before I chose my ’97 Discovery I instead. I’ve enjoyed rides in Classics owned by Greg Black, Lincolnville, ME, and Carlos Melo, Bronx, NY. From the inside, the near-optimal seating position, the instrument pods, the ergonomics of the wheel and pedals, the thin door pillars, and the vast greenhouse enthralled me. Watching them off-road was exhilarating.

Driving the newer Range Rover models during Global Launch events demonstrates their ever-increasing refinement, but there’s a sublime driving experience absent in new models. In the successful quest for major reductions in NVH (noise, vibration, harshness) — essential, as marques that compete seek the same reductions — and in concert with interior enhancements, there’s a driving connection that’s been reduced.

The Range Rover Classic, P38A, and L322 Range Rover Sport models never let you forget that a road, with all its imperfections, lay underneath the vehicle. Yes, they lacked the torsional rigidity of the newer monocoque models, but that didn’t render them unpleasant to drive. I remember returning from the Range Rover Velar Launch in Palm Springs, CA. I stepped into my ’97 Discovery I and drove about 20 feet before I thought that the Discovery had lunched its wheel bearings, transfer case, and/or transmission. What was wrong? Actually, nothing; I had just been spoiled by three days in a contemporary Range Rover. Once I realized nothing was “wrong,” I calmed down, shifted emotional gears, and returned to the connection with the road and to the physics of the vehicle. Later, I would call Bob Burns, the former Special Events Manager, who said he felt something similar stepping back into his Range Rover Classic – but like me, he felt more connected in the RRC than any new Range Rover model.

Manufacturers use electronics to create the right exhaust sound; surely they can return road feel — the ultimate connection — to the driving experience.

For the longest time in the US market, ownership of a Range Rover has come to mean a higher social status, irrespective of the many technical qualities of the vehicle. A good part of that arose out of Land Rover’s initial marketing of the Range Rover as a luxury experience rather than an engineering experience.

What if you grew up in a place where Range Rovers were seen as a pinnacle of automotive accomplishment, admired for their capabilities as well as their refinement? A chance interview with Sharon Thompson, Columbus, IN, helped me comprehend that difference.

Sharon grew up in Kenya, orphaned at a very early age. She graduated from Maseno University in Kisumu, Kenya, earning a B.A. with a minor in Information Technology. She emigrated to the US in 2012, as, she said, “I did not like the roles assigned to, or expected of, women in my country.” While working in health care in Indiana, she’s pursuing a B.S. in Nursing through Indiana University–Purdue University Columbus. Her goal is to attend medical school. “I’ve always wanted to be a doctor,” she said.

“I grew up in a former British colony that still retains the British language and close emotional connections with Great Britain. Range Rovers were the cars I saw on television programs, doing amazing things. I did not associate them with wealth, but with capability and design. I thought they were brilliant and I was determined to have one in my life. I’ve carried that dream over continents, and it has finally come true.”

Echoing Dr. Gerry McGovern, Sharon rhapsodized about the functional lines of the exterior and interior. “They make a statement, but it’s an elegant statement. The Evoque’s beauty is discrete, not flashy. My boyfriend agrees; he’s a BMW guy, but now he wants a Ranger Rover.

The Defender Media Drive excited me not only for the opportunity — finally — to spend time in the new Defender, but also because of the chosen venue, the sort of place that Land Rover travel seems to make possible.

Gather Greene sits on 100 acres just outside of Coxsackie, NY, a Hudson Valley town set within the Catskill and Berkshire Mountains. It’s only 30 miles south of Albany, a scenic 134 miles, or 2.5 hours, north of New York City. The mixture of fields and woods landscape, 17 brilliantly designed cabins and one soaring pavilion building made it a safe, socially-distanced overnight destination for our group of eight journalists and JLRNA hosts.

In times when social-distancing and large group restrictions make Land Rover group events a challenge, I could not think of a more enticing locale.

The venue is the combined vision of Amna Ali, from Karachi, Pakistan, and Jackie Brown, from Newton, MA (“Amna’s hometown is way more interesting than mine,” said Jackie). The impetus to create Gather Greene was “misery.”

They met as graduate school students at Pratt University and found themselves working on projects for the Museum of Natural History in New York and the National Museum of African American Culture in Washington. “Neither of us really liked our jobs,” recounted Jackie. “We had this existential dread of not getting to do the creative things we really wanted to do.”

So they quit their jobs and started a design firm together. Jackie had studied in Copenhagen while in graduate school and had become fascinated by connecting the indoors and outdoors in every building design. “We had come from spatial exhibition work which helped us envision that connection,” said Jackie.

You turn at a farmhouse to enter the property and there’s a long, narrow lane through cropped fields before you see a barn roof soaring in the distance. The Pavilion building has retractable walls so it can remain open to the elements, as with our group, or enclosed to keep the temperature reasonable. A hidden kitchen facility, staffed by chefs and servers who know their craft, provided superb meals.

Amna explained, “The design concept blurs the boundaries between the indoors and outdoors. We wanted to create spaces that would allow guests to enjoy solitude through our cabins and companionship in the shared spaces, such as the Pavilion, the paths and our group-size fire pit.” I will confirm that the fire pit was large enough to enforce social distancing, and hot enough to toast the perfect marshmallows and s’mores.

Jackie suggested that their shared lack of event planning experience meant that design, with the input of landscape and building engineers, became the main determinant of the entire endeavor. There’s nothing pretentious about the place, but you just sort of gawk in wonder at every turn; how on earth did Jackie and Amna come up with this? Land Rover’s Dr. Gerry McGovern would surely approve.

It’s the 17 cabins that captivated the most. Twelve of them have a glass wall behind a king-size bed with an open view of ridge line of leafy trees; the remaining five sit beautifully in their own verdant groves. A series of paths lead you to an abandoned quarry. It’s as idyllic, calming yet functional a setting as imaginable.

The cabin interiors take their inspiration from the best of yacht architecture and minimalist design that I last saw in Iceland. Every square inch is put to perfect use. Every nook has a function. Somehow, each cabin has a king-size bed, shower, bathroom, mini-fridge, and coffeemaker — perfect for 1-2 people; if you tire of your roommate — or vice versa — step out onto the spacious deck. (One cabin is fully handicap accessible.) Heat pumps keep them cozy or cool, depending on the season.

If I wanted to meet-up — safely — with other Land Rover enthusiasts, in a stunning venue, Gather Greene would be my choice.