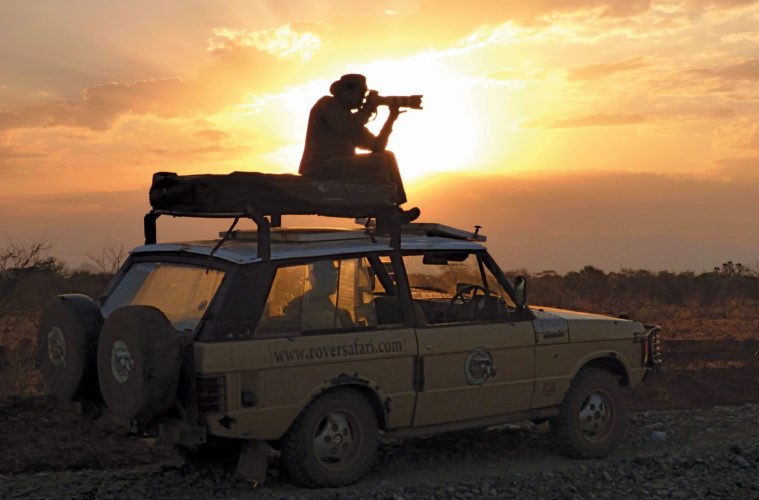 Half a century ago, few of the design team at Solihull could have imagined where their new baby would travel, and how. The birth of the Range Rover was significant for Land Rover for many reasons: Land Rover’s “family car for the farmer” quickly reshaped the whole world of four-wheel-drive vehicles and had enormous impact in many markets.

One of the more unforeseen impacts came in expedition and remote-area travel. After all, the Series Land Rover, and later the Defender, had become the first choice. Land Rover quickly recognized the potential of the Range Rover and made a strong statement of capability in this arena within two years with the 1972 British Trans-Americas Expedition, led by Colonel John Blashford-Snell. This epic undertaking used two Range Rovers to drive the entire length of the North and South American continents, including the roadless, 250-mile Darien Gap, and demonstrated that the Range Rover could be used as a very capable expedition vehicle.

Other highlights appear on the “Classic” Range Rover’s expedition resumé, such as the 1981 and 1982 Camel Trophies, in Sumatra and Papua New Guinea. Range Rover North America created the 1989 Great Divide Expedition from Wyoming to New Mexico, across the Continental Divide in Colorado. The 1995 Hannibal Trail expedition through the Alps is a landmark, the final “factory” expedition of the Classic, just before the evolution into the P38 iteration. Tom Sheppard, leader of the first expedition to cross the Sahara in motor vehicles, owned one for a long while. As well as these famous exploits, however, many enthusiasts have used Range Rovers to chase the far horizon for their overland and vehicle-dependent expeditions — and many still do.

What is it about the Range Rover Classic that makes it such a capable vehicle when venturing off the map and into the blue?

Partly, of course, it’s the fact that from its launch in 1970, the Range Rover is just more of a good thing. After all, the original idea took the Series recipe and added more comfort. So a hugely strong ladder chassis, enormous articulation of the (newly) coil-sprung beam axles, high-low transfer box, centre difflock, solid engine and transmission — all the ingredients that made the Series Land Rover a world-beater contributed to the Range Rover’s capabilities. Add to this that 100” wheelbase, a perfect compromise between the 88”, 109”, and 90” lengths of the traditional Land Rover “shorty” and the bigger load-lugging beast, and you have a vehicle which can haul lots of kit and still retain agility.

Additionally, even the most dyed-in-the-wool Series or Defender fan, in their heart of hearts, will admit that spending a day driving one of those beasts at freeway speeds can be a nerve-jangling experience.

“I said a nerve-jangling experience!”

Not so in a Range Rover. The combination of softer springs, better soundproofing, more ergonomic driving position and less resonant bodywork gives a far more relaxed driving experience. Higher gearing means not only can you arrive at your destination with hearing intact, you can arrive earlier. The Range Rover Classic will take you across a continent with far less fatigue than a Series Land Rover or Defender (or, well, pretty much anything else).

There are trade-offs. The space in the rear for kit and cargo isn’t massive — though dropping the back seats helps. Like Discovery, its offspring, Range Rover is designed more for crew and passenger comfort and less for utility. The springs, as standard, are quite soft — yes, it means good cross country ability, but it also means a more wallowy ride. These have proven small problems, easily overcome.

My most recent expedition uses of a Range Rover Classic took place in Kenya, working on a lion census in Meru National Park, in the Himalayas of Nepal, and in the Egyptian Sahara, on several trips into the open desert to find remains of fossilized dinosaurs. In the two African trips, the truck in question was a 1970s Classic two-door V-8, whereas in Nepal the Classic was a four-door, ex-Nepali Royal Family Tdi, named “Bessie”. But in each case the Range Rover had to work very hard, and in each case it proved to be a very capable and efficient expedition package.

The Classic has other advantages as an expedition rig. It’s true that the Range Rover marque has maintained this adventurous pedigree since birth — the 2013 Solihull to Mumbai “Silk Trail” expedition in diesel hybrid Rangeys, the 2014 “Great Divide Revisited” Expedition, the financially-aborted “Darien Gap Revisited” plan, and so on — but whereas the newer siblings are no doubt more capable off-road, the Classic is, vitally, field-maintainable, as I found in northern Kenya in 2015, when a much-bodged, 40-year-old throttle cable snapped, at night on a dirt track used by Somali narcotics smugglers. My buddy and I fixed it with a Leatherman by the light of a headtorch — but not before three trucks full of illegal narcotics had blasted past us, crammed with Kalashnikov-wielding Somalis! Much as I love the newer models, you couldn’t do that fix on a 2020 Range Rover. That was the trip during which the never-maintained, 40-year-old wiring loom failed and the headlights went out, too — driving through a stretch of jungle frequented by elephants. I carried on by strapping my extremely bright LED headtorch, set to maximum intensity, to the bull bar. Just as well, because a family of huge tuskers strolled across the jungle trail ahead of the Range Rover a few minutes later. The elephants definitely had right of way — Range Rovers are tough, but elephants are a lot tougher!

There are several ways to adapt a Classic Range Rover for overland and expedition use. Many fit slightly larger than standard tires and use a gentle suspension lift to accommodate them. The standard Range Rover suspension, designed for comfort rather than load carrying, might need beefing up, especially if you fit a roof tent. Some users dispense with the rear seats altogether, enabling a larger cargo area.

Like Discovery 1 and 2, the Range Rover hasn’t really got a long enough load bay to allow sleeping in the rear. There are a few wild and wacky conversions to permit this, yes, but with a 100” wheelbase and more “driving cab” space than a Series or “Classic” Defender, the original Range Rover is likely too short for most people; for many, roof tents are the way to go.

Lashing points in the rear are a good idea — it’s a big flat area, so loads might shift more in a Range Rover than a Defender or Series. Many mount a second spare on the roof; some even fabricate a swingaway spare wheel carrier on the back — but you will definitely need to strengthen the back springs in this case. Range Rovers can also heat up quite quickly in hot weather — they have a lot of glazing, which acts like a greenhouse. You can buy reflective blinds for the rear side windows to reduce this; tinting windows could help if you plan on desert use. You can retrofit AC to vehicles that don’t have it, but remember it increases fuel consumption and dehydrates cabin air (and occupants). Jackable steel sills and metal fenders front and rear will help, especially if, like me, you are a Hi-Lift jack user.

In summary, then, if you fancy taking a Range Rover Classic to steal the Pearl Eye of the Snake God, cross the Last Desert or navigate to the source of the River at Hell’s Gate, it will absolutely do the job. It’s tough, extremely capable and easy to fix when stuff breaks. A Range Rover on expedition always reminds of me Daniel Craig’s James Bond as he drops through the devastated train roof in Skyfall in hot pursuit of the ungodly — yet pauses first to adjust his cuffs. As the Range Rover breaks clear of the jungle, or appears out of a sandstorm, you hear a subliminal message, “Yes, you can strike a match from the stubble on my square jaw, but in a moment I’ll shave and dress for dinner, old boy.”

It is an outstandingly capable machine and has been for fifty years. Happy Birthday Range Rover!