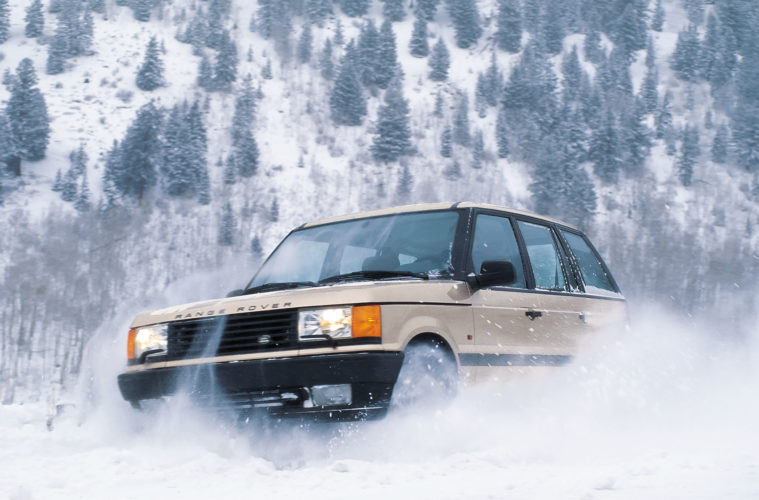 The Range Rover inalterably changed the nature of Land Rover, both as a marque and as a company. To understand those changes requires a step back into the days of Cabbage Patch Kids, Madonna and MTV.

As transformative a vehicle as it was, the Range Rover’s success throughout the 1980s shielded the company from some harsh realities. First, the traditional markets for the Land Rover 110 and 90 had evaporated with the strength of the British pound, the relative weakness of the Japanese yen, the impressive capabilities of Japanese automotive competition (Toyota, Mitsubishi and Isuzu), and the changes in customer expectations. While enthusiasts continued their loyalty to the coil sprung Land Rovers, potential leisure market buyers were put off by the narrow cabin, ropey build quality, and relatively high cost.

Secondly, the company recognized that it needed capital to develop new models, and within its corporate parent, British Aerospace, it competed with the needs of the aviation industry and the demands of future development of Rover and MG cars. As the demands of the parent conglomerate changed, BMW found itself flush with profits, a desire to grow into a more global car company, and an admiration for the Land Rover and Range Rover models. It bought the then-Rover Car Group in 1994.

There’s been plenty of acrimony spilt over BMW’s impact on Land Rover, but the Bavarians had already been involved with the development of “Pegasus,” the P38A model (named after the building that housed the styling buck). The 2.5, straight-6-cylinder diesel came directly from BMW. The styling came from in-house, after a Bertone design was considered too radical.

The P38A incorporated many features that had been tested out on the Classic long-wheelbase version, such as the Electronic Air Suspension, and at least in the eyes of the Land Rover design team, retained the styling hallmarks of the Classic. To avoid the panel gaps that plagued the Classic, much of the steel body was actually a monocoque unit. The P38A relied on complex ECU’s connecting operational functions, with a new security system. The new fascia incorporated the driver/passenger airbag system, and relocated window and seat controls. Land Rover had determined that the role of the Range Rover should be to entice customers to replace their luxury sedans with the new model.

Sandy Cameron, Lincolnville, ME, the Ship Engineer for Maine Maritime Academy, has owned both a ’95 and ’96 P38A. He said, “My favorite thing about the vehicle is its combination of comfort with solid off-road capability. In 2012, with almost 200,000 miles on the vehicle, my son James and I drove our ’96 across country from Seattle (a week of 10 hour days, including a few side tours) in complete comfort. But I’ve also driven my ’95 through terrain so tough I had to winch myself downhill to safely roll off boulders. It’s like off-roading on a couch.”

“All the sensors and systems demand proper voltage to function well. It’s important to monitor system voltage and the conditions of the ground posts regularly; you can expect to replace the battery fairly frequently. The different electrical systems connect with each other: engine sensors, air bag control system, WABCO brake system [the modulator that controls the electronic traction control -ed.] and the ETC. Even the dreaded ‘Three Amigos’ (brake system warning lights) can be very useful tools to monitor and assess conditions of the critical components of that system. Watch the lamps extinguish when starting the vehicle after it has sat overnight. Upon first start up, it should take roughly 30 seconds for the brake system hydraulic accumulator to pressurize. Two of the warning lamps should extinguish once the system pressure is correct. If it’s too quick, your accumulator may need replacing; too long and your hydraulic pump may be getting weak. Sometimes, rarely, it is the pressure switch, but these components are the work horses of the ABS system and should be monitored closely. You can save yourself replacement costs by paying attention.”

“And as an added bonus, my P38A’s have not developed the rust points like my earlier Range Rover Classic.”

In 2000, Ford, which purchased Jaguar the year before, bought Land Rover from BMW, and consequently separated the decades-long connection to Rover Cars. Ford owed a big thanks to BMW, which had put upwards of $1.5 billion towards the development of the Third Generation Range Rover, known as the L322. The engineering resulted in a new 4.4L V8 (282 hp, 325 ft-lbs torque) for the US market, and retained the electronic traction control, electronically-controlled air suspension, and terrain-sensing software that controlled shock absorber action for better on-road handling. The sticker price had risen to $71,200.

Just as importantly for Land Rover, 2006 also saw the introduction of the Range Rover Sport, to this day the most popular model Land Rover in the US market.

Richard Woolley, currently the Design Research Director for JLR, recounted the creation of the Range Stormer, the concept car for the Range Rover Sport. Woolley has spent over 20 years working on Land Rovers, including the P38A and the Freelander. His time with the company spanned the ownership under the Rover Group, BMW and Ford.

In an exclusive interview, he recalled that up until about 2002, “There had been only one Range Rover, and there was quite a bit of nervousness about adding another model to the family. I remembered that when the Range Rover was launched in 1970, a contemporary advert claimed it to be ‘Four Cars in One: estate car, luxury saloon, sports car, go-anywhere car.’ Well, over time, the sportiness had lessened and we thought we could reinvigorate that.”

“We had already started on a production model, so the Stormer was to open up peoples’ minds to the sportiness factor in a Range Rover. Its introduction on the auto show circuit was intended as a prequel.

We explored the idea of of a two-door model, but marketing research demonstrated that it was not a viable idea to potential customers; it’s usefulness was reduced too far.”

For the Frankfurt and Detroit Auto Shows [Fall 2003 and January 2004, respectively], Land Rover presented its first-ever pure concept car, the Range Stormer. Its “blade and runner” doors opened scissor-like, with the bottom portion becoming a running board. It certainly drew attention to the new Range Rover model, and became a poster that adorned a lot of walls internationally.

Woolley noted, “Our intention was to make the Sport more compact, tighter around the wheels, lower, but retaining the command driving position.” The end result would have been a poseur had not Land Rover come through with the requisite performance and handling. “We had the experience of Jaguar engineers in determining the high speed suspension needs and power train upgrades. We wanted it to be fully capable at high speed.” Although the supercharged engine (390 hp, 410 ft-lbs torque) remained an option, Richard considered it the “pinnacle of performance. It was in the plan from Day 1.” The Sport’s dynamics were the purview of Mike Cross, “a very capable drive and vehicle dynamics expert who led the team that honed the balance between power and handling.”

The Range Rover Sport was a huge hit. Sales of the first generation L320 (2006-2013) ranged from 11,000-28,000, depending largely on availability from the UK [It remains the best selling Range Rover model in the US to this day -ed.] The drivetrain received an additional boost in 2010, when a new 5.0L V-8 (375 hp, 375 ft-lbs torque) went under the bonnet (the same motor became standard in the Range Rover.) If you needed more power, you added the supercharger option (510 hp, 461 ft-lbs torque). During this period, both the New England Motor Press Association and the Northwest Automotive Press Association awarded the Sport the “Winter Driving Award” and the “Best SUV of the Year”, respectively. [During this period, in 2008, Ford, in dire financial straits due to a worldwide recession, would sell Land Rover to Tata Motors. To its credit, Tata has remained a generous corporate parent to Land Rover and Jaguar.]

The Sport’s success also enabled Land Rover to push the Range Rover into an ever-higher luxury status, profitable for the company, but further distancing it from its 1970 ancestor. The P38A had the last ladder frame on the Range Rover, as the early L320’s moved to an integrated body/chassis, with three steel subframes, and to a fully monocoque chassis in 2006.

All the L320’s and L322’s offer a sublime and/or uproarious on-road experience, without forgetting their Land Rover heritage. Two-speed transfer cases, electronic traction control, proper approach/departure/breakover angles and ground clearance assure that if you don’t mind cleaning the carpeting and polishing the paint later, your Range Rover or Range Rover Sport will take you anywhere their predecessors would go.

The fourth generation of the Range Rover, the L405, appeared in 2013, with a new aluminum monocoque platform that reduced its weight by 39% and vastly improved torsional stiffness. The Range Rover Sport would benefit from the same platform in 2014.

For the 2021 model year, Land Rover has announced a Fifty Edition (1,970 examples only), celebrating the 50th anniversary, as well as reviving the Westminster model name. Both seem a fitting tribute to the vehicle that taught us to say, “But I have a Range Rover.”