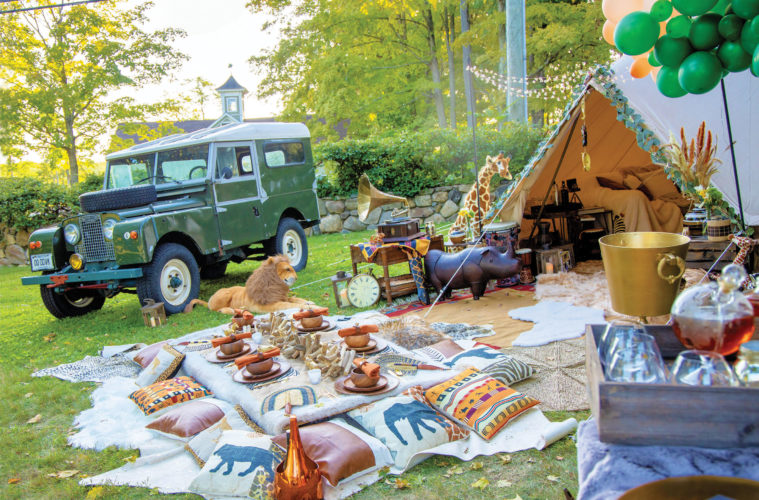 When they first met, Kelly York and Heather Cody discovered they shared a lot in common.

First off, they lived near each other in southwestern Connecticut and their children attended the same school. They both had husbands named Jonathan. Jonathan Cody has been a long time Land Rover owner/enthusiast. Jonathan York’s brother-in-law in the UK works selling Land Rovers.

Kelly had enjoyed great success as an event planner in her native UK, creating events for Harrod’s as well as numerous conferences. Heather had coordinated major celebrations such as the World Rugby Cup. It made sense to combine their creativity and event talents with their husbands’ Land Rover passion. The result is their safari-themed event company, Bella Soiree.

Heather marveled, “Creatively, our minds work well together. We’re constantly bouncing ideas off each other.” Kelly reflected that each event is “a lot of work — like moving house every time we design and set up an event. Our last one took us 30 hours.” Jonathan Cody shook his head in amazement. “They’re two of the hardest working people I’ve ever met. It’s extraordinary how much detail goes into every event.”

With Land Rovers, a ’57 Series I and a ’74 Military Lightweight, anchoring every setting, Heather and Kelly erect classic Bell Tents and create safari camp settings for socially-distance parties and dinners. Their “safari expeditions” have included Halloween, Thanksgiving, birthdays, general family celebrations, and movie nights [Might we suggest a showing of “The Gods Must Be Crazy”? -ed.]

So far, their events have taken place in Connecticut and New York, but like any Land Rover, they’re willing to go anywhere to accept any challenge. We think the concept and the company are Fabulously British.