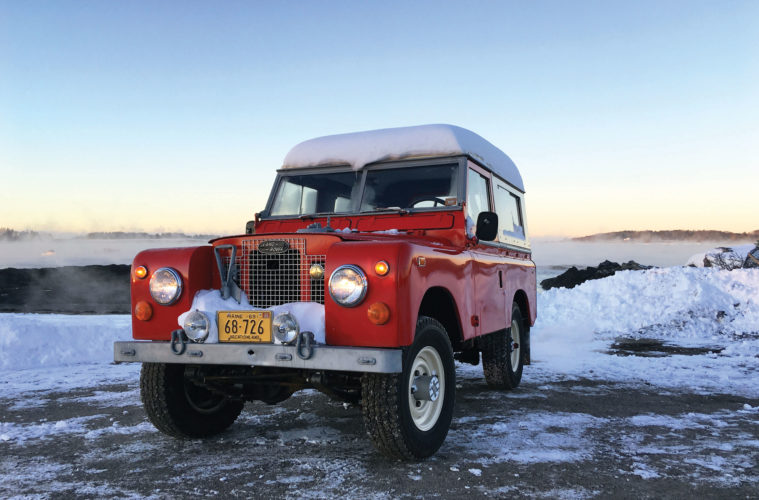 Growing up in western Colorado in the 1950’s, my father always kept a Willys Jeep for fishing trips and hunting. He would scare my siblings and me by tearing up and down the steep adobe hills that lay a few miles from our home, while we hung on for dear life. In those days people left their keys in the ignition. By the time that we entered junior high, this practice made it easy to liberate the family Jeep on moonlit nights while our folks slept. The trick was to push start across a field or down a hill beside our house before switching on the engine so we wouldn’t wake them up.

Having a 4×4 around seemed natural to us. A Jeep was like a member of the family, but I remember lusting for a Land Rover after seeing a brand- new Series II in a local showroom. From that moment on I dreamed of owning one. My chance came in the early 1970s, a few years after I was out of college. Two friends and I formed a partnership in the Colorado mountain town of Breckenridge, where eventually we did the master plan for that now-booming ski resort. In 1970 I bought a house five miles up from town, perched above a river, the Continental Divide soaring up above. A lovely spot at 10,300 feet where you could fish off the deck, but in a climate where snow was sure to fall at least ten months of the year.

A 4×4 would prove essential. I scoured the Denver newspapers and came across a ’69 Series IIA “Bugeye.” The owner had driven Land Rovers in Africa while he was doing oil exploration. He loved their versatility, even reminiscing about how good steaks could taste after roasting them on a Rover’s grille. He’d bought a new one in August, 1969, SN 24435806F, to pull a heavy camping trailer, but soon learned the Rover was too slow to pull the trailer up into the Colorado mountains. The truck sat in his driveway until I bought it in October, 1971, still in perfect shape, for $2,700.

In those years my wife-to-be, Kris, lived down in Denver. Before driving my new acquisition home, I borrowed two British Union Jack cloth placemats; When I arrived home in Breckenridge, I mounted the placemats on the Rover’s wings, like diplomatic flags. Thus adorned I bounced across a rocky placer, honking the Rover’s mighty Lucas horn and singing Rule Britannia to impress my college chums.

It quickly gained the name of “Reggie” (Have you noticed how a Land Rover will name itself?). It remained painfully slow in the Colorado mountains. I did what I could to speed it up; installed a Viper tuned exhaust, a Fairey overdrive, changed the Zenith’s jets, then swapped the Zenith for a Rochester, but Reggie never was a star on Colorado’s high-altitude highways. It was equally slow when I tied sheetrock, lumber, even aspens on the roof. Off road, on the other hand, Reggie could climb a tree.

Not far from my house an old mining trail wound up Bald Mountain to the tree line. The trail was difficult to scale even in four-wheel drive low range. I used to drive the Rover up the trail to pick up moss rocks that I used for paths around my house. The more rocks per load the fewer trips I had to make. Reggie never groaned, even when the axle straps almost touched the ground. One such day I decided to take a short cut on the way down through a copse of spruce and aspens. A huge flat-topped boulder lay in their midst. Reggie was too heavy for me to back up without discarding half a ton of rocks, so I decided to try to skate across the boulder. Reggie lunged forward with the courage of the Light Brigade (“Ours is not to reason why, ours is but to do or die”), but wound up high-centered. All four wheels dangled in the air, too high for even a high-lift jack.

As I sat down to contemplate the Rover’s fate, I saw a grader far below me working on a county road. At the time, I served as a county commissioner, and I recognized the graders as one of ours, and the driver, Charlie Wheeler. Humbly, I hiked down the mountain and begged his assistance. He gave me a look but he maneuvered that giant grader skillfully through the trees and up the mountain. When he reached the Rover, he lifted it off the rock with his center plow as gently as a mother moves a sleeping baby. I never saw another person handle a piece of huge equipment with such skill.

The fall of 1973 saw me in a master’s program in Denver. Classes began on weekends at 8:00, requiring a 5:00 am departure from Breckenridge, and drives through Hoosier Pass, east through South Park [renown for its blizzards), over Kenosha Pass to Denver. On bitter winter mornings, a block heater failed to help it start; at times, I resorted to buckets of hot water to warm it enough for the starter to crank the viscous oil (Crank starts were impossible in the bitter cold.)

On one winter morning I started out in a snowstorm, reaching the town of Fairplay at dawn. Good thing there was no traffic on the road; I could barely see the road ahead. Half way to Kenosha Pass I met a snowplow coming toward me. He hollered that the road was closed and I’d have to turn around. With the wind blowing sheets of ice into the engine bay, Reggie hesitated to start; not another soul was on the road. Ice began to coat the inside of the cab. Even the Kodiak heater, installed to supplement the tepid Smith’s heater, couldn’t keep Reggie’s cabin warm. Once the ice accumulated over the distributor and plug wires, the engine died out.

After all the mornings I had slept through class in college out in California, was I going freeze to death while trying to make an 8’clock here in Colorado? The wind blew so fiercely that it pushed the Rover along at 15 miles per hour. Save for the shrieking wind, I rolled along in silence – without any heat to keep me warm. Hours seemed to pass as I skated along the icy road, trying various gears to jump start the motor. Finally, the tires found enough traction for the jump start, the heat came on, and I made it to Denver and my class. The professor was not in the least impressed with my excuse for being late – I expect because that morning the skies in Denver were a cloudless cobalt blue.

One spring Kris and I drove Reggie down to Mexico to visit with my father, who spent winters in the town of Alamos, about 1500 miles from Breckenridge. For a long-legged guy like me, that was a monumental stretch to spend in the cramped cockpit of Series IIA. What should have been a pleasant visit devolved into a family argument, and our departure back to Colorado began nearly on the heels of our arrival. We stopped only once the entire trip home. My legs still cramp up thinking about that trip.

In 1980, Kris and I moved to Moscow, Idaho, where she finished her BA and I enrolled in law school (As a county commissioner I’d been sued so often that I, too, went to law school.) Reggie pulled a trailer full of our possessions, while Kris came afterward with our year-old daughter Morgan. Moscow is a Norman Rockwell kind of college town, lost happily in the 1950s. Our son Brian was born that year in nearby Pullman, WA0. He and Morgan grew up riding behind Kris in Reggie’s two back seats. Riding that way along the back roads of northern Idaho is still among their favorite memories.

In 1989 I joined the faculty at Rutgers Law School in Newark, NJ, but this time, Reggie started the trip strapped to a trailer behind a moving truck. When the alternator on Kris’ car failed in Montana, and another one could not be sourced quickly, her car went on the trailer and Reggie hit the road. Reggie continued in his stately manner, moving at the pace of Elgar’s Pomp and Circumstance played at a graduation. Not once did Reggie ever let us down.

We drove Reggie in New Jersey, but it very clearly missed the rust-free west. We had to replace the rear frame section and outriggers. but much of the original frame is still intact. Other wear items requiring replacement included the steering gear, front propeller shaft, brake booster, and the slave/ master cylinders for the brakes and clutch. After more than 50 years, the wiring has become a tangle of odd and ends, but Reggie soldiers on, starting eagerly when I turn the switch.

Engine work has been minimal considering Reggie’s travels. Back in ’76, I burned an exhaust valve along a highway in Nebraska. (I’ve always driven Reggie with the pedal to the floor.) In ’01 I replaced the crankshaft bearings and exhaust valve seals. In ‘86 I traded legal work for a repaint of Reggie’s original Poppy Red. Inside, I added several gauges, put a bit of padding on the dash, built a storage bin behind the truck’s midsection bulkhead, and had a couple of the seats resewn. I still have all the manuals and tools, and even the spare tire is original.

Kris and I and our two kids moved to Cape Elizabeth, Maine, in 1998. She completed her master’s degree in early childhood education, then directed the Children’s Center at nearby Bowdoin College. I taught at the Maine School of Law until retiring. Brian builds houses and drives two other British legends, an MG and a Morris Mini. When Morgan and her then-fiance were married, they left the church in Reggie. Now they have three kids, all about the same age as when she and Brian rode around in Reggie in Idaho. As you might expect, Morgan’s kids are thrilled to ride in Reggie. And why not? For half a century our family has lived through Reggie’s “Bugeyes.”