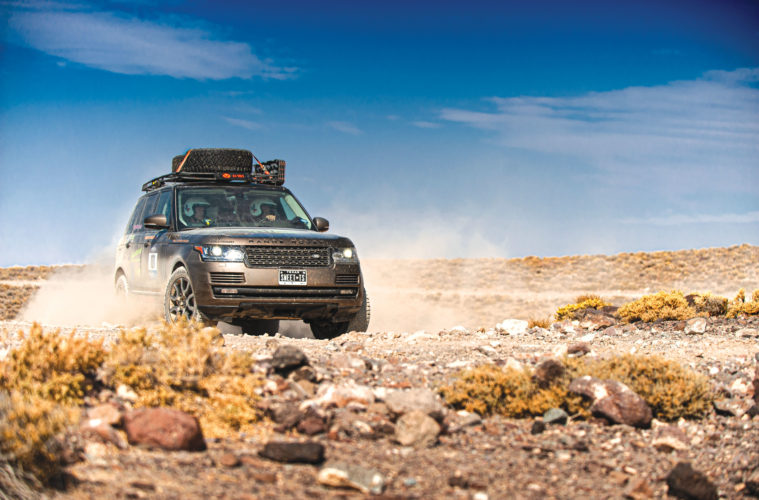 As a competitor in two previous Rebelle Rally events, the event has come to mean a lust for adventure, intense competition and a romance with my Land Rovers! Interviewing the Land Rover teams that competed in the 2020 rally made me feel as though we’d known each other forever.

This 5th year of the 10-day, 1,200-mile, women-only, off-road navigation event successfully handled pandemic challenges. It began on October 10, 2020, at the historic Valhalla locale, South Lake Tahoe, CA, continued through Nevada and ended in the 200-square miles of the Imperial Sand Dunes of El Centro, CA. Safety considerations reduced the number of teams to 36, three of which ran Land Rovers. The Rally tests competitor’s navigation and driving skills, personal endurance, commitment and communication between teammates. Just when you think you’ve got the course figured out, checkpoints seemingly disappear, or you get a flat tire – or whatever! The Rebelle is a true test of willpower.

Interviewing this year’s teams running Land Rovers confirmed my memories. Rookies Wendy Phillips and Tracie Sell, both from Wimberly, TX, formed team Sweet T + Sparks in a ’13 Range Rover. Rookies Kathryn Goacher and Julia Bigwood in a ‘00 Discovery II ran as Rebel Alliance and certainly had a few twists of fate before getting to the starting line. Karen Hoehn and Dana Saxten competed in a ‘14 LR4 as 100 % Rebelles, signifying their participation in each year’s competition.

Three years ago, Tracie Sell drove to get an oil change and happened to sit next to Channel Williams, a 2018 Rebelle who competed in her LR3. Soon afterward, Tracie read a New York Times article on the Rebelle Rally and together, those experiences convinced her to enter the event. Tracie and her husband, Phillip, founded and operate Sell Design to create custom furniture. When they need metalwork completed, they turn to blacksmith Wendy Phillips of the nearby Flite Acres Ranch. When Tracie decided to enter the Rebelle, she turned to Wendy as a partner.

Wendy had commissioned a rebuild of her ’94 Range Rover Classic, and they had intended to run the Classic in the event. However, it became clear it would not be ready in time, so they turned to Tracie’s daily driver and entered the “Bone Stock” class. As Rebelle founder Emily Miller has said, “The vehicle in your driveway is more capable than you think!”

“The Rebelle took me places and showed me landscapes I had never seen, and might never see, if not for the Rally,” Wendy said. “The many different women from many walks of life, the spirit of pushing ourselves, the amazing support we gave each other – yes, I know we were competitors, but we were always ready to help each other.”

Wendy served as the navigator and the navigational challenges surprised her. “It took so much brain power and concentration; it was most of the responsibility. The Rebelle was not a leisurely drive through the countryside. I did more detailed work in a week than I do in a month! I loved that it pushed me into discomfort. The Rebelle forced me to think about, ‘Who are you when you are stressed? How do you treat your partner?’” All this occurred during a difficult personal time in Wendy’s life.

Oh, and in addition to the eight days of competition, Tracie and Wendy had a two-day drive from Texas to Nevada each way. Wendy noted, “I have an 8-year old son, Sawyer, and leaving him for the ten days was hard!”

Tracie and Wendy practiced together over the summer; however, Tracie noted that the experience seemed to evaporate once leaving the starting line. Finding some of the checkpoints proved difficult when the team wasn’t even exactly sure which color flag [green, blue, or black, each with different point value – ed.] they were pursuing. They had also never driven in sand, which hurt them in the Glamis sand dunes at the rally’s last day. Tracie noted that, by the end, “You’re running your own rally, competing against your own strength and stamina. It’s true of the Rebelle and of life. It was a huge learning experience, learning about what I want to do – and can do. I didn’t realize I could keep my body and mind strong for the ten days, but I did. I also loved meeting all the other women!”

Kathryn Goacher, Loveland, CO, and Julia Bigwood, Westborough, MA, had both registered for the Rebelle, but a month before the event, neither had a teammate. Kathryn’s partner had had to back out, and Julia was thinking she’d really just be attending trainings. Suddenly, Kathryn needed a navigator and Julia pulled strings at Worchester Polytechnical Institute to miss a couple weeks of classes. They met at a Rebelle training outside of Yuma, AZ, and drove together for the first time at the start of the Rebelle. A Toyota Camry owner, Julia had never done any off-roading.

Kathryn and her husband, Joe, had started prepping her Discovery II a year in advance at their shop, Alliance Auto Care. “We’re enthusiasts,” she told us. “We have a ‘91 Defender 110 with 3.5 V-8, heading eventually for a full diesel conversion.” Joe said, “We founded the shop in 2009; I was a school mechanic and Kathryn was a banker. The shop brought us together!”

Kathryn had owned this Discovery, her 8th, for six years. “We fine-tuned everything from the Old Man Emu springs and shocks with a 2.5-inch lift to a rebuilt engine.” The Discovery also featured front and rear ARB air lockers and a center diff lock actuator. Every time they made a change, Kathryn would take it out on the trail and see how it handled; when the rally came around it was well dialed-in.

Julia Bigwood said, “Between Covid-19 restrictions and the lack of a teammate, I did not expect to be able to compete. Kathryn and I met up three weeks before the event. I was so excited! I dropped everything I was doing, took finals, and binged on training videos. Day 0 at Lake Tahoe was our first day together.” Julia brought her mathematics and engineering chops to her responsibilities as navigator. She’s an accomplished Aerospace Engineering major at WPI (which won her a prestigious Mathew Isakowitz Fellowship) with a minor in Music (voice and trumpet) and an avocation for marathons and triathlons.

“It was so different than anything I’d done before,” Julia said. “I’m still blown away to have that opportunity. The other thing is that it was an amazing learning experience. I’m quite the daredevil – it takes a lot for me to be nervous and scared, but I was!” She’s ready to enter again this year.

As is Kathryn. “I learned so much from my first Rebelle. Since the event I’ve run the course through my mind often. It wasn’t the conditioning or physical work that was so challenging. Julia and I were strangers, together for hours every day in a Land Rover. During the Rally I wasn’t engaging and communicating effectively. By the end, my communication skills became much stronger. Would I do it again? Yeah, I certainly will. I’m already planning on enhancements to the Discovery.”

Kathryn also wants to silence the skeptics who disparaged the Discovery II. “I let it run off my back and gave it right back to them.” Frustratingly, the only significant issue the team confronted was a disintegrating roof rack; picking up its pieces and rearranging the required kit cost them a lot of time. Given my own experiences on the rally, things don’t always go as planned, but sometimes you are too tired to notice when the first few bolts let go!

Dana Saxten, Encinitas, CA and Karen Hoehn, Del Mar, CA, have competed in the Rallye des Gazelles [France to Morocco] and have been teammates in every Rebelle Rally. Karen thinks so highly of the event that her company, Hoehn Adventures, provides sponsorship. And, she noted, “Dana and I have the best time together!”

Karen reflected, “It’s hard to believe that it’s been five years! The Rebelle still has a lot of momentum and feels like it’s still going full force. It’s quite amazing that Emily [founder Emily Miller] was able to pull it off. At any moment, the BLM [Bureau of Land Management] could have pulled our permits, but Emily and her team demonstrated they could enforce all the safety requirements. The same mask and social distancing requirements we have in our cities were in place out here.”

In reality, the Rally requires two weeks of time, from travel to and from the event, a day of tech inspection and the very emotional “Rebellation” gala on closing night. The Rebelle becomes a considerable commitment for most competitors. Business owners like Tracie and Wendy simply donate the extra time. When you have the determination to go into the middle of the desert to find checkpoints – some unmarked – you’ll find a way to manage your daily life.

Team Hoehn Adventures finished in 13th place (and won the prestigious Team Spirit Award), Sweet T + Sparks in 24th and Rebel Alliance in 25th. There were 36 teams competing this year, a significant reduction due to the pandemic.

Impressively, the Rebelle Rally is one of the few events that was able to take place this year, but not without a good number of safety protocols in place. The rally has never been a spectator event; however, competitors and staff took the required Covid-19 tests, ate meals in shifts and found every activity spread out to enforce social distancing.

I’ve registered for the 2021 Rebelle and I’m counting down the days until competition begins next October. Many of the competitors have become my friends. For me, part of what keeps me going back to the Rebelle is the camaraderie amongst this “tribe.” Even in a chaotic year like 2020, the Rebelle Rally remained resolute and vibrant – like its competitors – in support of the new tribe that crossed the finish line.