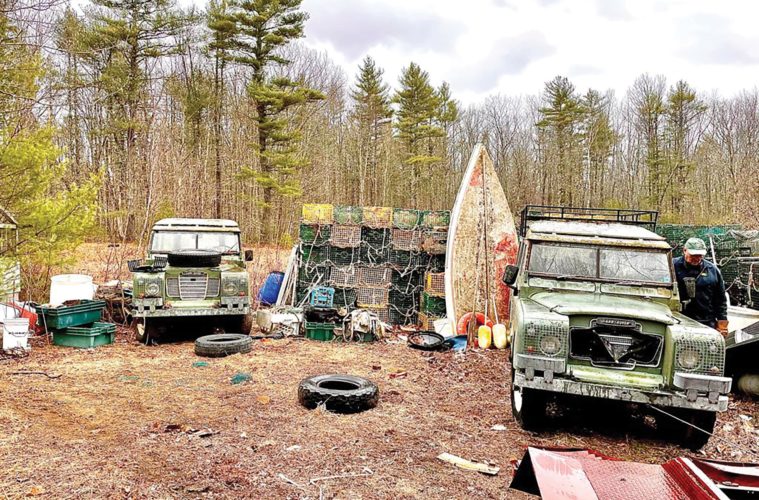 From One Hoard To Another

As a kid growing up in Newfoundland, I was obsessed with Series Land Rovers. The thing that I remember most, was that if someone owned one Land Rover, there were usually several others in various stages of disrepair somewhere on their property. At the time, I didn’t recognize it as “hoarding,” but that’s exactly what it was. Jump forward 40 years and I see Land Rover hoarding all around me – and I’ve become a Land Rover parts hoarder myself.

As a Land Rover enthusiast, I have several like-minded friends who keep a constant ear to the ground, waiting to hear of a Series stash tucked behind a barn or down a path in the woods. Sometimes, they even hear of someone with multiple Land Rovers and an accompanying parts collection who decides to liquidate their inventory in order to simplify their lives.

Last month, several of those instances occurred simultaneously and I had the pleasure of stringing them together for an epic road trip that logged over 1,700 miles – across eight states – over four days.

Late last Fall, 2020, my friend Matt told me that he was buying a right-hand drive Series III 109” from Dave Depasque in Pennsylvania, but Matt ended up getting trapped in Newfoundland due to increased Covid restrictions. In early April, 2021, I decided to help him out and go retrieve the truck for him. (Also because, selfishly, I wanted the Salisbury rear-end for my current 1961 Series IIA 109” build.) Matt said he was going to modify the truck and had no need for the axle, so I jumped at the chance. I called my buddy Glenn Parent, Woodstock, VT, who has a trailer and was up for the long drive down to Pennsylvania to bring the 109” home.

While this Pennsylvania run was in the works, two of my other friends, Sean Shabab and Mike Capozza, were on a hunt to track down Mike’s father’s ‘73 Series III 88”, one that his dad had purchased new from a dealer in Portland, ME. In 1975, Mike bought the truck from his Dad; eventually Mike sold it to a local lobsterman in 1989 to help buy his first house. Through some sleuthing, Sean helped him track down the person that bought Mike’s Series III and – low and behold – the lobsterman still owned the 88” – along with four other non-running Land Rovers. Finally ready to part with them, he offered Mike a great package deal.

Now the mission was set. Glenn, Sean and I left Vermont early in the morning on a Thursday and drove to Depasque’s house in Southern Pennsylvania to pick up the first 109”. Upon arrival, Dave offered us access to a couple of sheds containing other available Land Rover parts. Between the three of us, we ended up with deluxe bonnets, body panels, a winch, gauges, seats, wheels, etc. Parts were crammed into every nook and cranny that would accommodate them, including the engine bay of the 109. Sean even sat with an NOS wing panel across his lap. Once completely loaded, we headed back to Sean’s house in the Catskills of New York, arriving at 2:00 am.

Feeling as if we hadn’t slept a wink, we were on the road again at 7:00 am Friday morning, headed back to my shop in Brattleboro, VT, to offload the 109” and the collected parts. Next stop – Capozza’s house in Portland, ME. We spent the next two days with him, visiting several other parts hoarders as well as recovering the remaining two Land Rovers that were part of the group containing his father’s Series III. Mike was only interested in keeping his dad’s 88”, a Series IIA 109” that originally belonged to his friend, Bill Vallerand, and a Range Rover Classic. The other two, both Series IIIs, an 88” and a 109”, came to us because Mike is overwhelmed with several projects and we convinced him they would be in good hands. Both of the Series IIIs are perfect candidates for restoration projects with very straight panels and many added features, such as a Brownchurch roof rack, Warn locking hubs and overdrives. On Monday morning, feeling fatigued, we pulled back into Brattleboro with the next load of Land Rovers and parts. At the time, I remember saying that I never wanted to do that kind of trip again – but now, one month later, I’m already looking forward to the next.

When we acquire Land Rovers and parts, it’s not out of excessiveness or greed, but rather for the enjoyment of ‘the hunt’ for these objects. Couple that with good friends going far afield on an adventure, and it makes for a fun and memorable Land Rover-related experience. In most cases, the ‘the hunt’ is better than ‘the kill.’ Once the pile of derelict parts builds up at the shop, I wonder if it was worth tracking them down in the first place. Ultimately, the answer always seems to be “yes.”

On the way back to Vermont from Maine, Sean and I recapped the entire trip. He told me that our mission was successful because we are saving all of these Land Rovers and parts from fading into oblivion. He said that in 20 years or so, all of these old-time hoarders will be gone and the parts won’t exist anymore.

I had to correct him by saying that we (and enthusiasts like us) have become the same hoarders that we seek out now.