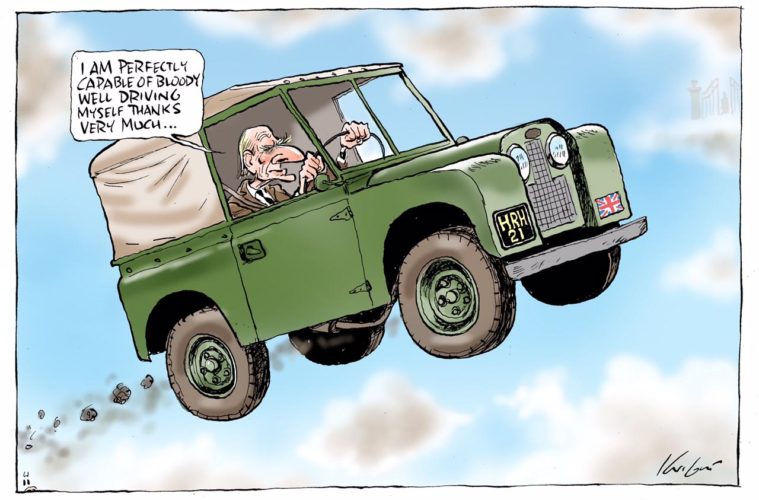 Behind the Steering Wheel – Spring 2021

The death of Prince Philip, an ardent supporter of Land Rover and the British auto industry in general, received attention worldwide. A brilliant editorial cartoon, attributed to Warren Brown of The Daily Telegraph, Sydney, Australia, quickly made the rounds on social media. I sought permission to share the cartoon in Rovers Magazine and received this most fascinating reply:

“Thank you for the inquiry. Actually, I did not draw the cartoon – which is terrific – it was drawn by my Melbourne counterpart, Mark Knight, from the Melbourne Herald Sun – a dear friend and colleague.

I was on vacation during Philip’s demise and Mark’s cartoon was used in my place here in Sydney. But so as not to miss out, I drew this cartoon of Philip, Prince of Land Rovers, especially for you and your readers.”

“Ironically, I am a Land Rover enthusiast and collector – I own five Land Rovers – a 1969 Australian Army IIA, a 1971 IIA pick-up, a 1978 Australian Army SIII, a 1992 Defender 200 Tdi pick-up, a 2013 Defender Puma and a 1991 3.9 Range Rover Classic. It was a long time ago, but I attended the launch of the first Discovery in Australia where Arthur Goddard was the guest speaker [see Spring 2020 issue – ed.] – I remember him telling a story that they’d received a complaint from South Africa about the ’new’ Land Rover, where if you had the vehicle in full lock to the left and floored it full-throttle in reverse – driving flat out backwards in circles – the gearbox or differential or half-shaft would break. I remember him saying they were wondering why on earth anyone would even think of doing that!”

“As a boy, I’d read books my Dad would borrow from the American Library in Sydney – something attached to the US Friendship Association – and one of my favorites was a children’s book called One Morning in Maine – books like these inspired me to become a cartoonist.” [Robert McCloskey lived and wrote from Maine; his other famous children’s book was Make Way for Ducklings, set in Boston -ed].

Mark Knight and Newscorp gave us permission to share his gracious take on the Duke of Edinburgh in this issue. Thank you, Mark and Warren, for sharing your considerable talents!

Finally, I had an excuse to get behind the steering wheel and actually drive somewhere other than around this island. JLR invited me to join a Media Drive in the new Defender 90 [See page ___ – ed.] leaving from their headquarters in Mahwah, NJ. The 388-mile trip would take about 7 hours (plus a 1.25-hour ferry ride), which led me to question which Land Rover to choose as transportation.

Each Land Rover presented me with an “issue.” The QE I (’66 Series IIA 88” SW) has made similar trips several times in my 30 years of ownership, but right now, it’s set up as a canvas top. That meant items stored in-car, like the mandatory toolbox, might not be secure. Rickman (’67 Series IIA 109” SW) needs to have its windshield wipers working, and the weather forecasts called – accurately – for rain. Rain-X might work fine in lieu of wipers on local drives, but it’s less effective on highways. Don’t ask me how I know.

This left Gilroy (’97 Discovery I SE7) as the best candidate. Its 4.0L V8 has only 138,000 miles on it and, back in February, had received new spark plugs and wires ordered from Rovers North. Each of the existing plugs looked quite clean, hinting that the innards of the engine remained in good shape. My code reader had identified a misfire on cylinder #7 and, sure enough, that spark plug wire had a cut at the coil pack end. Since I had use of a garage for this maintenance, I treated Gilroy to a filter and oil change with fresh quarts of 5w-20.

This choice should have been a drop kick, but Gilroy had developed the automotive equivalent of belching at the dinner table. When I applied the brakes, a great squeal emanated from under the car. Not an occasional, gentle screech, but a banshee howl that announced to the entire island that I had just pulled to a stop. Onshore, dogs cowered in fear; offshore, whales fled to deeper waters.

I had replaced the rear calipers, pads, and rotors less than a year before, so I replaced the front pads, cleaned the rotors of some rust, and lubricated the caliper pistons. Using all my automotive intuition and judgment, I determined that the noise still came from the front brakes. Without access to a garage, I had to take the Discovery to a shop to replace the Rovers North calipers and pads. But when we road-tested the car, the mechanic and his apprentice determined that the noise came from the rear. Hmm… The rotors and calipers rotated smoothly, but the mechanic had run into this problem before. He swapped out the pads between the inner and outer sides, on both the left and right-side calipers. I drove away silently – go figure!

That solved problem #1, but a second problem would rear up during the trip. As I drove south, the weather warmed up considerably to “window down, sunroof open” temperatures. Pulling into a rest area along the Massachusetts Turnpike, the oil pressure warning light suddenly flickered at idle. Adding a hundred rpm turned off the warning light. Very worried, I checked the oil level and found it up to the full line. I didn’t see any leaks and pondered the life of an oil pump. I calculated the mileage limits of my AAA membership, started up the Discovery and continued on the drive. When I came to a stop at my hotel in New Jersey, the light flickered again at idle.

(Like any good murder mystery, there’s an important clue hidden in the narrative.)

A few phone calls later, I realized my error. 5w-20 oil is recommended for cold ambient temperatures, like Maine in February, but not for warmer temperatures, like New Jersey in May. I found a shop to change the oil to a heavier viscosity and haven’t confronted a flickering light since.

While I gloat about my 8-hour drives behind the steering wheel, I know they pale compared with the cross-country drive of David Short and Mike McCaig in the Oxford Series I [see Winter 2021 issue -ed.], or Ray Hyland and his family’s drive across Europe and Asia in their Series I [see Winter 2020 issue -ed]. However, those were planned journeys. For sheer surprise, the behind-the-steering-wheel time of Rovers Magazine correspondent Therese-Marie Becker, St. Simon, France, takes the cake.

Therese-Marie, a digital marketing specialist, served in that role for “The Last Overland,” London-Singapore expedition, run from August–December, 2019. She expected to tell the story remotely of the 12,000-mile drive in the rebuilt Series I first described in Tim Slessor’s superb book, The First Overland (RN #Book72). Two support Defenders followed Oxford on her journey, so the seven-member team (one, a New York City resident without a driver’s license) had to split driver’s seat time between the three Land Rovers.

Therese-Marie recalls, “In July, 2019, the team began to speak vaguely of me traveling with them for a short distance; not knowing how long I’d be gone, and assuming I’d be in a tropical climate, I packed lightly. My only certainty was that, before my departure, I had 12 days of work in London and a trip to the most remote part of Scotland to help my little brother. Only then could I scramble to return to London and start my three-day journey to Singapore.”

“That’s where I learned that I was to become a driver of Oxford. I had learned to drive in an old Army truck in my home country of Belgium, but I had never driven a Series Land Rover. Initially, I would be helping as a driver only to China, but once we entered China, the team decided that I should continue and I became the only female on the team – the only woman in a Series I Land Rover for 111 days. ”

When asked what that was like, Therese-Marie deflected the subject and noted,“Oxford turned out be like a temperamental woman. You always loved her in the end.”

Island residents have a good read of my mechanical “challenges,” so you can imagine my surprise when Callie McKay, who works on a lobster boat, called to request my help with her 2016 Range Rover Sport. It would not shift out of Park, and the choice was to spend vast sums of money and considerable aggravation to have it towed onto the ferry for an 80-mile trip to the one dealer in Maine – or call me. Wiser enthusiasts consider that having me work on their vehicles would constitute a higher level of aggravation and potential cost, but Callie needed her car and figured, “The worst that could happen is that you’d break something else and it would have to be towed off anyway…”

I spoke with Justin Alley, the Parts Manager at Land Rover Scarborough, who insisted the job was “easy” and he even had the part in stock. Watching a couple of online videos confirmed that, for some people, Justin’s assessment was correct; the online presenters made it look easy. I’d experienced a similar problem with my Discovery I; the fix involved sliding a $2.00 metal clip over the flange on the top of a rod. By 2016, Land Rover had decided to go all plastic and electric with this $120 part, but to my delight (and Callie’s relief), the failed part snapped off the top of the shift lever and its replacement really did snap back into place. The Range Rover shifted perfectly then and continues to work well now.I wanted to bask in the glow of a successful (for a change) repair, but Callie denied my effort at a stage bow and dismissed me. Sigh.