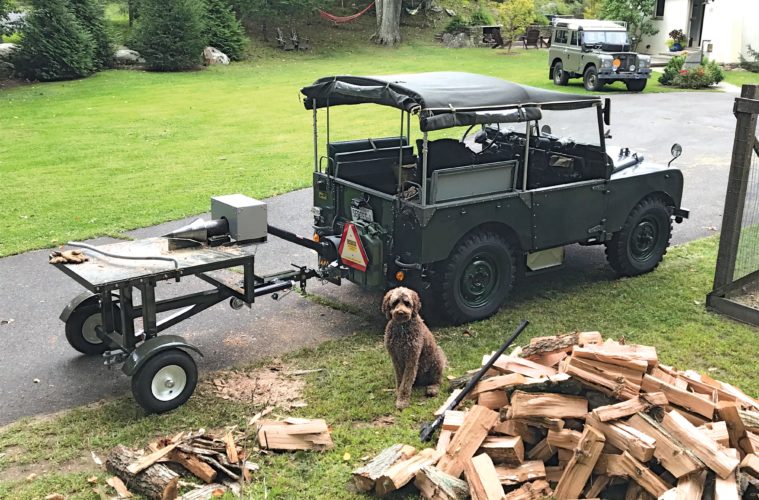 It’s been a long time (the late 1980s) since my ’50 Series I has been up to Rovers North, but it’s still earning its keep. During the pandemic, we experienced some winter storms that brought down several oak trees on our property. Rather than buy a stand-alone hydraulic splitter, I decided to investigate a PTO-driven auger splitter. They’re rare in the US but popular in Southern and Eastern Europe. I found that a company in Poland produced a kit to construct one, purchased it, and designed the PTO attachment myself. The only work I had to do was to add shims to the PTO bearings. The auger splitter can be dangerous, but once I got the knack of it, it’s been very productive.

The British farmer of the 1950s had it right – use your Land Rover as your motive force rather than maintaining multiple small engines!

[We’re envious of your PTO-driven splitter and the capstan winch on your Series I, as well as your well-used but handsome Series III! -ed.]

I visited my 98th country in December 2020…. the United Arab Emirates. I had to leave my 1980 Series III at home, but while taking a road trip through all seven Emirates I found this beauty in Ras Al Khaimah. Oil spots can be seen beneath it… confirming that it’s an original Land Rover. Wink wink.

[We’re curious as to which countries you visited in which you didn’t see a Land Rover. -ed.]

I am proud to submit that my ‘91 Defender D90 was used in this year’s Vineyard Vines Holiday catalogue. The picture used was actually taken on Nantucket in Massachusetts. This Defender is a right-hand drive 200 Tdi 5-speed, originally from Ireland.

[Congratulations on the prominent placement of your Defender! – ed.]

Wren and her twin sister Rory just turned two years old last week. As my office is just across from the nursery, they like to come in and look at the back issues of Rovers Magazine.
Keep up the good work; we enjoy your articles and stories. Rovers North has been a good parts source for me since I bought my Land Rover back in 1976.

[Reading Rovers Magazine at age 2 will undoubtedly lead to admission to an Ivy League-level university, as well as obligating you to buy the twins a Land Rover. -ed.]

In the latest copy of Rovers Magazine, we noticed the page of tire covers, especially the one with the cheetah. It brought to mind an old photo of our family cat, “Yoda,” in his favorite perch on my ’73 Series 88”. We all thought his choice of resting spot was great and your tire cover ad brought back memories.

[Cat lovers, like Thompson Smith, our Creative Director, insist that they are the most brilliant of pets. Yoda seems to prove them correct. – ed.]

When Grandpa got a picture message from his granddaughters titled, “Our Gingerbread House,” my thoughts were, “This is something for Rovers Magazine.” They were inspired since their brothers worked with me on a Land Rover restoration. Over several years, a derelict 109 wagon became as new again. The girls told me next year the Gingerbread 109” will have LED lights to top it off, and the boys hope to be driving the real one around. I took the boys to Rovers North when we picked up the new frame. They know Rovers North well from all the parts that came later. It is great to see the next generation getting so involved.

[We can’t tell which would be more tasty, a Gingerbread 109” or a restored real one! Congratulations on sharing your enthusiasm with your children and grandchildren. – ed.]

Our 1998 Defender saved us during a winter snow event. This was taken in front of our home/office.

[Wait until you experience a Northern New England winter. That will show you what a Land Rover can really do in the snow! -ed.]

I was getting my second vaccination and saw that a CVS in Worcester, MA, was selling these Lego sets. It looks like a Land Rover to me!

[It certainly looks like a new Defender to us! -ed.]