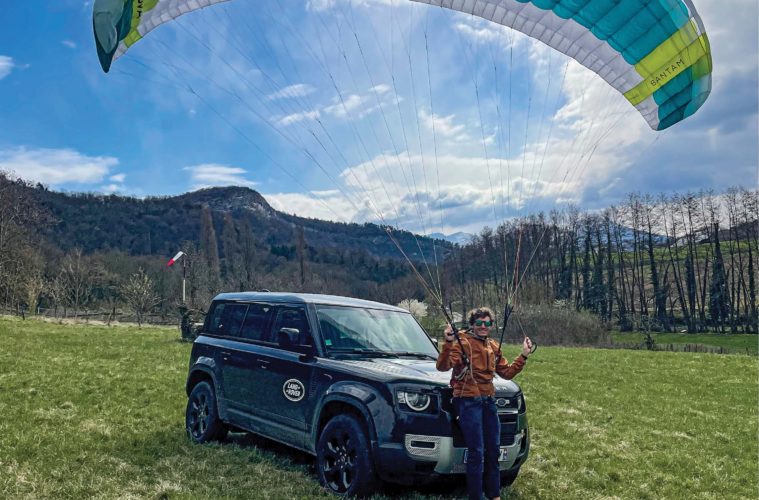 If you’ve flown across the Alps, you’ve witnessed their majestic impact. Now imagine traversing 1,100 km of them by paraglider, in a 10 day race against over 30 international competitors! Welcome to the 10th running of the Red Bull X-Alps, which begin on June 20, 2021.

The X-Alps race begins in Austria and crosses through Germany, Switzerland, France, and Italy before ending in Austria. Athletes must travel exclusively by paraglider or on foot (carrying their paraglider) to arrive at specific checkpoints. It’s a highly grueling adventure race, which is why Land Rover has signed on as an official race partner.

Land Rover France will provide a Defender as a support vehicle for French competitor Theo de Blic. Rovers North will support New Hampshire’s Eduardo Garcia in his second run at the Red Bull X-Alps. Hailing from Mexico, Eduardo is an engineer who first learned to paraglide in 2010. A champion mountain biker and race car driver, Eduardo progressed quickly and soon set local long-distance paragliding records. Competing under the flag of his home country, he finished a very respectable 16th of 33 against the world’s best paragliding pilots.

Calef Letorney of Rovers North has been paragliding since 2005 and is a USHPA Master rated pilot and Advanced instructor. “Paragliders are the world’s smallest and lightest manned aircraft. Made almost entirely of fabric and lines, the wing and harness fold into a backpack for easy transportation. Average paragliding equipment weighs just 30lbs and is the size of a duffel bag – lightweight gear folds to the size of a loaf of bread, weighing just 3 lbs! Paragliders launch by pulling the glider into the wind, controlling it like a big kite, then running off an open slope. Without a motor, paragliders attain altitude and flight time by piloting in currents of air that rise faster than the glider’s descent rate.”

“Don’t let the small form factor fool you; in the hands of an expert pilot, these little wings can produce incredible flights. By gaining altitude in thermals (invisible columns of rising air caused by solar heating) and then gliding to the next thermal, paraglider pilots can cover great distances and stay in the air for many hours. (The current world record is 365 miles over11 hours.) They are always dependent on the weather.”