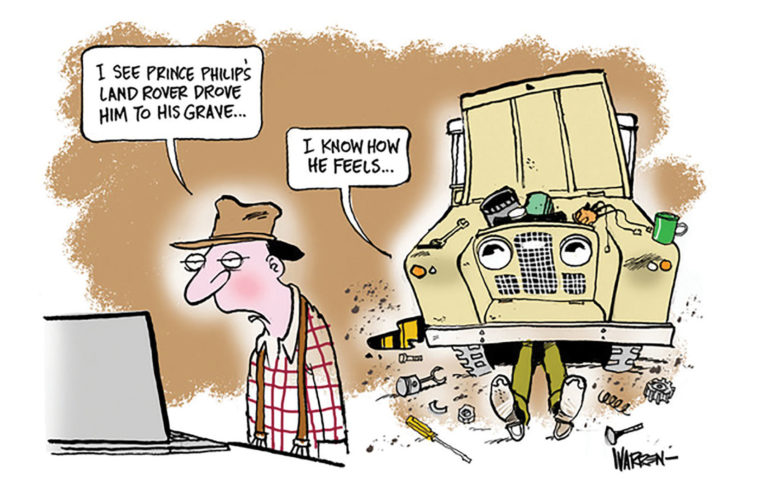 Behind the Steering Wheel – Fall 2021

Warren Brown, an editorial cartoonist, and Series I owner in Australia graced our last issue with his reflections on the passing of Prince Philip. When we sent him a copy of that issue, he responded, “I’m just writing to thank you so much for sending me the magazine – and you were way too kind to both Mark [Knight] and me! It’s a terrific publication – I’d not seen it before but I enjoyed every page of it!”

“I was telling a mechanic mate of mine about this cartoon. He thought it was hilarious and asked me if I’d draw one up for him. It’s hanging on his workshop wall. Better than the Louvre!” We agree and hope that Warren will continue to share his considerable talents with his new American readers.

As you gaze at the photo below, likely with revulsion, bear with me – a Land Rover connection does exist.

Between 1975–1981, Triumph kicked out 114,000 of these TR7s, and an additional 2,000 V8-powered TR8s. British Leyland owned Triumph and Land Rover [along with MG, Austin, Morris, Wolseley, Riley, Jaguar and other brands]. In its wisdom, the company moved Charles Spencer “Spen” King, a key engineer behind the Range Rover, to help Triumph design its last sports car.

Spen King gave the simple car a supple suspension with a lot of wheel travel (sound familiar?), and later would install the LT77 5-speed transmission (sound familiar?). In 1980, he helped put the Rover 3.5L V8 (sound familiar?) under the hood. The door handles, interior directional and wiper wands, to just name a few fitments, came right out of the parts bin shared with Land Rover.

None of this, however, could mask the effect of the controversial “wedge” styling by Harris Mann – the plaid seats and door cards, the all-plastic fascia, the massive “rubber” bumpers or the au courant pop-up headlights. In the words of Richard Porter, the author of Crap Cars, “If this car was a ‘Triumph,’ imagine what a failure would look like.”

Nonetheless, I’ve owned two TR7s over 17 years, my most recent being the ’77 coupe pictured here. On a June weekend in Vermont, it joined 20 other wedges, most of them TR8s, brought together by The Wedge Shop, Taunton, MA. Woody Cooper and his team have a well-earned reputation for injecting magic into Rover V8 and LT77 transmissions.

On my long Sunday drive back to Maine, I began hearing an unusual noise from the transmission when in 5th gear. Shifting down to 4th – a direct drive – reduced the noise considerably, which did not comfort me. By the time I reached far Southern Maine, my discomfort had increased substantially, and I pulled into a rest area to investigate. Underneath the car I saw a pool of fluid – never comforting. And I still needed to head North, in the opposite direction of help from The Wedge Shop.

That’s when Good Samaritan Jim Cronin, Kittery, ME, pulled up alongside of me and offered me the refuge of his shop. A mere 5-minutes drive away, it allowed me to check on the fluid level in the transmission [same innards and pump as used in the Discovery I]. A call to our mutual friend, Matt Browne of Overland Engineering, produced a hand pump and some ATF (as well as the dire prediction that the transmission would likely need a rebuild). As the transmission had plenty of fluid, it became clear that tow to The Wedge Shop in Massachusetts would be required. A call to AAA (a British sports car owner’s best friend) confirmed that my membership would cover the 100-mile tow and they would arrange it for the following morning. Thinking I was all set, Jim, a genuine car guy, offered to give me a 50-mile ride to a hotel in Portland. From there, I could take the one daily bus that goes past my ferry terminal, 80 miles to the Northeast.

All set? Not quite – actually, once I arrived in Portland, AAA said that a towing company might insist on my presence with the car, now 50 miles away! That prompted me to contact Land Rover enthusiast Ryan Swett, who lives aboard his boat in Portland’s harbor. Years ago, we had met on my island when he sold his Series IIA to a seasonal resident. Naturally we wound up at a bar exchanging stories of adventures and the mechanical challenges presented by our vehicles.

This day, when I asked Ryan if he knew of friends who might want to become a personal Uber, instead, he became a Good Samaritan and quickly drove me back to the fallen Triumph. Naturally, the tow truck driver said he didn’t need me present at all. So Ryan and I drove back to Portland, where I planned on catching a bus up the coast. Nope – Ryan drove me the last 80 miles to catch my ferry.

Wait, there’s more. After the TR7 received a rebuilt LT77 transmission from The Wedge Shop, I needed to retrieve it. A bus or train trip south would take up most of a day. However, by private plane, the trip would take under 90 minutes from takeoff in Maine to landing in Massachusetts. The flight came courtesy of Good Samaritans Daniel and Suzanne Cross. I’d like to believe the gift of the flight arose from my gift to Daniel of a Land Rover off-road demonstration ride at the Washington Auto Show a few years ago – but it might have just been pity.

The moral of this story is, when I call for help, run!

This summer has witnessed quite an inundation of visitors to every corner of New England. Given the centuries-old popularity of Vermont’s Green Mountains and lakes, New Hampshire’s the White Mountains, Massachusetts’ Cape Cod and Berkshires, Connecticut, and Rhode Island coasts, the summer population increase is no surprise. Yet when the boom reaches this Maine island, well, that’s a surprise. I was graced by visits from Land Rover enthusiasts David Short, Sterling, VA, the president of Rover Owners Association of Virginia (ROAV), and Bill Schofield, Skippack, PA, whose Pitch Enterprises specializes in Land Rovers.

With the new crop of vacationers and visitors came a new crop of Land Rovers. I’ve waved at three new Defenders, several LR4s and LR3s, a couple of LR2s, a Discovery Sport, and even a few Range Rovers. My wave hand and arm have never been this busy. I’ve accosted each Land Rover visitor to determine whether they’re enthusiasts. (Think of the stereotypical kids who greet cruise ship passengers in far-off places – that’s me around visitors in Land Rovers!)

Locally, there’s been a boom in Land Rover ownership, too. The Discovery II population has doubled from one to two. A Series III, owned by seasonal resident Scott Hamilton, returned quite handsomely refurbished thanks to the talents of Resurrected Rovers, Chocorua, NH. Paul and Sharon Mrozinski had previously owned a Series III and a NAS Defender 110 and returned to the Land Rover fold by importing a RHD Series IIA from the UK. With these additions, the island’s Series population stands at five. We can even boast of two [!] Range Rover Sport owners.

Can it be long before our per capita Land Rover ownership rivals that of Manhattan?

Kids adore Land Rovers, particularly the heritage Series and Defenders owned by many of us. The side view of a Series I might be the first sketch a child can accomplish when they first learn to draw. (Unlike our Creative Director, Thompson Smith, I never progressed artistically past those flat sides.) Whereas kids earn a dirty look when they stand on the leather seats of the family car, they receive praise when standing on the seat squab of a Series Land Rover. The jungle-gym nature of a Series or Defender bumper – the flat surfaces of the wings, the tire on the hood, the rear jump seats or benches – all make sense to kids as perfect places to clamber.

Recently, I parked my 109” in front of the EMS station on our main street, not realizing I had installed an impromptu play area. Parents walking to the ferry terminal, their kids in tow, found the youngsters transfixed by even a Land Rover as “patinaed” as mine. I gave the go-ahead to the parents that their kids could jump inside, ogle the all-metal dash, try each door and bench and soak in the experience. Hopefully, no one missed their ferry in the process.