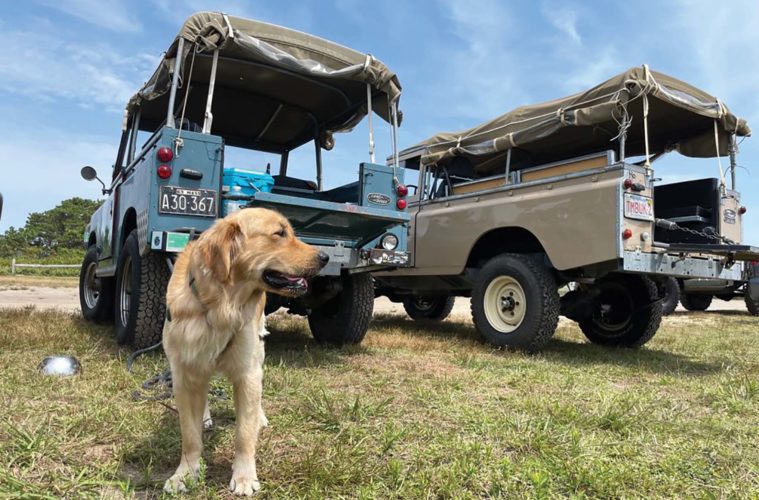 Back in early March, I was contacted by someone who had what seemed like a ludicrous idea of hosting a Land Rover gathering on Martha’s Vineyard over the first weekend of August, a.k.a. the middle of Summer. For those of you who are not familiar with Martha’s Vineyard, it’s an island that belongs to the State of Massachusetts, where Jaws was filmed, and ex-presidents and movie stars have summer homes… Every year, the island’s population explodes from 15,000 year-round residents in the winter to 115,000 during the summer. Getting around can be quite hectic with overcrowding, traffic jams, and people walking on the roads – but the biggest challenge is actually getting over to the island at all because of limited space on the ferries. The ferries are generally overbooked, and obtaining passage is quite rare. After trying to book a fare for myself in March – for August – and seeing “Sold Out” on the Steamship Authority website, I figured that this trip would never come to fruition.

Between April and July, I had many calls with the event organizers, Cooper Murray and Chris Fotta (and Chris’ fiancé, Chloe Benoit). Slowly but surely, the details of the event started to take shape. The “Vineyard Series” was set for July 30 through August 1, 2021. The organizers had somehow managed to secure approximately 40 spaces on the ferry (!) for round-trip passage to and from the mainland. The event itself didn’t involve any off-roading as such. It was more of a gathering of Land Rovers with people from all walks of life, drawn together by their love of these machines in a beautiful island setting. If only every ludicrous idea could have such great results!

My wife Robin and I arrived in Woods Hole, MA, on Saturday afternoon in our 1995 Defender 130 for our crossing. The ferry had six or seven other Land Rovers on board, and we all knew where we were headed. When we debarked in the town of Vineyard Haven, our good friend and local resident, Leif Counter, was waiting for us on the dock in his Series III 109. He took us on the scenic route to the old Katama Airfield in Edgartown, where the first (informal) portion of the event took place. Unlike the main Martha’s Vineyard airport, this airfield is for the hobbyist flier, so it’s very laidback with vehicles parking close to the planes. We arrived fairly early, but within half an hour, the whole parking lot was brimming with Series trucks and first-generation Defenders. It was cool to see little planes landing against the backdrop of Land Rovers right at the edge of the airstrip. The milling began with show-and-tell over each other’s vehicles, add-ons, modifications and hopes of future projects. The airfield has a trendy little restaurant called the Katama Kitchen, which offers a variety of dishes and beverages. The whole vibe was a great, easy-going welcome to the island. There were many meet-ups and drives around the island that evening, due to a group thread created by the organizers. It put attendees in touch with each other to create their own adventures, with suggestions of things to do and see.

The Vineyard Series’ main event was held Sunday morning at Nomans Restaurant in the seaside town of Oak Bluffs. The parking lot was cordoned off for Land Rovers only, which wasn’t a problem, as the gathering started hours before the restaurant opened. By 9am, the whole lot was full and I was in absolute awe to see so many Land Rovers in one place. Couple the number of Land Rover owners that live on the island with the ones from off-island, the number in attendance was an astonishing seventy-five trucks. Included were forty-three Defenders, eighteen Series trucks of mixed vintages and a sprinkling of older Discovery and Range Rover Classics. Of the forty-three Defenders that were present, sixteen of them were NAS Defender 90s, all meticulously polished for the event. I’ve been to other gatherings with impressive numbers of Land Rovers, but to see this many tightly packed into one place was inspirational.

The restaurant opened a little earlier to accommodate the captive crowd, which spilled into the large green space off the back of the building. The menu was perfect, with a little something for everyone (including a lobster roll for me). There was much catching up for old friends, and opportunities for the making of new friends. Shortly after noon, all the drivers headed back to their Land Rovers in the parking lot to gear up for the police-escorted parade. The Oak Bluffs Police Department blocked off the road for everyone to exit the lot, with another police car at the front of the line. The spectators along the route were enthusiastically waving as the convoy of aluminum filed past in an orderly fashion. Upon crossing the bridge into Edgartown, the line of vehicles was passed off to the Edgartown Police Department, whose members guided the group all the way through the crowded town, without regard for traffic signs, and brought the group out to South Beach. At the final beach destination, everyone parked and said their goodbyes, and many regrouped for smaller island-touring exploits for the rest of the weekend.