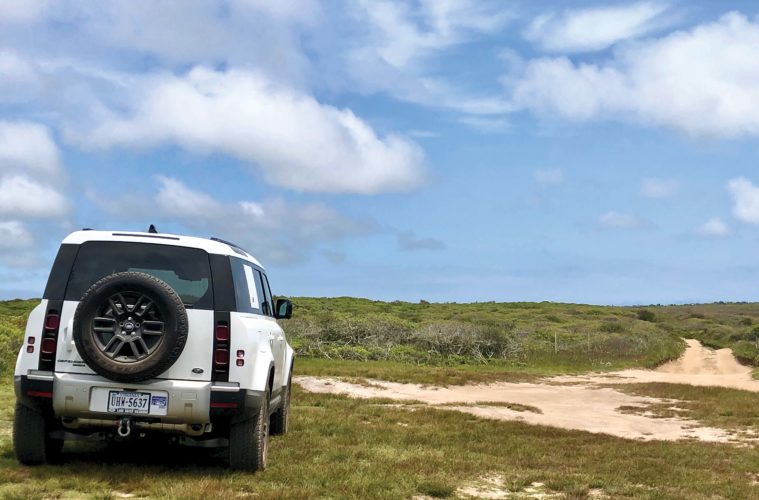 After the New Wears Off

An architect in Richmond, VA, Bob has been off-roading in all of his Land Rovers for decades. His Range Rover Classic, dubbed “Forge On,” became a staple at events run by the Rover Owners Association of Virginia (ROAV), for which he’s served as president, a board member, and an active volunteer. Not surprisingly, he’s also been a staunch advocate for the Land Rover marque.

“I really loved my three different Series Land Rovers,” Bob said in a phone interview. “I was a naysayer about the NAS Defenders of the ‘90s. Coil springs, big engine, soft top? ‘Why mess with the Series formula?’ I wondered. I actually never owned a Defender because I skipped that generation.”

When the new Defender became available, Bob decided to take the plunge; his 2020 Defender 110 turned out to be the first one delivered in central Virginia. The pandemic and its worldwide impact on manufacturing and delivery delayed its arrival; his 110 arrived at its European delivery port in March 2020, but didn’t make it to Land Rover Richmond until June 9.

25,600 miles and 15 months later, Bob and his wife Robbin remain delighted with their latest Land Rover.

No sooner did Bob take delivery than he and Robbin embarked on a 1,200-mile roundtrip journey to Nantucket for an extended vacation. In a phone interview, Bob recalled, “I was very grateful to Matt Bigelow and his Land Rover Richmond staff for prepping and delivering the Defender for our trip.” Nonetheless, there were oddball issues to sort out. The clock kept reverting to UK time and the text appearing on the center screen seemed to be one of the many East European languages. Apple Play would not work initially, nor would the personal recognition capability. Fortunately, the dealership managed to secure the software fixes. [Since then, Bob noted that the over-the-air updates have been seamless and no additional issues have arisen. -ed.]

“The many cameras, the ability to manually control gearing in low range and determine which lockers are engaged is sweet!” Bob noted. Robbin appreciates “the comfortable seats, the roomy interior with plenty of space for our dog and all of our gear.” “The fold-flat rear seats make for an incredible amount of space,” she recalls, “and the many charging/USB ports are also very handy. We love the open front dash and ability to stow things.” For Bob, “there is little doubt our base-level upholstered interior with no sunroof is perfect for us. I also appreciate the 6-cylinder P400 Ingenium engine, the air suspension system, and its ability to adjust automatically to so many driving and towing circumstances.”

“Of the 30-plus Land Rovers I have owned over the last three decades, this is the best package for my needs. While our Range Rover Autobiography is far more luxurious and offers a smoother ride on the open highway, I prefer the Defender.”

“I could have sold a dozen of these on Nantucket,” Bob observed. “Everywhere we went, there were plenty of admirers. So many people took pictures and wanted to learn about it. No exaggeration – at least 100 people stopped to take pictures and talk to me about it. Locals drove from all over the island to see it. Word got out about it and each day people would be stopped in front of our rented cottage – many of these locals are die-hard Land Rover enthusiasts. The only negative comment I heard was about the ‘odd white box’ on the rear glass. Overall, there were rave reviews.”

Bob’s wheel and tire setup were 19” wheels shod with 32” Goodyear All-terrains. That made for interesting driving on Nantucket’s soft sand beaches. Bob noted that “the deep soft sand is a sore spot for the Defender. While it has close to 12” of clearance, the angle of the suspension arms extending to each corner become sand plows or anchors in soft sand. The undercarriage, being pretty much a flat plate, also causes the body to float in that deep sand. So, I sense deep, powdery snow might create the same issues. However, while I can point to that small design issue, the positives far outweigh that one flaw I could find in its off-road capability. I bet that 18” steel rims and mud tires would allow better tire coverage at lower pressure.” (Indeed, Bob installed 18” alloy wheels with 33” BF Goodrich KM3s and a 1” lift, and reports significant improvement. -ed)

On Bob’s next long trip, he trailered a Series Land Rover out west to meet up with the Oxford Across America team of David Short and Mike McCaig. (See Winter 2021 issue. -ed) If the trailer’s extra weight inhibited the Defender’s pace in any way, Bob never experienced it.

This past September, Bob and Robbin trailered their 24-ft Airstream – all 4,651 pounds of it – with the Defender from Virginia to Moab, UT, for the Great American Rover Rally (GARR). “I drove across Kansas in a major wind storm at 70 mph with a 30-mph crosswind,” Bob recounts. “The extra length and width, combined with the independent suspension, make it more like an American pickup in terms of trailering. Towing up steep passes, with their resulting descents, did not affect the Defender. Towing a load over the Rockies can be disconcerting, but I had no issues.”

It’s the off-roading at Moab that truly demonstrated to Bob the capabilities of his new Defender. “Over the nine days of the GARR, I learned a lot more every time I drove it. The preset control settings for off road are good, but what really changed the vehicle for me was that I could program my own settings. I felt their settings demanded too many rpms, so I created new ones.”

If he could change anything about the Defender, what would it be? “I don’t like Land Rover’s concealed winch; it’s too low to the ground, and out east, it will get too muddy and wet all the time. I want to be able to see my cable spool onto the winch. Also, I wish the lower body panels (below the 18” mark) could be easily removed so as not to ding them up in more demanding off-road situations.”

“At the end of the day, the new Defender is still a tactile experience; if that’s what you love about the Defender experience, the new Defender will work for you. Or you can put it in the automatic settings and the vehicle will cover for your ineptitude or inexperience.”

Bob summed up this thoughts. “Land Rover has done a great job with universal appeal and marketability while meeting all the safety and emissions regulations of their different markets. In Moab, I was living the dream in 105-degree heat. The fact that this Land Rover allows us to drive across the country and tackle the most challenging trails – that’s a game changer. The new Defender is far better than I expected, and it’s allowed me to be able to go beyond my expectations.”